#Save_Dana: Why Is the Jordanian Cabinet Modifying Boundaries of Dana Reserve?

Jordanians took it to social media to denounce an order by the government to modify the boundaries of Dana Reserve with the aim of finding copper; believed to be hidden inside the Reserve in Tafila governorate.

According to media sources, around 20,000 trees were cut down and over 2000 acres destroyed in the Dana Reserve for mining operations.

Countries around the world are fighting wildfires to protect their forests and woodlands...in the meantime, Jordan decides to parcel out its biggest nature reserve for mining operations. Protect our reserves at all costs!!#انقذوا_ضانا pic.twitter.com/67hSz2O806

According to Chairman of the Board of Directors of the Royal Society for the Conservation of Nature Dr. Khaled Irani, the Jordanian cabinet decided to tear down large acres of the Dana Reserve without a permission describing it as a 'black day.’

Earlier report by the former Jordanian cabinet revealed that 27 million tons of copper tinged with gold laid under a simple depth underground across the area with 13 million tons can be found at Dana Reserve.

On the other hand, directors of the Royal Society for the Conservation of Nature reaffirmed its rejection of any measure in the Dana Reserve that requires cutting off any part of it under any pretext and for any reason.

In a press statement after the meeting, Irani said the Dana Reserve has a particular importance on the international level, as it is considered the first national reserve whose name is included in UNESCO as one of the most important natural sites in the world. 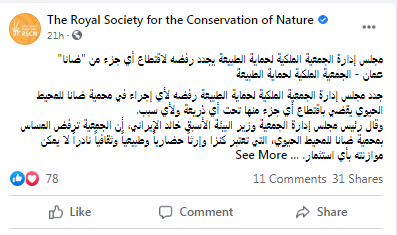 Jordanians have also added their voices in solidarity with the Dana reserve and preserving its boundaries as it is the home land to rare animals including Afghan fox, black eagle bird and it is homeland to over 70% of Syrian Canary birds.

Activists used several hashtags including '#انقذوا_ضانا ,محمية_ضانا #"- #Save_Dana and #Dana_Reserve to denounce the order of tearing down the area for finding copper and mining operations.

After years and years of protecting the natural organisms, habitats and species in the Dana Biosphere Reserve, we can not accept this in any capacity whatsoever. #Dana #save_dana #انقذوا_ضانا

Dana Biosphere Reserve is Jordan's largest nature reserve, located in south-central Jordan. Dana Reserve was founded in 1989 in the area in and around the Dana village and Wadi Dana comprising 308 square kilometres.

The threatened Nubian ibex, Syrian serin, caracal, and lesser kestrel are natives of Wadi Dana and plans to save the species were put forth by Global Environment Fund in 1994. Additionally, the largest breeding colony of the Syrian serin is in Dana Nature Reserve. Threats to the animals include hunting.