Palestinian journalist Shireen Abu Akleh and the American journalist Brent Renaud were both killed while covering news and unrest in different countries, Palestine and Ukraine. 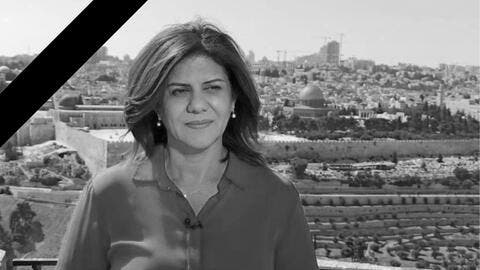 Abu Akleh was killed by Israeli live bullets while covering clashes at the Jenin Refugee Camp on May 11th while Brent Renaud, who is a journalist and a filmmaker, was killed in Ukraine on March 13th by Russian soldiers while covering the Russian invasion of Ukraine in Irpin city near Kyiv.

Thread/1 I wanted to compare in this case the @guardian reporting of the murder of Brent Renaud and the murder of #ShireenAbuAkleh . I will stick to the headline. Caveats at the end, but I just wanted to highlight a few obvious biases. pic.twitter.com/MZQuvRDT6B

What triggered social media anger is that both journalists were killed while reporting the truth about what is happening in Palestine and Ukraine. However, their death news headlines were covered in opposite ways by huge news agencies including "the Guardian and The New York Times."

Starting with The Guardian, which is a British daily newspaper, the stories of Shireen Abu Akleh and Brent Renaud were covered in different ways which made people suspicious of whether they are publishing the truth about what had exactly happened without taking any sides or being biased.

7/ Just a note, the Guardian article has update the subheading (but not the main heading), in a way that still creates ambiguity (albeit in a more hesistant way) pic.twitter.com/J9xYF6PHov

The Guardian wrote about Renaud's death: "US film-maker Brent Renaud reportedly killed by Russian forces in Ukraine;" later on, the newspaper changed the headline and removed the word 'reportedly'.

Activists have also shared how different the coverage was by the New York Times of the journalists' deaths in Ukraine and Palestine as the two headlines read: "Brent Renaud, an American journalist, is killed in Ukraine," while for Shireen it wrote: "Shireen Abu Akleh, Palestinian Journalist, Dies, Aged 51."

Israeli media have also covered the killing of Shireen Abu Akleh in an unclear way revealing that she might have been killed by Palestinian armed men adding that the Israeli government suggested opening a joint investigation with the Palestinian government to probe her death.

Moreover, Israel National News shared an opinion by Moshe Phillips with a title reading: "The death of an antisemitic journalist - should we mourn?".

Social media users have strongly condemned the headlines released by various news agencies saying that Shireen is just like Brent; they were both killed while doing their jobs and they deserve the same coverage without a twist of the facts.

Journalism is dead when reporters and journalists like #Shereen_Abu_Aqleh are killed for showing the truth and some other “journalists” twist facts. Shame on you #JournalismIsNotACrime #FreePalestine 🇵🇸 https://t.co/UE0UesboqU

Shireen Abu Akleh was a Palestinian-American journalist who worked as a reporter for the Arabic-language channel Al Jazeera for 25 years and was one of the most prominent names across the Middle East for her decades of reporting in the Israeli-occupied Palestinian territories. She was killed by Israeli forces while covering news in Jenin.

Brent Anthony Renaud was an American journalist, documentary filmmaker, and photojournalist.  He was killed on March 13, 2022, by Russian soldiers while covering the Russian invasion of Ukraine in Irpin city near Kyiv.