Is Spanish Crown Princess in love with football player Gavi?

Published November 30th, 2022 - 05:32 GMT
Spanish Crown Princess of Asturias Leonor (L) and Spain's King Felipe VI attend an "Audience with laureates", ahead of the 2021 Princess of Asturias award ceremony, at the Hotel Reconquista in Oviedo on October 22, 2021. (Photo by ANDER GILLENEA / AFP) 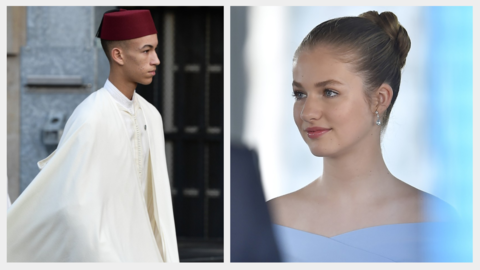 According to Spanish newspapers, Crown Princess Leonor is likely to have a crush on the Spanish football player. The princess is well-known for being a huge fan of FC Barcelona.

But what fueled the rumors further is that Gavi sent King Felipe VI a small shirt close to the size of the crown princess as a gift.

Debates ensued on the possibility that Gavi might be the coming Spanish king since Princess of Asturias, born in 2005, is the heir presumptive to the Spanish throne.

In May 2021, the Spain-based newspaper El Español started a rumor that the Crown Prince of Morocco and future Queen of Spain "might be in a relationship". The claim came after the princess was seen wearing a necklace with "حب - Love" emblem.

The king of Spain is currently in Qatar for FIFA World Cup to show support for the national team taking part in the tournament. Felipe VI personally congratulated the Spanish team after its victory over Costa Rica 7-0.