Storm in a Teacup: What do You Make of The Colour Changes to The French Flag?

ALBAWABA - On the social media block is the French flag! Well, the flag is not so much as getting a hammering but there is much vibes, if you see what I mean?

The social media does that with much posting galore, many feel they can write what they want electronically and feel all the better about the fact and afterwards.

The French Elysée have confirmed that the country’s flag has quietly been changed by President Macron. The blue is now a dark shade of navy, to be identical to the Tricolore of 1793. pic.twitter.com/oqcjWj8K7r

But seriously, and this is serious staff for Parisian politics, many are today writing about the subtle colour changes made to the French flag by non other than the man sitting in the Elysée Palace President  Emmanuel Macron himself. He has changed the color of the French flag from light Blue to dark navy blue. Sacrilege, it shouldn't happen, disaster, plain no, some might be saying! 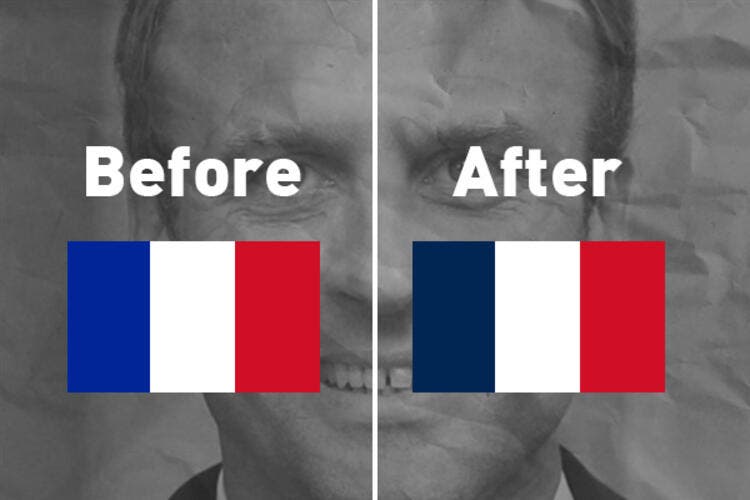 But hold on, this is not new you might say! And you might be right, for the changes started to be made from 2018 onward with darker flags placed behind Macron when he made his speeches. As well, the darker versions were hoisted on the Elysée and other presidential buildings since 2020.

Funny that, because nobody noticed them till now or nobody made a fuss that is till a book came out outlining these changes. It was then the social media started their chats, tweets and comments. Hick up, obviously they needed to wake up from their dose.

And the social media rants began about the likes and dislikes. What was/is more preferable the light blue or the dark blue. There was talk about percentages and fractions and shades of color, some people wanted the light blue, others said "no" they definitely see the present turnaround dark navy blue as more dignified and some compared the changes with Adam West of Batman. I can't actually figure out the analogy but this is the social media and "people talk".

Again, this is serious stuff for the French Republic, flag changes that shouldn't be undermined or downplayed for the Paris political establishment. But many social media buffs having a field day.

Macron today would argue he agreed to the changes to reflect a strong republic, as a symbol of the French Revolution of 1791; the colour change goes back to tradition. Its about status and French power in the world. This is what flags represent for many countries in the world and it is a return to the memory of Charles De Gaulle, his nationalism and views of power.

The change of course to the light blue was made wholly for practical reasons. President Valéry Giscard d'Estaing, in 1976, decided he wanted lighted blue because it basically looked good on television because of the lighting and it tallied with the European flag that represented the continent's then Common Market that preceded today's European Union. It was said that as a strong Europhile d'Estaing wanted to reflect a "good French image" as supporter of borderless community which was still waiting to happen.

But hold no, the story becomes more complicated. In the light of what Macron just did - will started doing since three years ago - today, many netizens are saying there is a rift between Brussels and  Paris , adding there is now a "blue war" between the two. But French officials are terming this ludicrous and the flag adjustment is a domestic affair.
Also when bloggers talk about a so-called "Blue War" it is often forgotten that the deep navy  blue was always used by the French Navy, never once changing, even when the country switched to light blue.

It's indifferent to me, but navy blue is my favourite blue so, the new one is best.

Is what happening now just a storm in a teacup with many on the social media just searching for new topics to write about?