Is Trump Calling for a Civil War? Calls to 'Liberate' Several States and to Defy Stay-At-Home Orders

Published April 19th, 2020 - 07:45 GMT
Governors of several states have refused the president's plans to reopen the country before the virus is under control. (AFP)

After several tweets calling on residents of US states with Democratic governors to "liberate" their states and challenge stay-at-home orders, US President Donald Trump has been accused of inciting violence and according to some people "calling for a civil war".

LIBERATE VIRGINIA, and save your great 2nd Amendment. It is under siege!

In a series of tweets, Donald Trump expressed his dissatisfaction with governors' decisions to impose lockdowns on their states in efforts to contain and control the novel coronavirus outbreak.

Concerned about a potential economic collapse after weeks of slowdown that has caused about 16 million Americans to lose their jobs, the US President has often promised to reopen the country as soon as possible. The President has also been blamed for rushing into reopening, by people who linked his remarks to his efforts to carry on with his re-election campaigns and planned rallies across the States.

?Trump's “liberate” comment
?why chaos agents are particularly dangerous right now, and
?what we need to do.

Spoiler: Trump's way to win the election is to get the fighters fighting and keep them fighting.

It's cynical and desperate. pic.twitter.com/VYJvZXk1ov

Why bring out a confederate flag?

Brookfield WI protest against stay at home orders. It’s for the health and safety for our loved ones and community. This act is endangering all of our safety. pic.twitter.com/gn0mfiPTXe

On the other hand, governors of several states have refused the president's plans to reopen the country before the virus is under control, especially after the country has witnessed yet the highest global record of confirmed cases; mounting to almost a million cases and about 40k deaths.

So you go on tv and say we should re-open in an orderly, intelligent, healthy, safe, fact/data-based way...and then the next day you tweet support for a bunch of machine-gun-toting lunatics who clog traffic and menacingly demand re-opening without ANY of those precautions...

Trump's calls have ignited reactions by many of his supporters ,who took to the streets in several states including Texas, Minnesota and Ohio defying social distancing rules and demanding an immediate lift of the lockdown, to avoid an economic disaster.

The funny thing about Trump trying to incite another civil war is that his supporters fly the flag of the side that lost the first one. 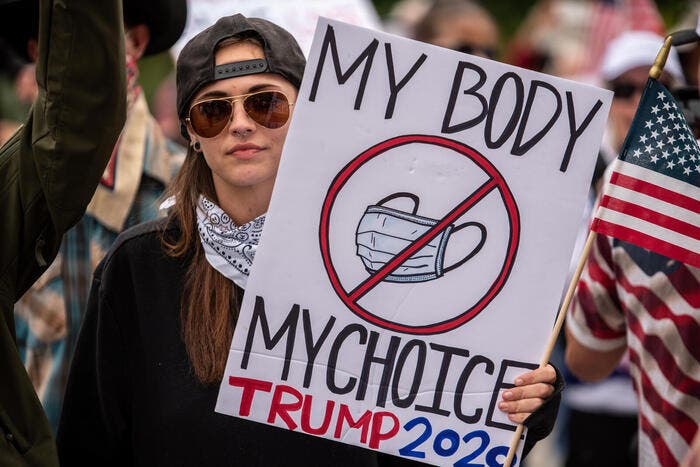 Some protesters were seen with their guns and confederate flags holding signs that referred to lockdown decisions as "oppressive" and "tyrannical." Protesters also chanted slogans against the director of the Center for Disease Control and Prevention Dr. Anthony Fauci, demanding that he gets fired.

Some signs also showed rejection of wearing protective masks and a refusal to receive anti-covid19 vaccines once they are ready.

This is the “liberate” protest happening now in Austin, Texas.

It looks like they packed themselves as close together as humanly possible.

Before chanting for the firing of the only intelligent member of Trump’s coronavirus task force.

How sad, over 800 Minnesotans willfully ignored the shelter-in-place order today, putting their health and the health of their friends, neighbors, and loved ones at risk. I pray that none of them get sick because guess who is not going to help when they do- @realDonaldTrump. pic.twitter.com/6JcIEpLaeM