Published August 23rd, 2021 - 06:14 GMT
Photos posted by the US Department of Defense have all focused on showing a humanitarian effort by US Marines. (Facebook: DeptofDefense)

Amid hectic efforts to evacuate foreigners and thousands of Afghans who have been trying to leave Kabul in the wake of the Taliban's takeover of Afghanistan, photos of US Marines taking care of Afghan babies and civilians both at Kabul airport and another military basis have stirred many online debates. 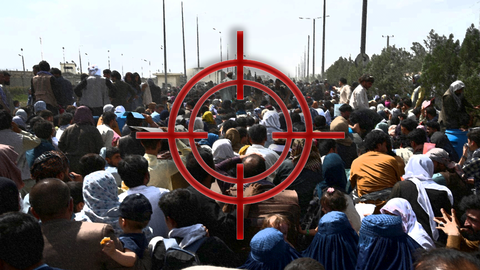 While many online people applauded American soldiers for helping out Afghan civilians who are seeking asylum in western countries, fearing persecution by the Taliban, others weighed on the tens of photos shared by US government departments online, as they mostly aimed at showing a humanitarian aspect of the US army.

On their official Facebook pages, the US Department of Defense has been sharing photos showing US Marines comforting Afghan babies whose families are waiting for their flights out of Afghanistan at Kabul airport, almost a week after the Taliban took full control of the country.

The Facebook page has also shared photos of US soldiers as they helped Afghan elderly people and families moving across different terminals of the Hamid Karzai International Airport. More photos showed US soldiers playing football with Afghan kids at a US military base in Germany, to which thousands of Afghans have been evacuated so far.

Online people sharing these photos have questioned the point behind them, especially that it comes at the end of 20 years of US military presence in Afghanistan, during which more than 70,000 Afghan civilians were killed.

Worth noting that our drone program has killed thousands of Afghan civilians, with Human Rights Watch reports indicating that upwards of 40% of those casualties (~1,600 people) between 2016-2020 were children.

Some social media users suggested that the photos are part of a public relations campaign to "whitewash 20 years of war crimes committed in Afghanistan," during which many human rights violations were committed by US soldiers against Afghan civilians. 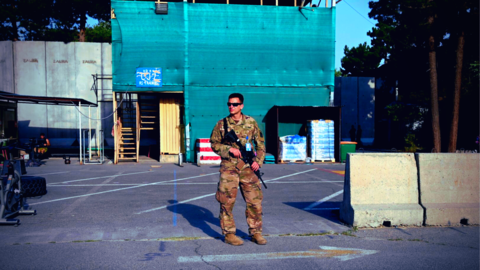 US-Afghan Govt Corruption Behind the Fall: ‘Afghan Army Hasn’t Been Paid in Months’

This tweet reflects the long term effects of bad apples. Crushing for decent committed service personnel who close with the enemy, who treat POWs as per. Who treat civilians with respect and compassion. The vast majority. But keyboard warriors….fainéantes https://t.co/I5tS4dfJzX

Meanwhile, other comments defended the US military, saying that the actions of few soldiers have had a long-term negative impact on the institution's reputation worldwide.

According to US President Joe Biden, the US has evacuated nearly 28,000 people from Afghanistan between the 14th and the 22nd of August 2021.

Disabled Palestinian Shot in The Foot by Israeli Soldiers Near Bethlehem

‘Walking Through the Streets and Killing Everyone’: Fox News Commentator Offers a Rescue Plan For Americans in Kabul
© 2000 - 2021 Al Bawaba (www.albawaba.com)