In a statement released by the former US President Donald Trump on Monday evening, Trump protested the FBI "raid" that searched his residence known as Mar-a-Lago in Palm Beach, Florida, calling it "a prosecutorial misconduct".

Since the search comes at a time Donald Trump promises his supporters of running again for the presidential office in 2024, the former president called the FBI raid a "weaponization of the Justice System and an attack by Radical Left Democrats who desperately don't want me to run for president in 2024".

Trump supporters have gathered outside of Mar-A-Lago.

"I can't wait for this to happen to Joe and Hunter" pic.twitter.com/cr4b36lo8E

Trump's statement which he posted using the online social platform he created in 2021, Truth Social, included a strong condemnation of the FBI search, as Trump considered his residence in Mar-a-Lago "under siege, raided, and occupied by a large group of FBI agents".

Several hours later, dozens of Donald Trump's supporters showed up near his Mar-a-Lago residence holding Trump flags and banners, expressing discontent with the FBI search and showing support for the former president.

Meanwhile, US local media has pointed out that the "court-authorized" raid was part of an ongoing investigation into Trump's possible "mishandling of classified documents" that may have been sent to his current residence, where he has been living since leaving the White House in January 2021.

"Such an assault could only take place in broken, Third-World Countries. Sadly, America has now become one of those Countries [...] they even broke into my safe!" - Donald Trump 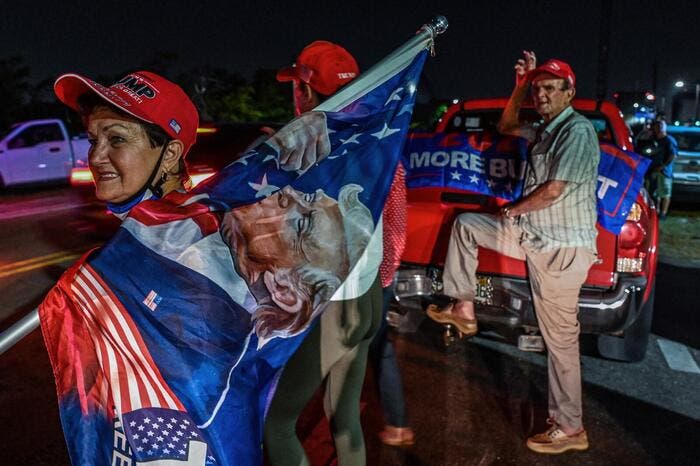 In recent months, US authorities have grown concerned over the possibility of classified documents being "mishandled" by Donald Trump after he left the White House. These concerns led to the recovery of 15 boxes full of documents, including highly classified texts Trump took to his Florida property in 2021.

According to the Washington Post, documents recovered last February included written communications with Barack Obama, the former US President.

Other reports have cited former White House staff who said they used "to regularly find documents clogging toilets in the building", pointing out it may have been Donald Trump's way to get rid of important documents.

🚽FIRST on @axios: Trump’s telltale toilet … ⁦@maggieNYT⁩ obtained these photos ahead of the Oct. 4 publication of her book “Confidence Man”

Source tells her pic on the left shows a White House commode
Pic on the right is from a Trump overseas trip https://t.co/6opWty4kjd

As per US laws, criminal charges can be pressed against Donald Trump for failing to preserve such classified exchanges after leaving office, especially if they are closely connected to administration duties. Moreover, if Donald Trump was indicted for mishandling official documents, he could be disqualified for the 2024 presidential elections.

LMFAO, they spent years chanting "lock her up" about Hillary Clinton, but she hasn't been visited by the FBI and trump's a lot closer to being locked up than she is.

In response to the FBI raid in the Mar-a-Lago, many Republican figures have come in defense of Donald Trump, highlighting the Hillary Clinton email scandal that was revealed in 2016, when the former first lady was using her personal email for official correspondence when she was serving as Secretary of State.

''How about the Benghazi scandals? ... you want to talk about scandals that were never investigated?" -- Eric Trump pic.twitter.com/5YAAZVduMi

Eric Trump also cited the incident during a TV interview with Fox News, saying Clinton's documents did not lead to investigations the way his father is being treated.