Is Annexation Real or an Electoral Ploy? 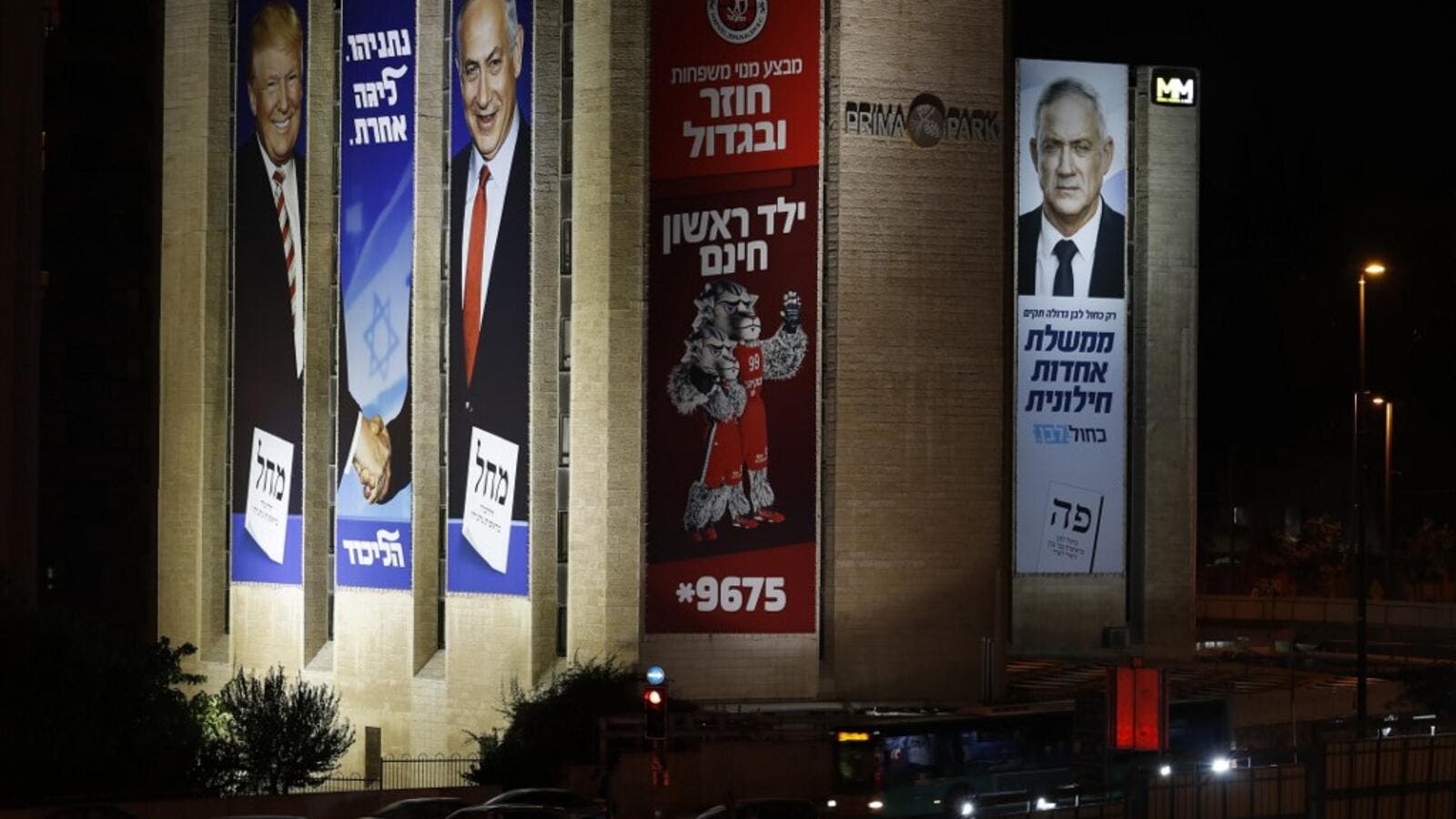 Israeli election banners and advertising hanging from a building in Jerusalem, (L to R) for the Likud party showing US President Donald Trump shaking hands with Likud chairman and Prime Minister Benjamin Netanyahu with a caption in Hebrew reading "Netanyahu, in another league"; an advertisement for Hapoel Jerusalem Basketball Club; and for the "Blue and White" (Kahol Lavan) electoral alliance showing the face of retired general Benny Gantz and a caption in Hebrew reading "only with the Blue and White will create a united secular government". AHMAD GHARABLI / AFP
Highlights
At the same time, Israeli society engaged in an incredible demonstration of cognitive dissonance with its commitment to peace negotiations and a two-state solution.

If you had not been paying attention, it would be easy to overlook just how critical the upcoming Israeli general election is for the future of the Israeli-Palestinian conflict.

It could decide whether Israel maintains the status quo of its occupation of the West Bank or takes bold, if deeply unwise, steps to annex the entirety of the territory. Indeed, it could plunge Israelis and Palestinians alike into a dangerous maelstrom of uncertainty.

Before we unpack the specific threads, we must consider the two ends of the Israeli political spectrum, namely the “control” camp and the annexation camp.

Since 1967, the occupation has been all about control of the Palestinians. Instead of extending full rights through either the creation of a Palestinian state or the annexation of Palestinian land into Israel, military planners, from the outset, crafted an elaborate system of control. Most tangibly, there is the physical separation of Palestinian towns and cities from each other by roads and checkpoints. This road network has enabled Israelis to build settlements within easy reach of major Israeli population centers in Jerusalem and Tel Aviv. In turn, the settlements have transformed into cheap bedroom communities for Israelis with jobs in the center of the country. The separation barrier, completed last decade, is a towering monument to the Israeli control strategy.

At the same time, Israeli society engaged in an incredible demonstration of cognitive dissonance with its commitment to peace negotiations and a two-state solution. Every Israeli who has stepped foot in the West Bank or East Jerusalem, either as a civilian or as a solider, understands perfectly well that a viable two-state solution is a geographic fantasy. Too many resources have been poured into the occupation to allow for an equitable division of the land into two states; to allow a free Palestine to take over infrastructure that is intrinsically linked on an operational level to Israel. But the notion that land could be exchanged for peace, and the fantasy that Israel was negotiating in good faith for the creation of two states, allowed

Israelis to escape the psychological burden that comes from being responsible for keeping millions of people under military occupation.

The occupation is now a well-oiled machine. Israel has perfected the art of control through military presence and technological prowess. The economy is strong and many Israelis are content to focus on domestic matters, as if the Palestinian issue was the least of their concerns.

But there is one problem: Donald Trump.

While the control camp has long defined mainstream Israeli politics, with left and right-wing governments alike responsible for entrenching the occupation, there have been loud calls for annexation in recent years. Although there were discussions early in the occupation about annexing the West Bank, they were quickly dismissed by military planners. Annexation at that stage in Israel’s history would have created insurmountable demographic challenges, they argued. And, for the most part, they won. Until now.

The settlement project expanded in the 1970s and 1980s. But it has only been in recent years that right-wing politicians have begun to use annexation as an election platform. They just did not realize what kind of Pandora’s box they opened.

With the election of Trump in the US, annexation proponents may have found their ultimate partner. Trump’s ambassador to Israel, David Friedman, has been laying the diplomatic groundwork for annexation with statements essentially providing American support to any effort. While annexation for Israeli politicians is mostly a means toward power, for Trump and his administration it is actually seen as a real end goal.

And therein lies a huge problem for Israeli society. Annexation, should it happen, would unravel decades of Israeli military planning in the West Bank and Gaza Strip that was designed to control Palestinians without having to extend them citizenship. In addition, Israeli society is woefully unprepared for annexation. Would full rights be extended to Palestinians in the West Bank the day after annexation? If not, how would Israel deflect the apartheid label? And, if West Bank Palestinians were to become Israelis, what about the demographic impact of millions of non-Jews being incorporated into the Jewish state? In no uncertain terms, annexation would be the end of Israel as it is today and lead to an existential crisis at every level of the state.

The control camp and annexation camp are battling for the mainstream vote. Benny Gantz, the former Israeli military general and chief rival of Benjamin Netanyahu, represents the control camp, and his party has been running ads warning about the annexation threat.

Netanyahu, for his part, is attempting to appease both sides — overtly to one faction and implicitly to the other. In the last two weeks, he visited major settlements and promised that his government would extend “Jewish sovereignty” to the West Bank. The term is essentially meaningless, but highlights the growing passion for annexation in the Israeli electorate. Of course, Netanyahu has been on the political landscape long enough to understand the grave dangers that annexation creates for Israel. Therefore, he has also quietly acknowledged that he would not go through with any concrete plans if he wins.

All the machinations notwithstanding, it is clear that the annexation camp is getting stronger, and that it could markedly shift the status quo in the next election cycle. Considering the fact that Palestinians already live under military occupation, any shift in the intolerable current situation might actually be welcomed. The problem is, the absolutely uncharted uncertainty that annexation would usher in should frighten everyone, Israelis and Palestinians alike.

Joseph Dana, based between South Africa and the Middle East, is editor in chief of emerge85, a lab that explores change in emerging markets and its global impact. Copyright: Syndication Bureau