Iranians to Protest Coming Polls by Not Voting 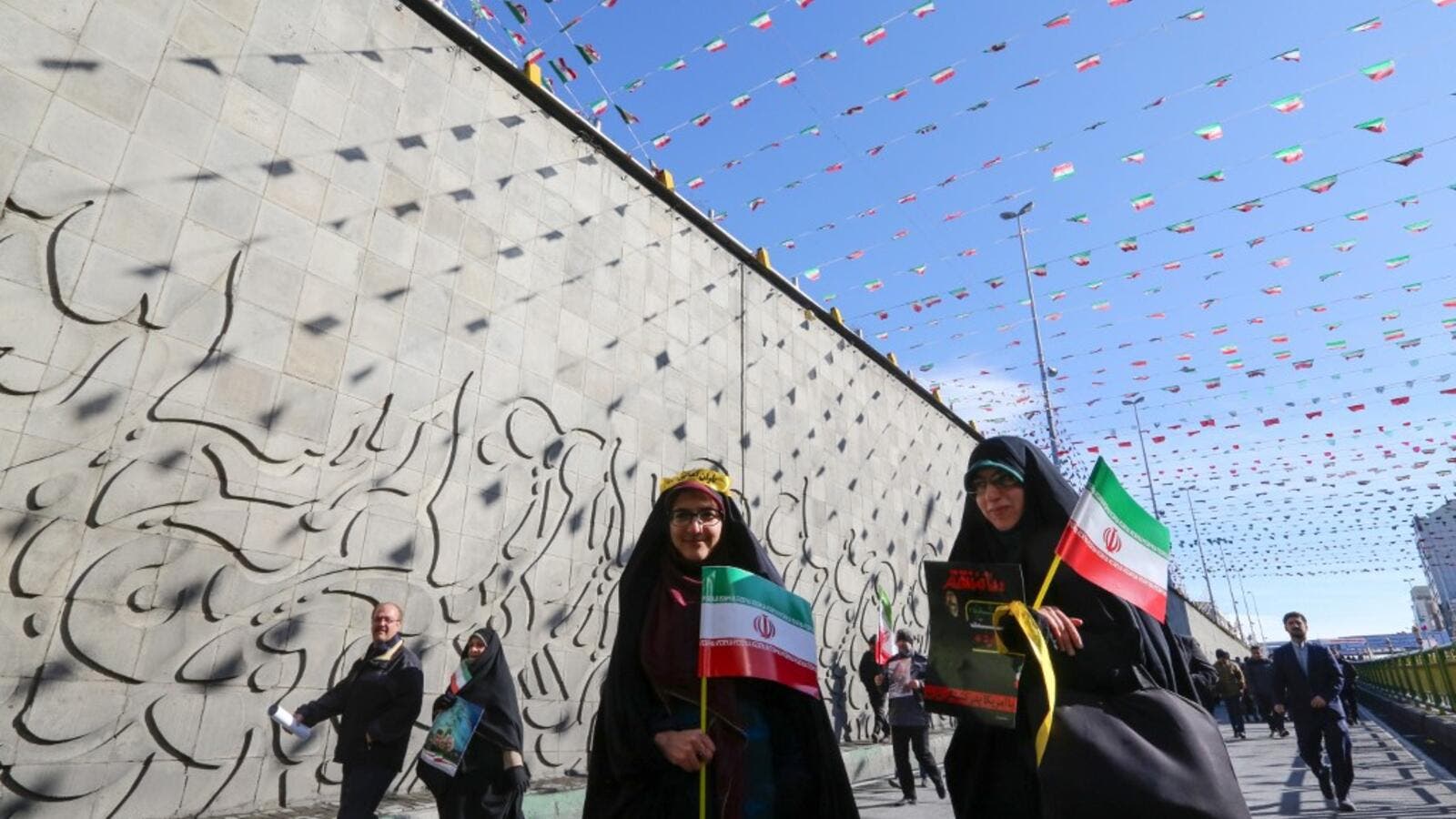 Iranians attend commemorations marking 41 years since the Islamic Revolution in the capital Tehran's Azadi Square on February 11, 2020. Thousands of Iranians massed for commemorations marking 41 years since the Islamic Revolution, in a show of unity at a time of heightened tensions with the United States. The celebrations mark the day that Shiite cleric Khomeini returned from exile and ousted the shah's last government. ATTA KENARE / AFP
Highlights
Instead it gives a civilian, secular, softer impression with more modern young images and women in looser headscarves.

The downing of the Ukrainian airliner, a harsh crackdown on protests and a drastic vetting system could mean Iranians stay home in large numbers on election day.

Ahead of Iran's parliamentary elections scheduled for February 21, hardliners led by the Supreme Leader Ayatollah Ali Khamenei and the Islamic Revolutionary Guard's Corp (IRGC) are using two simultaneous tactics to control the parliament and increase participation.

The Iranian regime's popularity is diminishing following the downing of the Ukrainian airliner in January and the violent crackdown of last November's protests.

The regime is, on the one hand, engineering the disqualification of almost all reformists through the vetting system, and on the other hand, is portraying a more secular and nationalist image to spur a larger turnout of the educated middle classes and the young.

A new IRGC poster displayed in a strategic position in the capital, Tehran, speaks to the latter election tactic. It is no longer strictly Islamic or carrying the usual revolutionary jargon.

Instead it gives a civilian, secular, softer impression with more modern young images and women in looser headscarves.

The accidental downing of the Ukraine Airlines on January 8 which killed all 176 passengers including 15 children, has severely damaged the IRGC's image especially with the middle class and the educated young. Most of the passengers fell into those demographics and three days of official denials and no expression of regret or an apology has enraged them.

Yet in his rare appearance leading the Friday prayer leader on January 17, Khamenei showed no signs of remorse, nor did he order the sacking or reprimand of the IRGC officials responsible.

Instead, he gave the IRGC full support and diverted attention to elections. He approved the extreme vetting by the Guardian Council which has disqualified about a third of sitting members of the 290-member parliament.

Prominent reformists such as Mahmoud Sadeghi published their official rejection letters accusing them of lack of loyalty.

A recent poll by the Iranian Students Polling Agency (ISPA) indicated that over 44 percent of the respondents across Tehran province say they will not take part in elections, only 21 percent will.

In a separate report, ISPA said all recent polls indicate that people are increasingly apathetic and this has increased since the November crackdown.

Sadeghi singles out this apathy as the reason why many reformists such as Mohammad Reza Aref and Parvaneh Salahshouri decided not to take part in the elections.

A cross-examination of election data indicates provinces with the highest fatalities in the November crackdown are likely to see limited participation.

Ignoring the national outrage, Khamenei has spoken about those who plan to boycott the elections as "enemies".

Yet Ayatollah Khamenei admitted he had heard the calls for his downfall: "Perhaps, someone doesn't like me," he said, "but if they like Iran, they should come to the ballot box," he pleaded.

Another senior ayatollah, Makarem Shirazi, also admitted there was "discontent" but said it shouldn't mean turning away from the ballot box.

IRGC's weekly magazine, Sobh-e Sadeq, warned in its December edition that trust should be improved and its editorial called for a kinder approach.

That could explain why the IRGC poster displayed in the strategic Vali Assr Square, aims to portray a softer, more secular and nationalistic image to bring in votes. This is the spot where official billboards usually communicate regime thinking.

For that reason it has been the subject of much social media debate, often sarcastic and dismissive.

A prominent aspect of the poster is that half of the women portrayed are not covered in the stricter hijab and men are also mainly young and 'modern' looking. There are no ayatollahs or military figures except for the iconic figure of General Qasem Soleimani who was killed by a US drone strike February 2 in Iraq.

The large message on the poster avoids any mention of Islam. It reads 'Long Live Our Dear Iran and My Life for Iran', which is taken from the slogan of 2009 protests: 'No Gaza, No Lebanon, My Life for Iran'.

Despite the softer appearance, the most harrowing part is the image of a young boy in the front, presumably symbolising the future generation. He is using the same hand gesture as Hezbollah’s leader, Hassan Nasrallah, in his speech after Soleimani’s killing.

Nasrallah vowed a bloody retaliation signaling with his hands that every US soldier who comes to the region will leave horizontally in their coffins.

The Islamic Republic of Iran, as with all authoritarian regimes, has  for far too long tried to manipulate support through a variety of tactics engineering electoral success using an unfair playing field.

This year too, there is an array of hardline conservative candidates dominating the elections with only a small coalition of unknown reformists.

Yet on its forty-first anniversary the main problem for the regime is whether it can muster sufficient voter turnout even to validate its elections.

Dr. Massoumeh Torfeh is a Research Associate at the London School of Economics and Political Science specialising in Iran and Afghanistan. Formerly she was a BBC journalist and UN spokesperson and director of communication.