Mourning Lebanon: Will Politicians Come to Their Senses?

Published August 3rd, 2021 - 08:45 GMT
Lebanese demonstrators wave national flags on a highway linking Beirut to north Lebanon, in Zouk Mosbeh on October 19, 2019, a day after demonstrations swept through the eastern Mediterranean country in protest against dire economic conditions. (JOSEPH EID / AFP)
Highlights
It was a grim tragedy that continues to haunt the Lebanese national consciousness one year after the bloody mayhem the explosion created.

Lebanon is in morning. The 4th of August is being declared as a national day to mark the mass victims of the Beirut Port blast that shattered the city with 217 killed, over 7000 injured and over 300,000 people displaced. 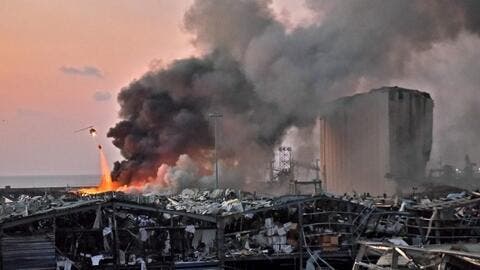 One Year on! After The Explosions Lebanon Worsens

It was a grim tragedy that continues to haunt the Lebanese national consciousness one year after the bloody mayhem the explosion created.

People still find it difficult to fathom that loved ones – parents, daughters, moms, dads are no longer there. They are refusing to become a figment of the imagination of those that are still living. These families are talking about justice but that word has become illusive.

In all honesty, for the government to mark this day as a national tragedy is not the best way to go about things or deal with the emotional scars the explosion left behind. Lebanon and its people went through a catastrophe of gigantic proportions according to world standards being as the biggest non-nuclear disaster ever. The least that can be done is to get to the bottom of what actually happened, how did a fire in one warehouse lead to a large inferno and a blast and who was behind the 2,750 tons of the ammonium nitrate that exploded on that August evening in the Beirut Port and sent the city into a deadly tailspin of bloodiness, deaths and destruction. In whose interest was it to unload the deadly nitrate on the Beirut Port and why store it there since 2013.

We are told everyone knew how dangerous and potentially destructive the stored material was but subsequent governments chose to turn a blind eye.

One would have thought it would have been easy to appoint a commission of inquiry, and the government did so, first Fadi Sawan and later Tariq Al Bitar to examine what happened, who was responsible for the explosion and why was the deadly material was stationed in the port.

Beirut explosion ‘Ask Me Anything’ hosted live by Bel Trew one year on https://t.co/hOeEom6kwR

But both judges got nowhere. Sawan was dismissed when he sought to lift immunity on politicians, ministers and officials to question them. He wanted also to question the present caretaker prime minister Hassan Diab and ex-ministers Ali Hassan Khalil and Ghazi Zeiter. This action was quickly blocked and the judge was fired in early 2021. It was said at the time Diab was visibly ired by Sawan as if to say "how dare he."

Then came judge Tariq Al Bitar. He is currently facing the same problems and potholes, unable to move with the inquiry one iota forward because of the refusal to lift immunity.

He is presently stuck as Minister of Interior Mohammad Fahimi refuses to allow him to question Major General Abbas Ibrahim, the head of the General Security Agency and get on with the inquiry.

Thus, its being termed as a simple inquiry that many politicians don’t want to see being investigated because of the ‘can of worms’ it would unleash despite the heartache that continues to bite the families of the victims that uselessly died.

In many ways, the Beirut blast represents a Lebanese malaise that starts from the top of the political establishment and goes downwards with many seeking to ignore the deadly affair as something that has passed over.

Nearly a year after the Beirut explosion, this Lebanese couple say they are still haunted by the blast that happened on their wedding day pic.twitter.com/fIhLEFlt5R

After the blast the government of Hassan Diab resigned but it still continues to govern in a caretaker capacity one year after. The present Prime Minister-Designate Najib Mikati is now the third premier that is now tasked to form a government and try and get Lebanon out of the economic mess and deprivation it is in.

Before him was Saad Hariri who resigned after nine months of trying to form a government but in the end he couldn’t, with his task being frustrated by non-other than the Lebanese President himself Michael Aoun who wanted a ‘block majority’ over the Christian ministerial seats in government.

On a visit to Lebanon, Ronaldinho laid flowers at the Beirut fire brigade headquarters in remembrance of civil defense members killed by the 2020 Beirut explosion 🙏 pic.twitter.com/egzOvqItAV

Hariri wouldn’t accept that and after months of trying he submitted his resignation. Before that, Mustapha Adib was appointed as a premier-designate to put a cabinet together but he resigned after one month because of the more-or-less the same reasons. Under the Lebanese confessional system of government, the President is always a Christian appointee, the Prime Minister is a Sunni, and the Speaker of Parliament a Shiite.

However, Aoun has always wanted to play a strong hand in who the prime minister appoints in government and this is what’s leading to delay and recriminations despite the incessant calls from the international community at the forefront of which is the United States and France to form a government, create a stable cabinet, deal with problems, fix policies.

I took part in Sunday Mass in Montreal to honour the victims of the Beirut explosion as we near its somber 1-year anniversary.

Our hearts are with the victims & their families. We will continue supporting the Lebanese people & calling for a full investigation & accountability. pic.twitter.com/DYZ205Chvb

But like the Port blast inquiry forming a cabinet is becoming Lebanon’s Achilles’ heel – all the elements are there but no one wants to touch and actively work on blocking. But this is devastating an already bad economic situation made worse by the $15 billion damages caused by the Beirut explosion that created a city in scars, a bleeding metropolis that was once dubbed as the Paris of the Middle East.

And then came the coronavirus which hit the world and the Lebanese economy by storm, beginning 2020 in the form of incessant lockdowns and infections that had its toll on different sectors. Lebanon, wobbling as it is, became in desperate need for outside aid, including that from the World Bank and European Union.

But most of this was stopped because of the failure of the political classes to form a functional, reliable government. This is what outside donors want as implicitly 'no government, no aid'.

The amount of ammonium nitrate that blew up at #Beirut port last year was one fifth of the shipment unloaded there in 2013, says FBI. One fifth... Hard to imagine what it wouldve been like if it all blew up... #BeirutExplosion #Lebanon #BeirutBlast
,https://t.co/TzWkfcwz8u

Meanwhile the country reels under its worst economic crisis ever with everyone disparate to make ends meet. The World Bank suggests Lebanon stands as one of the top three worst crisis-ridden countries since the 1850s with employment at 35% to 40%, food inflation at 400% and the Lebanese pound at 21,000 to the dollar. People are angry, frustrated and in a state of anguish that their savings are vanishing into thin air.

United Nations studies suggest over 85% of families are unable to meet the new costs and cutting down on fruits, vegetables and meat with the consumer price index increasing by 208% between April 2019 and April 2021. Other reports suggest over half of the people are living in poverty and which explains the protests and rallies taking part in Beirut and the rest of the country, now and before the onslaught of the coronavirus in 2019.

Rawan was killed during the Beirut explosion while working as a waitress at the popular Gemmayze spot, Cyrano. Her photograph still hangs on their wall. 💔

Thanks to the politicians, the ministers and right up to the presidency, the country is being labelled as a failed state. Of course this could all change quickly by the release of the awaiting international funds and aid but this needs domestic political resolve as this doesn’t appear to be coming any time soon.

However, many suggest that with the appointment of Makati, with many MPs supporting his designation, as well as that of Aoun, he could form a government quickly and unleash the desperately needed funds, however with Lebanese politics, its touch and go. One never knows who is really in control inside the country and what is the interest in not forming a government and who will ultimately benefit?

Workers install a monument inside Beirut port as a remembrance for the victims of the 04 August harbor blast in Beirut, Lebanon, 27 July 2021.
📷 epa / Wael Hamzeh#beirutexplosion #epaphotos #visualizingtheworld pic.twitter.com/r4QmCeg2eG

Lebanon is a government unto itself! Its politics between the factions and the man-in-the-street doesn't really matter.