Saudi Crown Prince Mohammed bin Salman is definitely being rehabilitated. He is no longer ostracized not the international pariah he had become after the murder of Jamal Khashoggi in the Saudi Consulate in Istanbul in 2018. Today he is very much being courted right from the top of the western pyramid starting with the United States with its president Joe Biden right down to its allies in Europe.

His recent visits to Greece and France with Turkey earlier, and the Biden special sojourn to Jeddah in the middle of July, after trashing the Saudi human rights record, mean all water is now under the bridge, as far as the Khashoggi murder is concerned. The young Saudi MBS is not only rehabilitated in western eyes but even courted and cajoled most of all because of Riyadh's place on the international oil roadmap and the ability to control and global market. What's making him look palatable as well, is the way he is approaching the Khashoggi slaying, acknowledging it was by rogue operatives.

The autocratic Saudi crown prince was given a private reception at the Acropolis in Athens, the birthplace of democracy 2,500 years agohttps://t.co/hf6oEm0UZR

In Greece and France, the Saudi Prince at the head of a delegation of 700-member delegation was greeted in an incredible style of pomp and ceremony and by the signing of mass agreements, protocols and promises of oil and gas. These indeed signaled the beginnings of a new chapter between Europe and Saudi Arabia with the expectance of a new dawn. Although this has clearly upset many people involved in fighting for the upkeep of human rights and dispossessed, this is hard-nails politics and the age of pragmatism, realpolitik and perhaps a touch of opportunism.

The issue that hit the nail on the head may have been the Russian adventure into the Ukraine, a war Moscow started last 24 February but continues till this day with no end in sight. Indeed, many world leaders including Emmanuel Macron believe the conflict would be a long-time affair with harsh consequences for the world and its global economy. Its as if everyone needed another global disaster soon after the Covid-19 crisis that begun at the end of 2019 and set the world on a tailspin of mass recession.

Biden and Mohammed bin Salman are not on good terms right now over the Khashoggi killing. But this oil could be going to our European allies. The United States is already exporting 74 percent of its liquefied natural gas to Europe. pic.twitter.com/V0t9hQFSPi

The Ukraine crisis has made things worse in terms of energy supplies of oil and gas. First prices rocketed upwards immediately after the start of the war. With media talk about the oil price forecast reaching to as much as $300 per barrel – thankfully, it didn't reach that level, stabilizing at around $100 – western leaders came to express much concern nevertheless, expressing fear of recession and inflation starting with Biden and moved eastwards. The US president was eyeing the November mid-term elections and American voters whilst European leaders had other worries.

President Emmanuel Macron made a plea to Saudi Crown Prince Mohammed bin Salman to help Europe move away from Russian oil and gas during a one-to-one dinner at the presidential palace in Paris https://t.co/t3hqdih2hv

Europe in particular, is in a state of flux because 40 percent of their energy supplies comes from Russia, a country which they condemned for militarily moving into Ukraine. For a moment, they had to weigh their situation very carefully and soon proceeded to find other alternative sources to Russia gas.  One of these countries became Saudi Arabia and the other Arab oil exporting countries.

Biden had eaten his words on Khashoggi and had long been courting Saudi Arabia that is essentially playing hard to get despite vague promises of increasing production though the word is out the 36-year-old Saudi strongman would only say he would consult with his OPEC + partners including Russia over possible hikes in the oil ceiling though this is done on share basis with other oil states.

What a friendly welcome for HRH Mohammed bin Salman in #France and #Greece!

With European desperation for alternative oil sources Bin Salman also sought to play the game of political gesticulation and brinkmanship of seeking to get out of his international isolation imposed since the murder of Khashoggi. Since then, he sought to take the initiative and go to Europe having been given the green light by such leaders as Biden and before him countless others such as the now beleaguered British prime minister Boris Johnson who first went to Riyadh for oil appeal between quickly came back empty-handed.

#SaudiArabia’s Crown Prince Mohammed bin Salman attends signing of MoU between the Kingdom and #Greece for cooperation in the cultural field, and tours Acropolis Museum and site in #Athens

Once MBS got to Europe, he quickly put on his charm offensive with the Greeks by signing with them billions of dollars worth of projects – 17 bilateral agreements with them alone – and telling them he would light up the streets of southern Europe with badly needed electricity and cheaper energy whilst being treated at dinner and the world-famous Acropolis Museum.

The same charm offensive was used when he got to the next stage of the European tour when he stayed overnight in France where he had dinner with Macron and other top politicians at the Elysee Palace, giving the impression that it was business as usual with the Europeans, of deals and bilateral cooperation.

Both Macron and the Greek Prime Minister Kyrios Mitsotakis visited Saudi Arabia since 2018 and that may explain why Bin Salman decided to make his European trip to these two countries first because of the rapport that have already been developing between the three leaders. 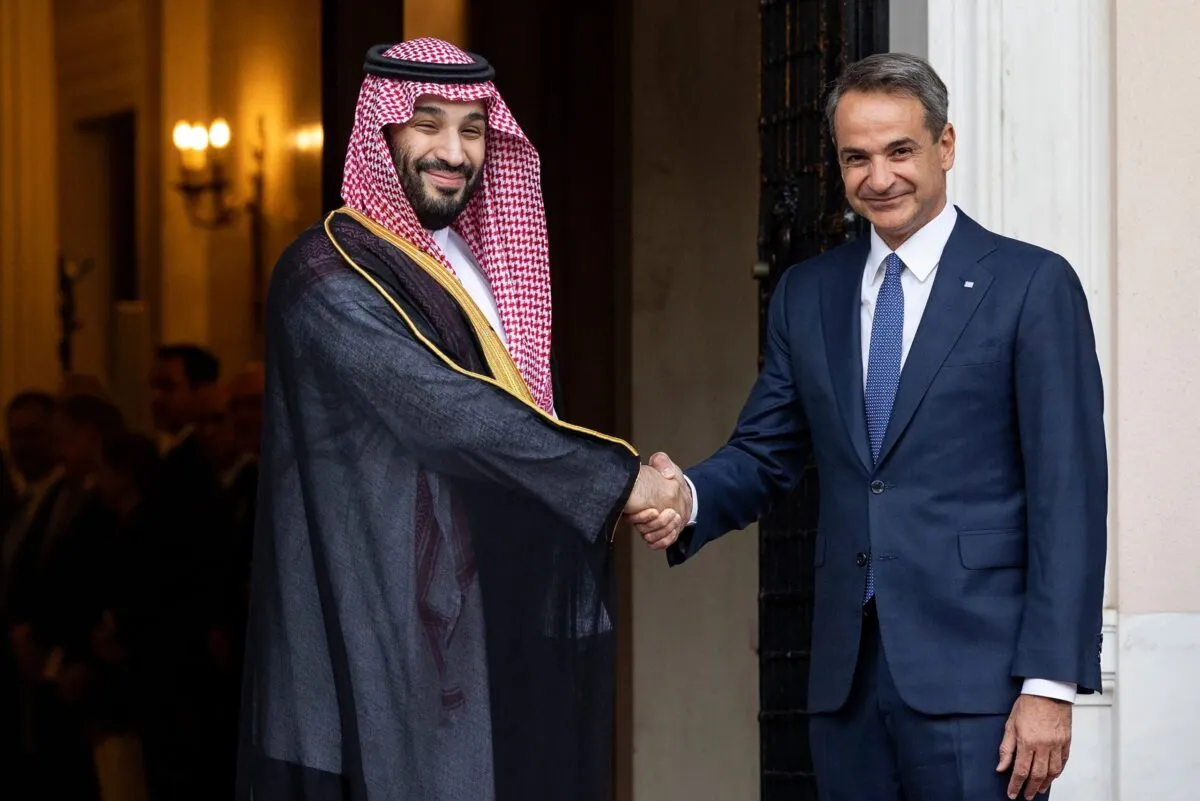 Macron, for instance, has been constantly talking with the Saudis regarding improved relations with Lebanon and its financial troubles. Also, France and Greece have strong relationships to Europe and inside the European Union with the message being heard loud and clear: 'Saudi Arabia is open for business."

Thus in terms of international relations the Saudi Crown Prince maybe getting his own way at last, and perhaps dictating the ground rules. After his meeting with Biden with was a report of a direct phone call between him and Russian president Vladimir Putin, no doubt about the state of the world oil markets and what to do next. With him also having excellent relations with the Chinese it would appear that Saudi Arabia has got it all made and MBS is building a world in his own image.