Terror in Mogadishu: When Will The Shabab be Stopped?

Published August 23rd, 2022 - 08:33 GMT
The Hayat Hotel in Mogadishu, Somalia, was damaged by a violent siege by armed gunmen. The death toll from the siege is at 21. (Photo by HASSAN ALI ELMI/AFP via Getty Images)

The latest attack on Mogadishu's Hayat Hotel by the Al Shabab militant group suggest Al Qaeda militants are remaining on the world stage. Despite the killing of their leader Ayman Al- Zawahiri in Afghanistan by US strikes, the deadly attack on the hotel point to the fact Islamic militants may continue to wreak havoc in states around the globe while extremism continues to be high on the agenda.

Despite the ongoing war against them by the Somali state, troops from the African Union and occasional American strikes against their bases, the Al Shabab student movement which control the south and central part of the country, and even in parts of the state capital, is proving to be a potent force and an ongoing violation.

Their 30-hour siege of the Hayat hotel in which at least 21 were shot dead and more than 106  needed to be hospitalized was the biggest deadliest attack for Somalia since 2017 when 500 people were killed in  a huge truck bombing in Mogadishu.  Blood and terror are being replayed again. This time, the attack on the hotel was just as fierce, daring and intense for its bold nature and show of force.

It looked as if it was in retaliation to the drone attack which killed 13 Al-Shabab members by the US Africa Command the previous week.

Tit-for-tat maybe, but judging from the reports coming out of Mogadishu, the Hayat operation was a big one and certainly will be remembered.  First, two car bombs went off outside the hotel and then Shabab militants went into the hotel and started to fire at anyone they saw in front of them according to eye-witness accounts. It was fearful and horrendous, for it is said the hotel is a frequently-visited hub for Somali politicians, ministers and civil servants who would go there to unwind, chitchat and rub shoulders. However, they were reports of women and children involved in the attack.

Latest video shows children under 10 years of age have been rescued from the hotel. Standoff continues at #Mogadishu’s Hayat Hotel between security forces and Al-Shabaab militants. #Somalia #HayatHotelAttack pic.twitter.com/xm7S2SHsi0

It was dramatic and deadly. After what amounted to be a terror raid into the hotel, Somali government forces intervened and thus begun a grueling 30-hour fight with the gun-running militants and it is not yet clear how many there were  and/or what happened to them. What can be said is there had been a major battle with the parts of the plush hotel destroyed. 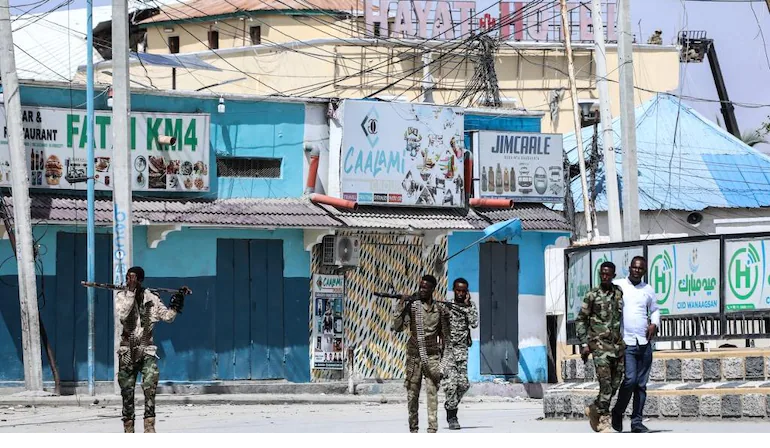 Security officers patrol near the site of explosions in Mogadishu on August 20, 2022 | AFP

This deadly incident shows that Al Shabab remain a formidable force against the new government and its new president Hassan Sheikh Mohamud who was elected in May and promised to deal with Al Shabab and end their presence in Somalia with the help of the African Union forces and the Americans.

It took Somali forces more than 30 hours to contain the fighters who had stormed Mogadishu's Hayat Hotel on Friday evening in an assault that started with loud explosions. https://t.co/dh4jFhrUKB

However, these Al-Qaeda-affiliated forces who approximately number 10,000 and established in 2006 have been fighting the Somali government for at least 10 years and are determined to establish an Islamic state based on narrow percepts and doctrine in Somalia in line with that confessed by Osama Bin Laden, the original founder of Al Qaeda who was killed by the Americans in Pakistan in 2010.  Besides, there are two main distinctive characteristics that distinguishes them. These apply to Al Shabab of Somalia and are labelled by Al Qaeda and Islamic State, or more appropriately ISIS and include the fact:

Massive blasts and sporadic gunshots inside Hayat Hotel in #Mogadishu where Al-shabab militants stormed the premises. There was a Standoff between security forces and Al-Shabaab Militants at Mogadishu’s Hayat Hotel .The US condemn the attack. #Somalia #HayatHotelAttack pic.twitter.com/mxOcN0Hfuh

They grow horizontally, through geographical spread like Al Qaeda and ISIS; and include they way they moved from Iraq, to Syria, Afghanistan, down to the Sinai Peninsula, to Tunisia, Libya, Yemen and Nigeria and have tended to recruit Islamist militants from the West, including European countries like France, Belgium, Britain and Germany. They maybe alienated individuals who are inspired by different calling.

The Shabab followed this model, a leader at the top and attracting operatives from abroad, Europeans to fight the so-called state heathens and kafers (non-believers). The Shabab have tended to build bridges with the militants of Nigeria, the Boko Haram movement, an Al Qaeda-affiliate which also wants to overthrow the state. Over the years, they wanted to prove their force by attacks beyond the borders of the country.

Kenya was a favorite. In 2016 it attacked a Kenyan military base inside Somalia were the militant outfit supposedly killed 180 soldiers, the Shabab attacked its Garissa University in 2015 and killed 148 students and at the Westgate shopping mall where militants raided the place and killed 67 people. These show the extent of the military arm of the Shabab's in East Africa and its linkages.

Whilst the Somali government is today trying to fight the organization through many means and not just military ones – it has, for instance, appointed a former Shabab deputy leader in the name of Muktar Robow who is now the country's Minister of Religion – the deteriorating socio-economic state of the country is not helping and may brew into the growth of the Shabab movement.

At least 3 AS fighters, armed with machine guns and grenades, are involved in the attack
according to Somalia Govt officers.

Somalia is already facing drought and is on the edge of famine. There are no rains. Already up to one million people have been displaced and left their farms, lands and crops in a country whose agriculture form 60 percent of the GDP and employs 80 percent of the population. With this situation it can widely be expected that support for the Shabab movement to continue unless innovative political developments and economic betterments are fostered.

Terror in Mogadishu: When Will The Shabab be Stopped?

Myth or Truth? How 'Rich' was Muammar Gaddafi’s Libya?