The Two Sultans of Oman: from Qaboos to Haitham bin Tariq

On Friday January 10th 2020, Oman’s Sultan Qaboos died after a long battle with cancer. He stood as the Middle East’s longest serving ruler, reigning the Sultanate for half a century. Within hours of his passing, Qaboos’ cousin and Oman’s former culture minister, Haitham bin Tariq was sworn in as the new Sultan of Oman.

The royal council did not engage in a three-day debate on who should be the new successor, as was expected. Instead, they accepted Qaboos’ choice, enclosed in a letter he’d left in a sealed envelope.

In a televised address, the envelope and its letter were revealed, no doubt to assuage fears of uncertainty both within the region and within Oman itself. “The videos coming out of Oman show the entire succession process from start to finish,” explains Washington Institute Fellow Elana DeLozier. “The message to [Omanis] and the world: we are organized, we are stable and coherent, our new leader has total legitimacy”.

video footage of Haitham’s coronation shows him looking nervously on, swallowing perhaps both anxiety and emotion as he is saluted by cannons and soldiers alike

Yet, as Sultan Haitham was crowned, was stability a given? It is impossible to know what was going through the 65-year old’s mind, but video footage of Haitham’s coronation shows him looking nervously on, swallowing perhaps both anxiety and emotion as he is saluted by cannons and soldiers alike.

With US-Iran tensions, domestic unemployment and a brush with the Arab Spring, there is much to be anxious about. Sultan Haitham bin Tariq must move quickly to assert his own legitimacy, and he will have to contend with Qaboos’ own legacy as the father of modern Oman.

After seizing power from his isolationist father, Sultan Said bin Taimur in July 1970, Qaboos addressed the nation for the first time. “I promise you to proceed forthwith in the process of creating a modern government. My first act will be the immediate abolition of unnecessary restrictions on your lives and activities.”

From 1970-75, Qaboos successfully quelled a rebellion known as the Dhofar War.

From 1970-75, Qaboos successfully quelled a rebellion known as the Dhofar War. A conflict funded by (external) communist forces and originally a response to Qaboos’ reactionary father, Qaboos responded by granting amnesty to all Dhofari rebels who promised to lay down their arms while also portraying the communist  Popular Front for the Liberation of Oman as un-Islamic and therefore without the religious legitimacy that he as Sultan carried.

It is worth mentioning that at 29 years of age, the inexperienced Qaboos received military advice from British contacts, especially Timothy Landon, a former Sandhurst classmate turned Brigadier who convinced Qaboos to overthrow his restrictive father. “Landon was the catalyst for the coup,” explains John Beasant, author of 'Oman: The True Drama and Intrigue of an Arab State.' “Landon’s single greatest achievement was being available to the Sultan at a time when Qaboos came to the throne yet had no experience of governance whatsoever.”

According to Guardian journalist Michael Barber, it was also Landon who advised Qaboos on ensuring not only military success but reaching out to ordinary Omanis through a hearts and minds campaign. Oman’s SAF or Sultan’s Armed Forces would battle insurgents while also running newly-erected hospitals and related public services. From a British-advised gendarmerie, the SAF became “an ambitious civic development programme financed by the country’s burgeoning oil revenues. By 1976, Dhofar was free of insurgents.”

It is worth mentioning that at 29 years of age, the inexperienced Qaboos received military advice from British contacts, especially Timothy Landon, a former Sandhurst classmate turned Brigadier

Qaboos also took to heart Landon’s promotion of Omanisation in civil and military sectors to ensure that Oman gained the political independence that it could, that Omanis could participate in the new government and, as Qaboos stated in his second national address, Omanis themselves help “us to build a thriving and happy future”.

From Warfare to Welfare

By the end of the Dhofar Rebellion, Qaboos’ use of oil wealth saw the construction of roads, hospitals, schools and a national healthcare system. His promise to modernise Oman had been delivered. “The effort was so successful,” observes New York Times journalist Ben Hubbard, “that in 2010 the United Nations ranked Oman first in the world in advancement up the Human Development Index over the previous 40 years, ahead of China.” Qaboos’ legacy was hence the creation of modern Oman and citizen welfare.

in 2010 the United Nations ranked Oman first in the world in advancement up the Human Development Index over the previous 40 years, ahead of China

Domestic accomplishment was followed by regional mediation. Qaboos maintained openness with Iran after the 1979 Revolution and with Western allies such as the UK and US. The most prominent accomplishment of such neutrality until recently was the Iran Nuclear Deal or Joint Comprehensive Plan of Action (JCPOA).

“Although the JCPOA was formalized in 2015, much of the groundwork was laid in the years prior,” explains geopolitical analyst Edwin Tran. “[Oman] was on good terms with Iran in the years following the Iran-Iraq War (1980-1989) [and] in 2009, Sultan Qaboos was the first foreign leader to visit Iranian President Ahmadinejad following his reelection victory.”

More controversially, Qaboos opened relations with Israel, hosting PM Netanyahu in a surprise visit in October 2018. There was speculation that such a move was intended to both continue Oman’s mediation role while showing GCC states that the dominant Saudi Arabia does not always have to lead.

“Saudis [are] not the only game in town,” says Akiva Eldar, senior columnist for Al Monitor. "Following the [Jamal] Khashoggi affair, several countries from the Arab Peace Initiative of 2002 have been allowed to take a small lead of the process. Mahmoud Abbas visited Oman recently and both parties [the Israelis and Palestinians] have now mentioned Oman as a potential facilitator of the peace process”.

In any event, the decision to host Netanyahu and Mahmoud Abbas showed Qaboos’ emphasis on exploring further avenues of mediation beyond Iran to ensure Oman’s relevance in the Middle East. 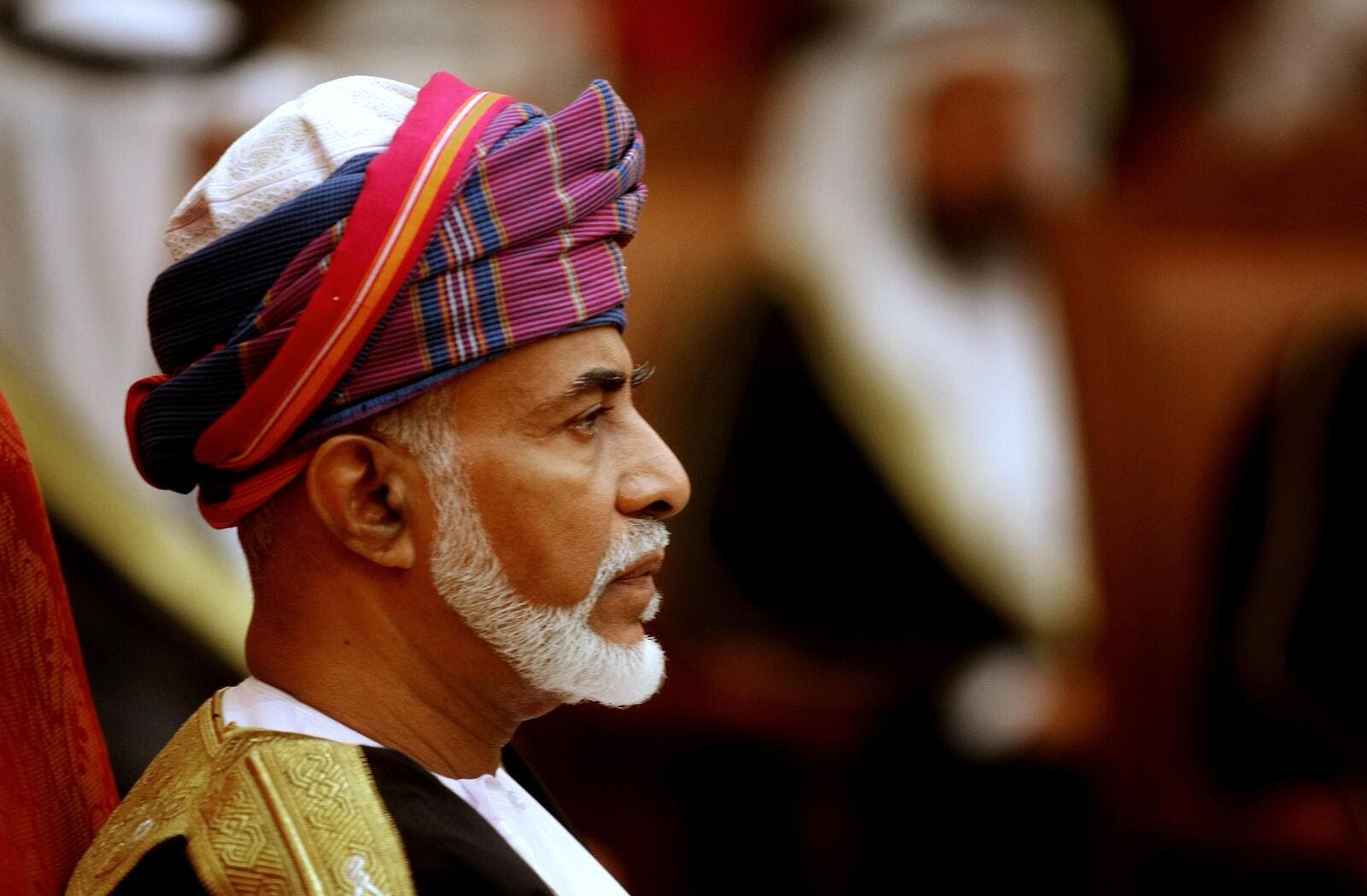 Presiding over a highly centralized absolute monarchy coexisted with a paternalism built upon ending civil war, modernising Oman, welfare and careful regional mediation. Such paternalism appeared to resonate with many Omanis, as evidenced by expressions of support once the monarch began cancer treatment abroad in 2015. Upon his return, there was public relief. “I haven’t felt this happy for a long time” tweeted one Omani.

“Welcome back baba [father] Qaboos, you have given your nation hope and courage.” Another Omani went further to declare that “[...][s]eeing [His Majesty] Qaboos […] makes me [want to] cry, you don’t even understand unless you’re Omani.” Lengthy absences did not result in coup attempts (though there were arrests of ‘coup plotters’ in 2005), even when in 2015 Qaboos disappeared to Germany for almost a year of medical treatment.

Oman’s Brush with the Arab Spring

However, Qaboos was not immune to the Arab Spring. In February 2011, protestors demanded employment and political reform. Qaboos responded by promising job creation and granting the Consultative Council of Oman greater powers. At the same time, he employed a carrot and stick method to deal with discontent, arresting protestors in 2011 and social media activists in 2012 only to grant pardons to some of them in 2013.

The Death of Baba Qaboos

Despite being ruffled by more recent unrest, it would appear that Qaboos left a legacy of popular paternalism. His funeral procession saw ordinary Omanis line the streets of Muscat and cry for their father.

Twitter became a hub for Oman’s grief. “Goodbye Baba Qaboos, we will miss you so much,” tweeted one user. Another: “Rest well Baba Qaboos – you will forever be our Sultan”. The latter expression may present a problem for the newly-crowned Sultan Haitham.

In his first speech, Sultan Haitham focussed on continuing Qaboos’ foreign policy. “We will remain guided by the late Sultan’s wisdom and will preserve and embark on the achievements he made. With respect to international relations, we will follow the same course and embrace foreign policies based on peaceful co-existence.”

While it is still too early to ascertain Haitham’s ruling style or long-term acceptance, it is clear that he is drawing on Qaboos’ legitimacy at this stage to begin his own reign. The fact that he was chosen by Qaboos and wishes to maintain his predecessor’s foreign policies illustrates an emphasis on continuity and stability rather than change. Significant too is the support of royal and military factions.

As Haitham gave his first national address, he was flanked by military officers, symbolising the security pillar that can pre-empt or launch a coup if disgruntled. More significantly, Haitham received pledges of loyalty post-speech from key Omani figures, including Sayyid Assad bin Tariq, Qaboos’ cousin and long-speculated to have been the chosen successor.

Haitham received pledges of loyalty post-speech from key Omani figures, including Sayyid Assad bin Tariq, Qaboos’ cousin and long-speculated to have been the chosen successor.

Such signs of loyalty present a united bloc to the region and the world, emphasising smooth continuity and Oman’s ability to maintain a coherent and neutral foreign policy.

With Haitham’s previous experiences and regional ties through various diplomatic posts, the start of his reign will be different from that of Qaboos’. He is not young and inexperienced and hence not reliant on external advice from another Landon. There is no civil war. In addition, Haitham has children and can therefore establish direct lineage to provide even more certainty of continuous rule.

However, Haitham’s inaugural address did not cover domestic issues. He inherits an Oman with limited hydrocarbons amid fears of an oil slump and employment concerns that will require long term Omanisation of various sectors. Qaboos made Oman the region’s mediator but it is domestic prosperity that must take precedent to prevent the Arab Spring from returning.