Published May 12th, 2022 - 11:57 GMT
Three Ukrainian policemen stand at an explosion site past a destroyed school by shelling in Novomykolaivka, eastern Ukraine, on May 11, 2022, amid the Russian invasion of Ukraine. (Photo by Yasuyoshi CHIBA / AFP)

The current war in Ukraine has two faces in the northern and northeastern parts of the country. Since the end of April, the Ukrainian Army (UA) has been able to capture localities in the north and northeast of the city of Kharkiv, which is home to over a million people.

The Ukrainians made the biggest territorial gains on the shore of the Pechenihy reservoir, where they were able to push Verkhnii Saltiv, Rubiszne and Bayrak close to the border of the Russian Federation. To the north of Khakiv, the UA is facing Lypzi. These territorial gains are of great strategic importance for Ukraine, as they largely remove the city Kharkiv from the radius of Russian artillery.

The situation is different in the Dombass. There, Ukraine is defending itself and trying to avoid encirclement by the Russian army. The Russian plan apparently calls for two pincer attacks of different widths: The outer pincer starts from Izyum, where Moscow has massed up to 25 BTGs (tactical battalion battle groups) with about 20,000 troops and about 500 tanks. From there, the Russians are advancing westward, where they were able to capture Velyka Komyshuvkh on May 10.

From Izyum, the Russian army is also trying to reach Barvikove in the southern direction. If the Russian army succeeds in breaking through in the Donetsk area, the pincer could encircle Slovyansk and Kramatorsk.

An internal, smaller pincer attack is being carried out by the Russian army at Rubizhe (from the north) and Popasna (from the south). The goal is to capture Lychansk and Severodonesk, whose outskirts the Russian army has already reached.

Contrary to most Western assessments, it should be noted that although the Russian army has been advancing slowly since the beginning of the Dombass offensive, it has managed to capture several localities. In places like Dibrovny, Tyhotske, Shandryholove or Rubizhne and Novobakmutivka, the Russians have already captured parts of the localities.

These places - like Popasna, which was taken on May 7 - had been on the front line for years and had been turned into fortresses by the Ukrainian army for several years. Thus, it is also understandable that the Russian army is not looking for a quick success, but is shooting positions and localities ready for storming. The Ukrainian defenders, on the other hand, hold off the Russian army as long as possible and so far try to withdraw in time before a final encirclement - as in Kreminna or Velyka Komyshuvkh. 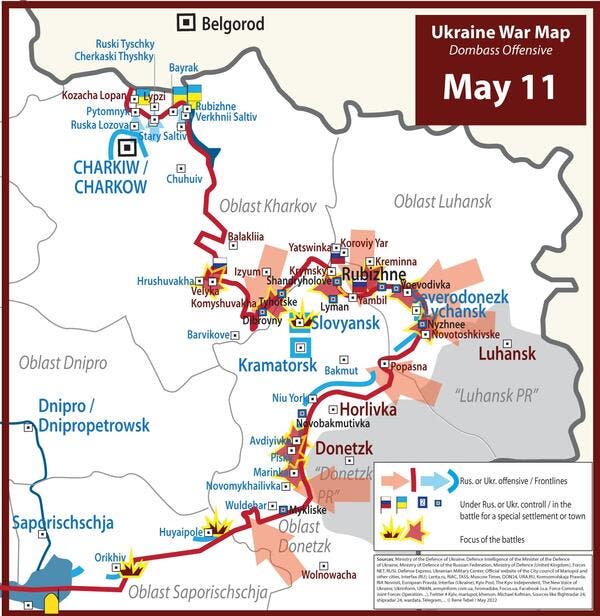