Why Is Morocco Arresting its Teenagers? 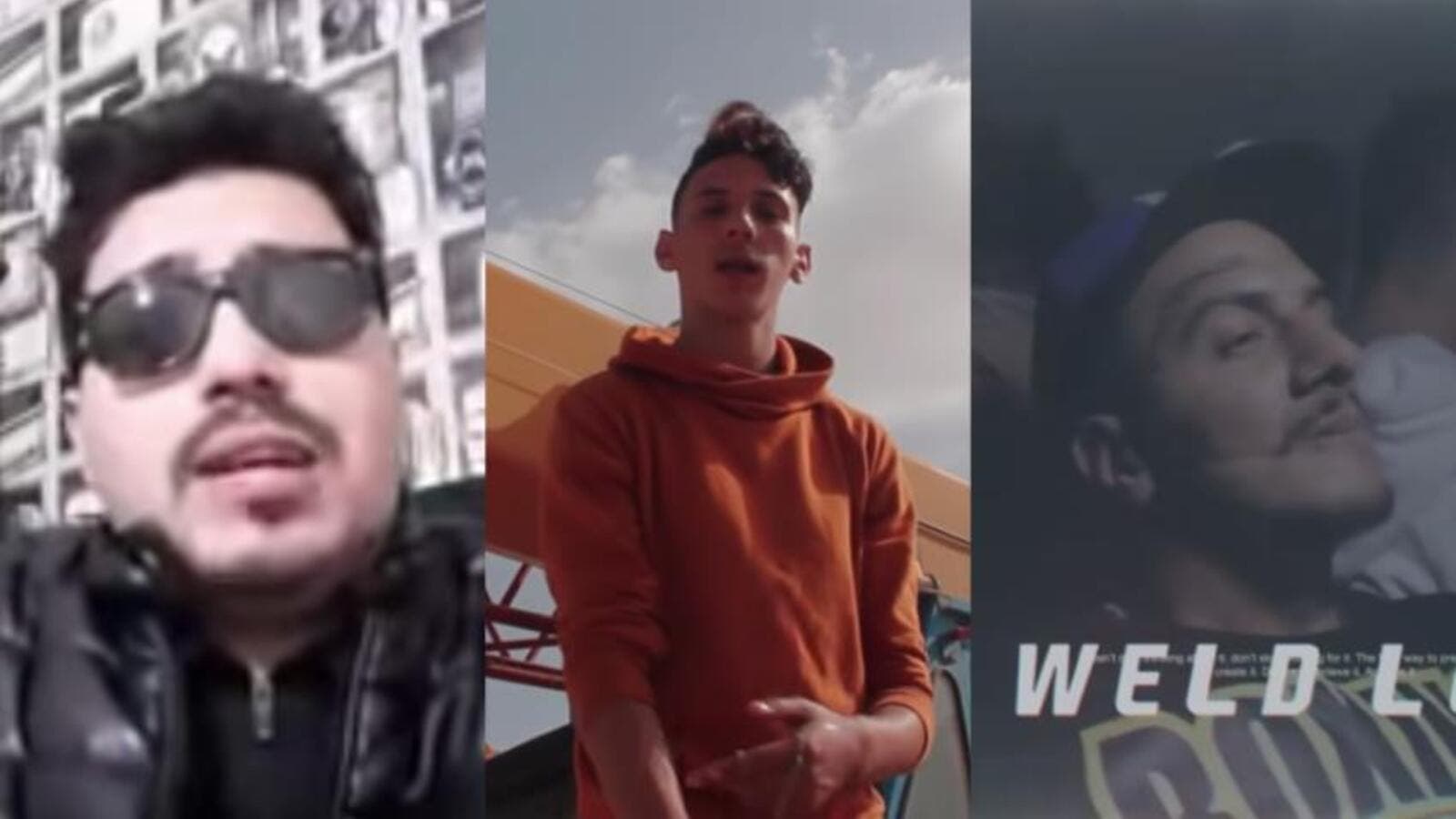 Moroccan YouTubers have been arrested after criticising the King [YouTube]
Highlights
Comment: A wave of repression has rained down on Moroccans who criticise King Mohamed VI on social media, writes Omar Brousky.

They are not political figures, professional journalists or activists, but mostly just ordinary Moroccans: young secondary school students, aspiring singers, shopkeepers or the unemployed. All are young, some in their teens.

What they have in common is that they generally express, via YouTube, the despair of Moroccan youth and often the widening gap between rich and poor; but they have also criticised King Mohamed VI and for the first time made fun of his speeches "which have become useless and are no longer a hit with anybody".

Indeed, up until now those who criticised the King were often Moroccan expatriates, out of reach of a law which punishes criticism of the monarchy. We have reached a real tipping point in the mode of political criticism.

'My life has no goal'

It all began on 29 October 2019 with a song posted on YouTube. Three young rappers appeared to denounce in coarse language the corruption and social inequalities, and clearly pointing the finger at King Mohamed VI:

"Who crushed the country and still wants to get richer? […] Who got us into this mess? You've violated our dignity […]. If there are 40 million of us in this country, 30 million stay with you because they have no choice […]. My life has no goal […] I'm the guy who trusted you and was betrayed […]. I'm the Rifain who dreams of a better Rif…"

At the time of writing, the song had 22 million views on YouTube (in the last parliamentary election only 13 million Moroccans voted…). Who wrote it? Three young rappers from the working-class quarters of Casablanca, nicknamed Lzaar, Weld Legriya and Lgnaw.

The title of their song is a popular slogan among rebellious youth: "Aacha chaab" ("Long live the people") a subversive variant on "long live the king". Immediately, the justice machine swung into action. One of the singers, Mohamed Mounir (L'Gnawi) was arrested and sentenced to a year in jail on 24 November 2019. The indictment makes no mention of any political motive: the rapper was convicted of "contempt of the police".

A few days later, there was a veritable avalanche of arrests and convictions targeting young Moroccans, most of them unknown.

On 15 December, an 18-year-old was given three years in jail for having shared the song on his Facebook page. This time, the indictment was clearly political: the young student was convicted of "expressing views offensive to the King".

The public outcry caused by this case was such that the court decided to grant the teenager interim release, but the prosecution has not been dropped and his trial set for the end of March.

On 26 December, Mohammed Sekkaki, nicknamed "Moul Kaskitaé" (the man with a cap), an unemployed worker in Settat, a poor city located between Casablanca and Marrakesh, was arrested and charged with "contempt of the state". Here too, the political motive was undisclosed: in fact, he had posted a video in which he made fun of the King:

"Those speeches you make with a tremor in your voice don't get us worked up anymore […] When you get sick, you don’t get treatment in your own country, in our hospitals, you go abroad to get well. You say "my dear people" when your people are suffering horrors on account of the inequalities and injustices…"

He got four years in jail.

On 26 December, because of a tweet posted in April 2019 criticising the judge who presided over the trial of the Rif Hirak movement, journalist Omar Radi was detained in Casablanca prison for "contempt of court". In this case too, because of the popular protest, the judge ruled on 31 December in favour of provisional release but the charges were not dropped.

On 1 January, 17-year-old Hamza Asbaar got a four-year sentence for posting his song "We understand" on YouTube, in which he openly attacks the King and his speeches which "we never understood".

"We never stopped listening to his speeches which we never understood […] The Constitution is tailor-made for him […]. You understood, we understood."

On 16 January, the court at Lâayoun, in Western Sahara, reduced the sentence from four years to eight months, so he is still in jail.

These crackdowns - and there's a long list of them - on young YouTubers living in Morocco who have openly criticised the King and his policies clearly constitute an effort to stifle freedom of speech and, in the words of someone close to the Palace, "to restore the hiba (a mixture of fear and charisma) attached to the monarchy and the State", as embodied by an increasingly unpopular monarch.

For years, Mohamed VI built his political outreach on his image and his actions: He was a popular young King who went out to meet his subjects: the media published pictures of him inaugurating local projects or handing out gifts in kind (sometimes schoolbags or baskets of oil and flour) to people chosen by agents of the Ministry of Interior Affairs in certain towns or villages, generally just before Ramadan.

Mohamed VI's growing unpopularity can be measured on social networks
He also appears on the official TV channels (Al-Oula, 2M, MedilTV… where the journalists look less like news anchors than like minor officials from the civil registry) where the monarchy is presented as the only institution "which functions, which is active," the only one which is worthwhile.

Compared with the King who is also described as "the only trustworthy player," the government, the parties or even Pparliament are seen as mediocrity, opportunism, and inefficiency personified - which is not completely untrue. In an old Orientalist cliché, he is often seen as the good caliph surrounded by evil viziers: "Lmalik zouine, lidayrine bih li khaybine" (the King is good, the baddies are those around him).

The King's speeches are no longer a hit

Today these strategies have run out of steam and the popularity of Mohamed VI is on the wane. After 20 years of absolute rule, the King's image has been spoiled by the extent of the social problems which many Moroccans must cope with every day.

The development 'projects' promised time and again in the monarch's speeches, those supposedly 'key' projects and promises of reform seem only to have benefited a few lucky ones, as the King himself has admitted. Not to mention the reform of the education system, the battle against corruption, the poverty and social injustices which have reached dangerous proportions for the stability of the regime itself.

Omar Radi's arrest took place only a few days after the King had appointed a 'commission for development' chaired by the ambassador to Paris, Chakib Benmoussa. One of its members, Rachid Benzine, though an academic close to the Palace, posted an indignant tweet:

"The imprisonment of Omar Radi calls on us to reflect and reminds us that no model of development is defensible or viable unless freedom of expression and information are guaranteed. Without criticism and discussion of ideas, development is meaningless."

Whatever its actual extent (opinion polls concerning the monarchy are against the law in Morocco), Mohamed VI's growing unpopularity can be measured on social networks where thousands of Moroccans can express themselves with relative impunity. The fact, for example, that Aacha chaab has been heard by around 22 million Moroccans and received positive commentaries from millions of users speaks volumes about the ruined popularity of the 'poor people's king'.

In addition, young people's criticisms and mockeries no longer spare the King, whose speeches are targeted, and with good reason: He has absolute power, complete control. Moroccans know this. Which is why, at the outset of his reign, his words raised great expectations, and why they now cause such disappointment.

In order to stifle those voices that surface spontaneously, criticising the King outside of social networks, the monarchy relies on a police force which harks back to the Tunisian regime as it was under Zine el-Abidine Ben Ali, with its judges who were anything but independent.

Read more: How humiliation is fuelling the Arab street

Since the shutdown, just 10 years ago, of Journal Hebdomadaire - a beacon of the Moroccan independent press from 1997 to 2010 - economic pressures and legal threats are continually brought to bear on what is left of the private media. On this plane as well, the role of the justice system, utterly in the grip of the Palace and the royal entourage, is absolutely crucial.

As the repression spreads, Moroccan justice has been blacklisted by the NGOs (both Moroccan and international) and described as the secular arm of the King and his milieu.

Not only does the monarch appoint the magistrates, but their verdicts are handed down in his name. He also chairs the Supreme Council of magistry.

In the political trials that are still being held in Meknes, Lâayoun or Casablanca, he is implicitly judge and jury as human rights defenders bitterly complain, tirelessly calling for a true separation of powers.

Omar Brousky is a journalist and professor of political science in Morocco.
This article has been adapted from its original source.