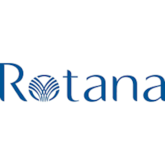 Rotana was founded in 1992, by a partnership between two visionary thinkers, Nasser Al Nowais and Selim El Zyr, who were joined three years later by Nael Hashweh and Imad Elias.

Operating as Rotana, it opened its first property in Abu Dhabi in 1993 and is today one of the leading hotel management companies within the Middle East and North Africa.

Rotana is a company offering the best of both worlds. A unique understanding of the culture and communities of the Middle East combined with the collective expertise of an executive team contributing over 35 years of international experience in the service industry.

Rotana aggressive expansion plans have seen the company grow from 2 properties in 1993 to a total of 70 by 2014. With several further properties planned for opening and new projects in the pipeline confirming the company's intention to have a Rotana managed property in all the major cities throughout the Middle East and North Africa within the next five years.

Rotana, one of the leading hotel management companies in the region with over 100 properties across the Middle East, Africa, Eastern Europe and Türkiye, has announced the soft opening of its first 5-star hotel in Dammam under the distinguished “Rayhaan by Rotana” brand. Dana Rayhaan by Rotana, designed for discerning business and leisure travellers is in a prime location in the heart of the bustling city, offering a striking modern design, exceptional amenities and stunning views of the Arabian Gulf and Al-Ashriah Roundabout. The hotel provides flawless guest services in ...
Read more

The New 'Sunny Side up' Breakfast Deal at Café 302