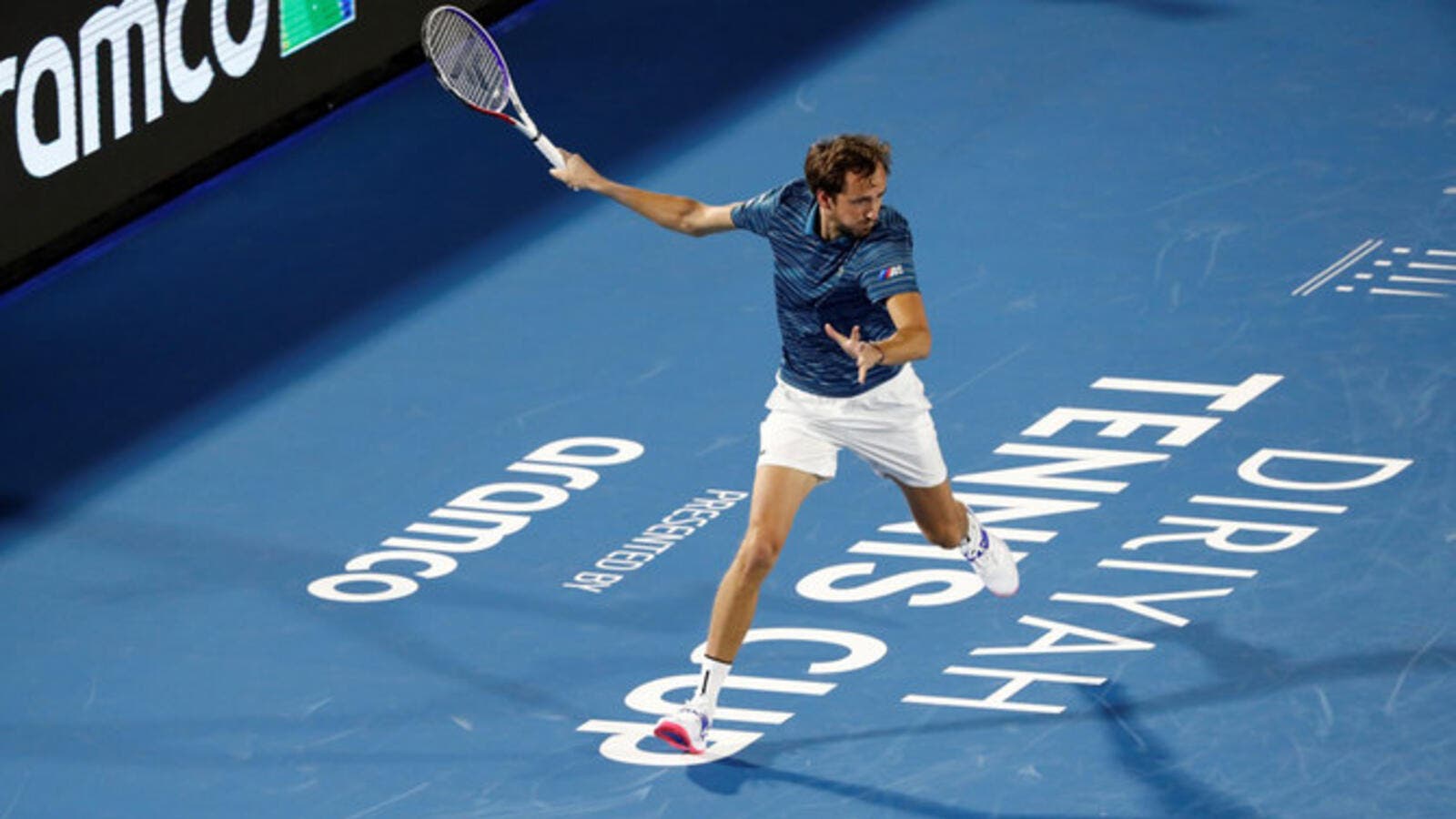 Daniil Medvedev in action on day one of the Diriyah Tennis Cup. (Supplied)

A new chapter was written today in Saudi Arabia’s sporting history as the first international tennis matches took place as part of the epic month of Diriyah Season.

The Diriyah Tennis Cup presented by Saudi ARAMCO will certainly go down in history as eight of the world’s best tennis stars met in the Diriyah Arena for the first-ever international tournament played in the Kingdom.

The event also goes down in tennis history as not only the first in Saudi Arabia, but also one of the first to use Hawk-Eye Live technology. Replacing the need for line judges and providing more accuracy, Hawk-Eye Live sends visual and audio cues to the chair umpire and off-court monitors within a tenth of a second of a ball bouncing, to show faults and out of bounds shots without relying on the naked eye.

The first day as part of a three-day tournament saw all eight players in action in the opening matches. First up on court was Italian and world number 12 Fabio Fognini taking on American John Isner world number 19 and holder of the third fastest serve of all time in Men’s Tennis. Although both players will be written into the Kingdom’s history books, it was Fognini who was the record breaker as he delivered the first international serve and match win ever recorded, 7-6 6-4.

Speaking after his win, Fabio Fognini said: “I won the first game of the competition, it’s nice. It’s something I will remember for sure and the people will remember as it is the first year we play here. I know they want to do something more [grassroots tennis], especially to improve tennis in this country so I’m happy.”

Commenting after the historic match, John Isner also added: “Very unique to be here and be part of this. I never thought I’d be here playing in Saudi Arabia. Very grateful and happy to be here. The ball kids did great tonight, fantastic job.”

“So far it’s great. The offering they have here for us to perform is incredible. The court is one of the best…it’s quite nice. The people are very nice. I feel very good.” said Monfils.

Daniil Medvedev of Russia and Jan-Lennard Struff of Germany met in the third match of the evening. Medvedev made light work of Struff to take the win 6-3 6-1 and advance to the semi-finals.

Speaking after his win, Medvedev commented: “Was a great match. It’s never easy like this, after the end of the season, holidays and in the middle of pre-season to know how you are playing at this moment – are you strong or not? Today was a great match, beating Jan so easy is a great achievement because he’s a great player so I am really happy. The atmosphere was also really good and warm.”

After the match, Goffin commented: “Super organisation - the stadium is very nice. First time for me playing in Saudi, it’s a great atmosphere. I think for the people tonight it was something to see, professional tennis matches here. I think it was great for us and them as well. It’s a nice court and stadium – it could be a very nice center court in a big tournament.”

Today’s results will see Fognini of Italy meet Monfils of France in semi-final 1 and Medvedev of Russia will take on Goffin of Belgium on Friday 13th December. The remaining four players will still continue to play as part of the Consolation Bracket. The Diriyah Tennis Cup will conclude with the final on Saturday 14th December. The Diriyah Concert Stage will also welcome Calvin Harris and Major Lazor on Friday 13th December and Swedish House Mafia on Saturday 14th December.