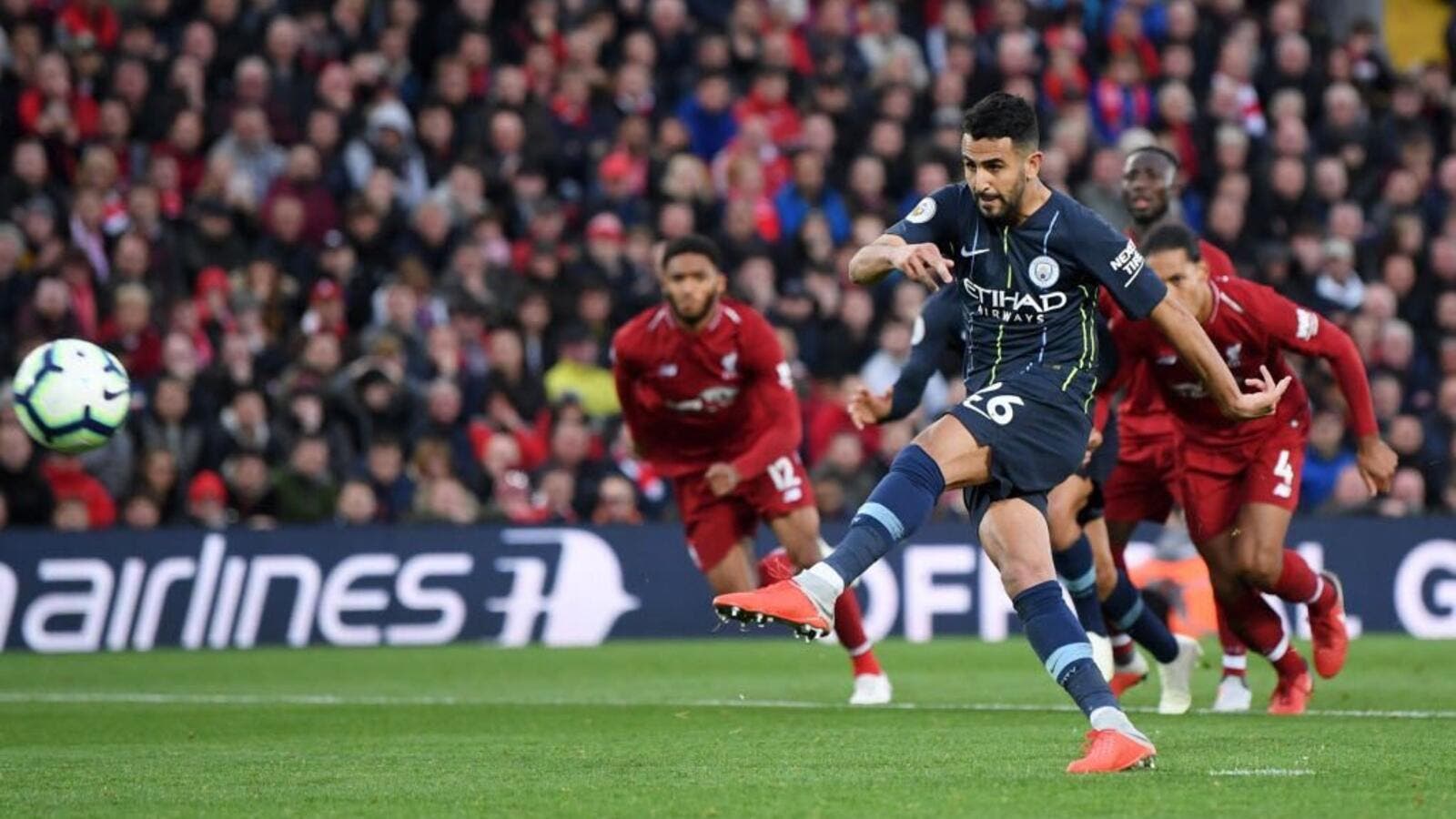 Riyad Mahrez missed a late penalty as Liverpool and Manchester City played out a tense 0-0 draw that saw the Premier League champions move top of the table on goal difference.

A match billed as a clash between the two title favourites failed to live up to lofty expectations with both teams struggling to create clear chances at Anfield on Sunday.

But Mahrez should have won it for City with four minutes to go after Virgil van Dijk was penalised for bringing down Leroy Sane, instead blasting his spot-kick well over the crossbar.

With two unbeaten league records on the line a close match was always likely, City appearing wary of Liverpool's threat having already lost three times to Jurgen Klopp's side in 2018.

And, despite Mahrez's miss, a point apiece was a fair result as both teams cancelled each other out, the draw leaving Liverpool in third, below Chelsea, with all three on 20 points.

Mohamed Salah fired an early shot wide before Dejan Lovren was arguably fortunate not to concede a spot-kick when he bumped Sergio Aguero over in the penalty area.

James Milner had to be replaced due to injury and Liverpool were sloppy thereafter, although City lacked cohesion and the first half ended without a shot on target from either side.

A wild Fernandinho strike from 35 yards that flew well off target summed up City's frustrations, with a low-key Aguero booked for a poor challenge on Jordan Henderson.

Mahrez should have hit the target on the hour-mark, but pulled his effort wide of the post, then Salah shot straight at Ederson as the game finally opened up in the second half.

Alisson denied Mahrez with a smart stop at his near post in the 75th minute, but the best chance of the game was still to come.

Referee Martin Atkinson pointed to the spot when Van Dijk brought down substitute Sane, Mahrez smashing his kick over the crossbar to leave the game deadlocked.

What does it mean: Great result for Chelsea

Pre-match talk that a positive result for City or Liverpool would make them favourites to win the title now looks premature, with Chelsea the big winners of the weekend having thumped Southampton earlier in the day. Maurizio Sarri's side have perhaps been underestimated, but they - like both City and Liverpool - have 20 points on the board after eight games. Arsenal, with six straight wins in the Premier League, cannot be counted out of contention either. After last season's procession for City, 2018-19 should be more competitive.

With Pep Guardiola selecting David Silva and Bernardo Silva in a central midfield three, Fernandinho needed to be at his best to keep out Liverpool's star-studded front line. And, although the Brazil international was unable to get City on the front foot with his underrated range of passing, he was never out of position with his defensive instincts helping to restrict Liverpool's chances.

Star forwards for either side were on muted form at Anfield, with Aguero's run of City appearances without scoring at Liverpool's home stretching to eight matches, while Salah's under-par start to the season continued. Aguero collected a petulant booking for a bad tackle on Henderson and Salah wasted one of the only clear sights of goal, cutting on to his left but picking out Ederson. But it was Mahrez who was most wasteful, clearing the crossbar from 12 yards to cost City their first Anfield win in the Premier League since 2003.