Published November 2nd, 2020 - 07:30 GMT
Huawei, the multinational technological giant, announced that its brand new Mate40 series will have a built-in cryptocurrency wallet for the new Chinese central bank coin known as the digital Yuan. (Shutterstock)
Highlights
Here are the market highlights for the week. 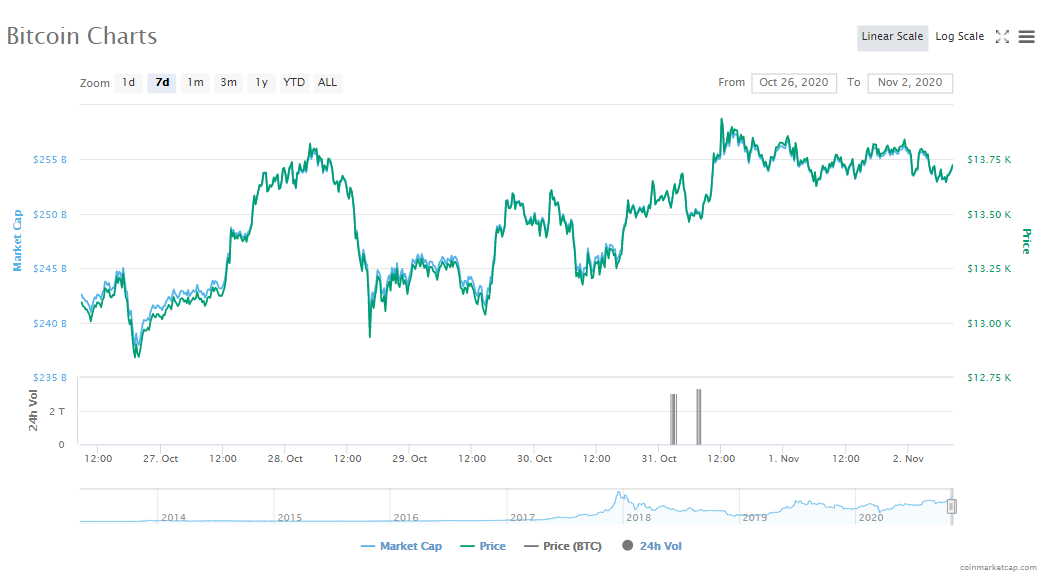 Without any further delay, let’s take a look at the major highlights of last week in the amazing world of crypto:

On a Twitter thread on Sunday, Former IMF Chief and President of the European Central Bank invited people to comment on the new European CBDC:

It’s already been one year since I took up my role as President of the @ecb. It has been a difficult year for Europe and the world, but together we have achieved some important milestones that I believe are worth reflecting on. pic.twitter.com/b5mVA7t0xN

Lagarde commented in a video: “We’ve started exploring the possibility of launching a digital euro. As Europeans are increasingly turning to digital in the ways they spend, save, and invest, we should be prepared to issue a digital euro if needed. I’m also keen to hear your views on it.”

The thread also included a survey link that the president invited people to take part in to express their opinions about the digital eurozone coin.

On Oct. 31, 2008,  Satoshi Nakamoto published the white paper on the coin that revolutionized the whole financial system.

In this white paper, Nakamoto proposed a solution to ‘the double-spending problem using a peer-to-peer network’.

The birth of Bitcoin was a reaction to the 2008 financial crisis that wrecked the whole world and exposed the faults of the current financial systems and introduced a solution to this catastrophic chaos. As we’re heading towards a new financial crisis, what do you think this will mean for the main cryptocurrency?

Huawei, the multinational technological giant, announced that its brand new Mate40 series will have a built-in cryptocurrency wallet for the new Chinese central bank coin known as the digital Yuan.

According to a post published on the Chinese microblogging website Weibo, the tech giant announced that the users of the new phones will get to enjoy ‘hardware-level security, controllable anonymous protection, and dual offline transactions, bringing a new safe and convenient payment experience’.

As Albawaba Business reported earlier this year, China is already resting the digital Yuan which will be the first CBDC in the whole world.

Toyota to launch a digital token with crypto exchange

According to an official announcement, the IT arm of Toyota Motors, Toyota System, has teamed up with the Japanese crypto exchange, DeCurret, to develop a digital currency.

Toyota has been interested in exploring the crypto market for a while now, as it has launched its own blockchain lab to examine all the potential use cases for the technology in the auto industry as Cointelegraph reported.

Audius, a music streaming and sharing platform that is powered by blockchain, has announced the airdrop of 50 million AUDIO tokens.

While the $AUDIOdrop was a historic milestone to honor our early adopters, ongoing $AUDIO reward mechanisms will be developed closely with the community.

Join the exclusive Discord channel for $AUDIO-hodlers via your Audius dashboard to take part in the conversation.

You can claim your tokens through your personal dashboard.

Bitcoin Back at $13K As PayPal Embraces Cryptocurrencies

Market is Back in Green As Dorsey Invests $50 Million in Bitcoin
Tags:HuaweiMate 40BitcoinChina