Published May 17th, 2021 - 08:00 GMT
Tesla’s CEO Elon Musk announced on Twitter the halt of accepting Bitcoin payments to buy EV citing ‘environmental’ concerns of the mining of Bitcoin impact on climate change efforts. (Shutterstock)
Highlights
Can't understand price charts📈? You know the drill... We've got you covered💃! Here is a brief recap of all major Bitcoin and cryptocurrency news events of the past week.

One of the wildest stories in the crypto world this week involves Tesla's CEO or we might also call him the Crypto puppet master Elon Musk who has almost crashed the entire market with another wild tweeting spree. 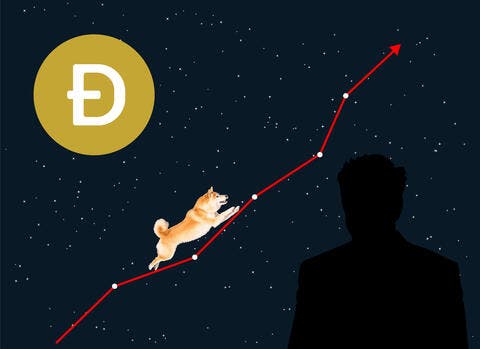 This time the Technoking of Tesla giveth and taketh away bitcoin payment citing energy consumption concerns. Truth be told, Musk has been EVERYTHING but predictable, but this time he outdid himself!

Subsequently, BTC witnessed a huge selloff losing almost 26.39 percent trading as low as around $43,632, a level that was last seen on the 28th of Feb. After Musk's U-turn, bitcoin traders began looking for greener options leading to a surge in price for the Proof-of-Stake and Proof of Storage coins that have a much smaller carbon footprint than bitcoin, such as ADA, XLM, NANO. But, DOGECOIN is still making gains soaring 8.32% last week.

Later on, founder of TRON Justin Sun, suggested that Musk must create his own coin 😂

.@elonmusk you should have your own coin.

If you feel a bit confused this week, rest assured you’re not alone. The Crypto puppet master really kept many traders breathless.

Ready? Let's talk crypto, NFTs, and charts 📈, shall we? 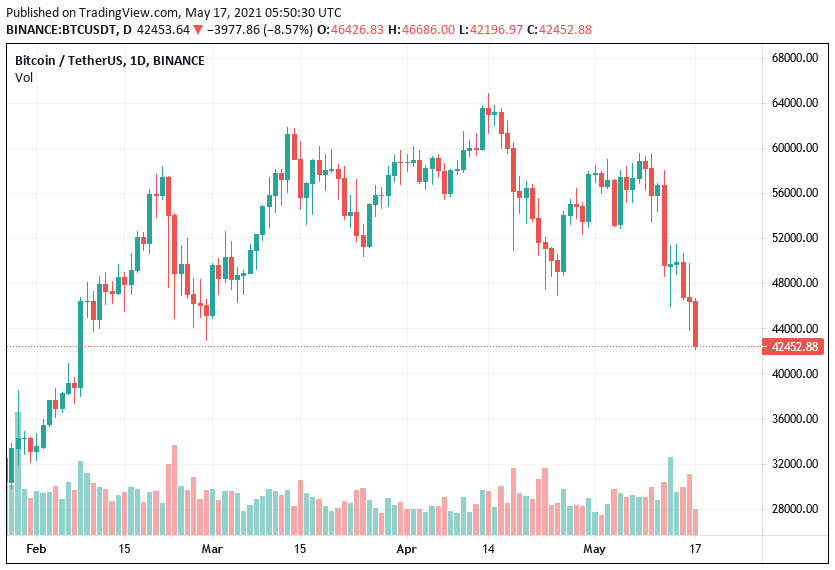 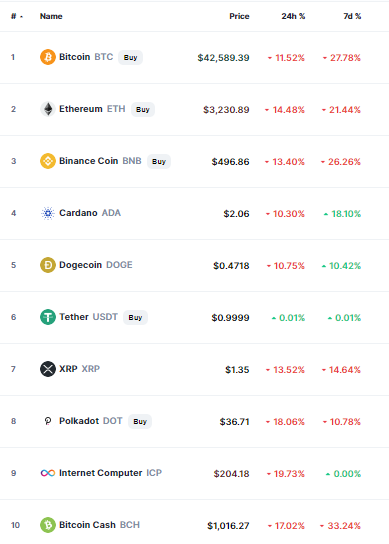 The zero-emissions EV company-issued statement reads: “We are concerned about the rapidly increasing use of fossil fuels for Bitcoin mining and transactions, especially coal, which has the worst emissions of any fuel”.

However, Bitcoin enthusiasts insists that Musk is very ill-informed when it comes to the cryptocurrency's carbon footprint and environmental impact of bitcoin’s mining as some argued that 75% of miners use renewable energy. Also, some market analysts regarded the move as an attempt by Musk to manipulate the markets. Furthermore, in what may throw crypto-investors into a bigger frenzy, Musk said that Tesla is currently looking into accepting other currencies that don’t use this much energy. What puzzles me the most is that he previously asked followers if Tesla should accept Dogecoin; which also relies on a similar energy-intensive proof of work consensus mechanism as bitcoin that he literally just criticized! The Poll saw more than 4 million responses (78% voted yes).

Do you want Tesla to accept Doge?

Later on, Musk tweeted saying that he’s working with Doge developers, so maybe he wants to tackle the energy consumption problem of Doge, who knows what Musk might be thinking! As far as we’re concerned this whole thing might be a joke 👀.

If you’ve been fortunate enough to do well this year, consider joining me and @VitalikButerin by donating at the addresses below.

But if all you have is Twitter, help spread the word. For every RT, I’ll donate another $50 to fight COVID in India, up to $100k. #cryptovscovid https://t.co/eKlOlccelv

It's worth mentioning that this amount of Shiba Inu (SHIB), Akita Inu (AKITA), and Dogelon Mars (ELON) — created based around the Japanese Shiba Inu breed of dog —  was given to Vitalik for free as the developers of their coins decided to share half of their tokens to his publicly known Ethereum address.

To donate them, Buterin sold these massive amounts of tokens, causing a huge liquidation sending the price of these assets into free fall, after that he transferred the proceeds of these sales to a range of charities. As of the time of writing this article, Shiba Inu is down 30%, Akita Inu is down 50% and Dogelon Mars is down 73% over the past twenty-four hours.

Disclaimer: The Cryptocurrency market is considered highly speculative, risky, and largely unregulated. Anyone mulling investing in it, should be aware there's a risk of losing their entire investment