How Are MENA Countries Gearing Up for the Potential Food Crisis?

Published April 5th, 2022 - 06:00 GMT
The Russian invasion of Ukraine has alerted the world for the danger of a potential food crisis worldwide. (Shutterstocl - Albawaba)

It is no secret that the ongoing fight in Ukraine continues to threaten the globe with an unprecedented food crisis, as both Ukraine and Russia are among the world's biggest suppliers of essential agricultural items.

When the Russian invasion of Ukraine started on the 24th of February, countries around the world started bracing for major changes in the global order, particularly as both countries involved in the conflict contribute to a major chunk of the world's food needs. Ukraine is the world's fifth-leading producer of wheat, out of which 45% are assigned to international exports.

As a result of the intensifying war in Ukraine, its government had announced a ban on key agricultural exports in the early weeks of March 2022, one that includes wheat, corn, corn oil, meat, poultry, eggs, oats, sugar, and salt. The decision coupled with growing concerns worldwide caused a spike in wheat prices that reached their highest records in 14 years.

Russia, which is providing the world with 11% of its wheat needs, has also imposed restrictions on international exports of essential items, including wheat, barley, and oats.

Consequently, Middle Eastern and North African countries are set to experience some of the biggest challenges in terms of food security, not only because their agricultural production can not meet the region's needs, but also because most countries in the region do rely on imports from Ukraine and Russia for some of the most basic and necessary items.

About 50% of Ukrainian wheat was reportedly exported to the MENA region during 2020. 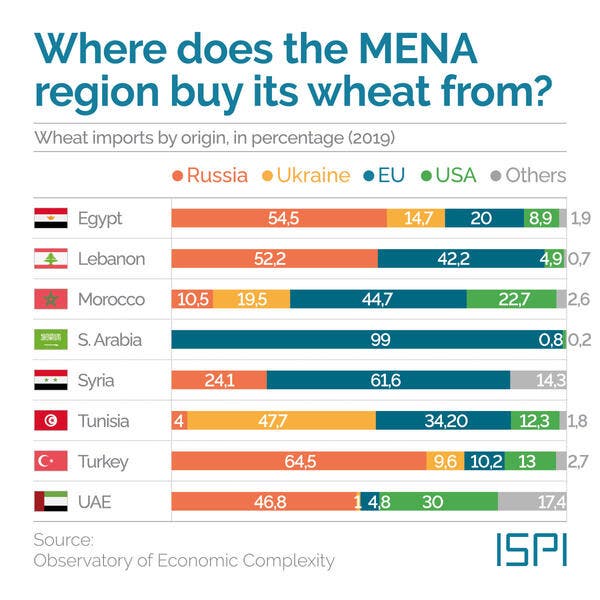 According to estimates, 40% of Ukraine's wheat exports land in countries in the Middle East and North Africa, making countries like Lebanon (80%), Egypt, Libya (40%), Yemen (27%), and others rely heavily on Ukrainian supply.

In response to the potential food crisis that could amount to a region-wide famine, governments in the Middle East and North Africa have started taking urgent measures in the hopes they can help alleviate the risk of uncontrollable crises.

Moreover, Lebanese President Michel Aoun assured his crisis-hit nation that discussions with Iranian counterparts have resulted in an initial agreement to supply Lebanon with its wheat needs, which could shield Lebanon from the most severe crisis yet.

As Egypt and Algeria are among the region's producers of wheat, governments in both countries have announced limiting exports of wheat and other staples for several months, to maintain their presence in the local markets.

Meanwhile, governments of Saudi Arabia (7 months), Kuwait (13 months), Jordan (15 months), Syria, and other countries in the region keep reassuring their nations that wheat stocks are enough for several months, expressing hopes that the crisis in Ukraine can be resolved before the end of the year.

The United Arab Emirates has also been discussing plans to buy its wheat needs from India in the coming months, while reassuring the public that its stocks will still be enough for the rest of 2022.

Looking for alternate producers of wheat, eyes are now turning towards India, Australia, and Argentina, where governments have confirmed plans to boost wheat production to unprecedented levels, promising to make up for the absence of Ukrainian and Russian supplies.