Published January 7th, 2021 - 09:30 GMT
Musk tweeted he was 'proud of the Tesla team for achieving this major milestone.' (Twitter)

Elon Musk is on track to become the richest person in the world after a surge in Tesla shares increased his net worth to a whopping $184.5billion.

The car marker's stock price jumped 4.9 per cent on Wednesday afternoon, just two days after finishing the first trading session of the year with a gain of 3.4 per cent.

The boost means Musk now trails Amazon CEO Jeff Bezos by just $3billion in terms of net worth, according to Bloomberg's Billionaires Index.

Bezos has held the title of world's wealthiest person since 2017, and is currently worth $187billion.

It comes after Musk overtook Bill Gates as the second-richest person in November, a significant jump for the entrepreneur who started off 2020 ranked 35.

Musk managed to increase his wealth by more than $146billion in the last 12 months, despite the economic downturn brought by the coronavirus pandemic.

Tesla reported a series of profitable quarters throughout 2020 and joined the S&P 500, establishing the company as one of the world's most valuable businesses.

On Saturday, Tesla Inc. reported better-than-expected 2020 vehicle deliveries, driven by a steady rise in electric vehicle adoption, but narrowly missed its ambitious full-year goal during a punishing year for the global auto industry.

The company delivered 499,550 vehicles during 2020, above Wall Street estimates of 481,261 vehicles, according to Refinitiv data - but 450 units shy of CEO Elon Musk's target of half a million vehicles.

Musk tweeted he was 'proud of the Tesla team for achieving this major milestone.'

'At the start of Tesla, I thought we had (optimistically) a 10% chance of surviving at all,' he said. 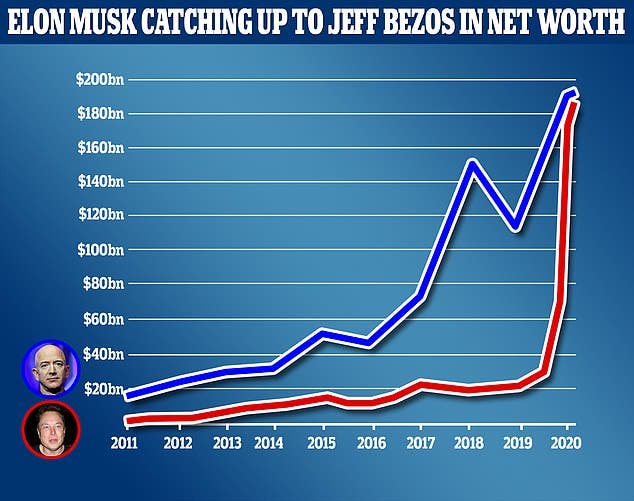