Pfizer CEO Albert Bourla sold 60 percent of his stock in the drug company for $5.6 million Monday - the same day the firm announced its COVID-19 vaccine breakthrough.

The company said on Wednesday the sale was part of a pre-announced trading plan, adopted by Bourla on August 19. Bourla sold 132,508 shares at $41.94 per share, according to a Securities and Exchange Commission filing late Tuesday.

Pfizer on Monday said its experimental COVID-19 vaccine was more than 90 per cent effective based on initial trial results, sending its shares higher along with the broader markets.

'The sale of these shares is part of Dr. Bourla's personal financial planning and a pre-established (10b5-1) plan, which allows, under SEC rules, major shareholders and insiders of exchange-listed corporations to trade a predetermined number of shares at a predetermined time,' Pfizer said.

'Through our stock plan administrator, Dr. Bourla authorized the sale of these shares on August 19, 2020, provided the stock was at least at a certain price.'

Shares in Pfizer hit $41.99 Monday, its highest point in a year and up 15 per cent on the day. Bourla sold off just shy of that peak. 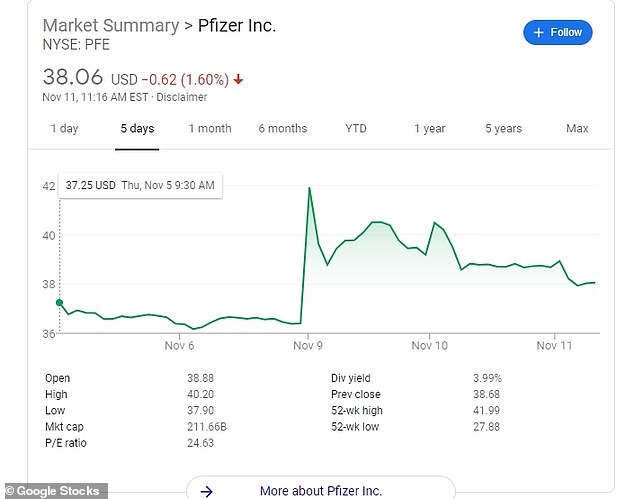 Pfizer on Monday said its experimental COVID-19 vaccine was more than 90 per cent effective based on initial trial results. Its share price over the last five days is pictured 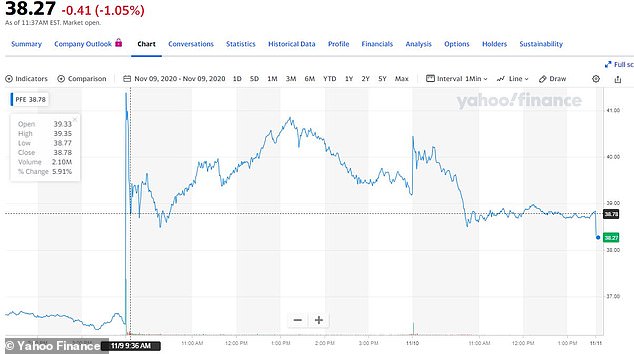 Shares in Pfizer hit $41.99 Monday its highest point in a year and up 15 per cent on the day. Bourla sold off just shy of that peak. Monday's share price across the day is pictured

In May two executives at drug firm Moderna quietly sold nearly $30 million of stock when they unveiled a coronavirus vaccine and value surged, before the share price quickly fell again amid skepticism from the medical community.

Moderna's chief financial officer Lorence Kim and chief medical officer Tal Zaks dumped the stocks when the share price skyrocketed following the company's announcement of what it described as 'positive' results from its vaccine trial.

The two executives pocketed almost $25 million in profits in a day's work before experts cast doubt on the vaccine's success and sent shares tumbling.

In July Kodak CEO Jim Continenza added $79 million to his net worth when his options in the imaging company turned from worthless to lucrative thanks to a U.S. government loan for a pharmaceutical ingredients supply deal. An independent review cleared its chief executive of insider trading in September.

In September, Bourla promised that they would know whether or not the vaccine was effective by the end of October, a deadline that fit with Trump's promise to find a vaccine that worked before the November 3 election.

But that deadline came and went with no news. America went to the polls on November 3. Many told pollsters that the handling of the crisis was one of the most important issues on their minds.

Then suddenly on Monday, after the entire country waited four days for an election result, Pfizer announced their breakthrough, touting it as a 'great day for humanity' and science.

The news sent the S&P 500 and the Dow surging on Monday.

Stocks of companies that most need the economy and the world to return to normal for their profits to heal led the way.

An 11.9 percent surge for Chevron and 12 percent jump for The Walt Disney Co. amid hopes that people will start driving and flying to theme parks again helped the Dow Jones Industrial Average leap 1,255 points in afternoon trading.

Shares in Uber also surged to 9 percent and were on track to close above their $45 IPO price for the first time in 18 months.

Cruise operators and owners of office buildings and shopping centers were among the market's biggest winners on expectations people will feel comfortable again riding elevators to a desk or shopping in enclosed stores.

Carnival surged 34.1 percent, though it's still down by more than half for 2020 so far. It led a resurgence for what are called 'value stocks,' ones whose prices look cheap and had gotten left behind by the rest of the market through the pandemic.

'People are buying those because they see a light at the end of the tunnel,' said Todd Morgan, chairman at Bel Air Investment Advisors.

Pfizer COVID-19 Vaccine Found to be 90% Effective
How Has News of the Pfizer Vaccine Affected GCC Markets?