Published November 16th, 2021 - 12:49 GMT
Gold will generally retain its value during periods of increasing inflation and not get undermined like bonds
Highlights
Gold prices have declined in 2021, driven lower by higher U.S. yields and a stronger dollar.

Gold prices have declined in 2021, driven lower by higher U.S. yields and a stronger dollar. The 5% decline year to date in the yellow metal has been matched by a 5% increase in the dollar index during the same period. Since gold is quoted globally in U.S. dollars, a stronger greenback generally leads to lower gold prices. You can learn more about the gold movements and the nuances of gold trading by spending time tracking its movements. Looking forward, the future direction of gold prices likely depends on your view of the U.S. dollar. Technically, momentum is positive, and gold prices are gaining traction. You can follow gold trading prices with iFOREX.

What are the Supply and Demand Dynamics of Gold?

Gold is generally viewed as a way to store wealth. Gold will generally retain its value during periods of increasing inflation and not get undermined like bonds, with higher prices of goods and services. Throughout history, many countries have tied the value of the currency to the yellow metal. This situation was even the case in the United States. In the 1970's President, Nixon decided to let the value of the U.S. dollar float, which allowed it to become the reserve currency. The price of the dollar was then decoupled from the value of gold.

The production of gold comes from gold miners, who dig the yellow metal out of the ground. Several processes are used. Miners pick up gravel and rock and sift them through the water. Because gold has a greater density, it will sink quickly to the bottom, providing separation from other particles.

Gold is a precious metal and is viewed as a way to store wealth. It's a cash alternative and is accepted globally. Gold is used as a reserve currency by central banks, one of the largest consumers of gold. Gold is stored in vaults and is usually comingled. A commingled account is where bars and bullion are kept, and all the gold has the same value per ounce. There are also plenty of entities like the central bank that will store gold in their vaults.

What can impact Gold Prices?

The value of gold has been fluctuating and appears to be revolving with the U.S. dollar. A 5% gain has matched the year-to-date decline in gold prices in the dollar index. The trend in the dollar index is upward sloping, but some softer-than-expected economic data could reduce the likelihood that the Fed will begin to raise rates in mid-2022. U.S. short-term treasury yields have been accelerating higher, pushing the interest rate differential between U.S. Treasury yields and Germany yields in favor of the dollar. If this trend persists, the dollar could trend higher, putting downward pressure on gold prices. When the Fed starts to increase interest rates, it may signal to commodity traders that the peak in the commodity cycle is imminent. 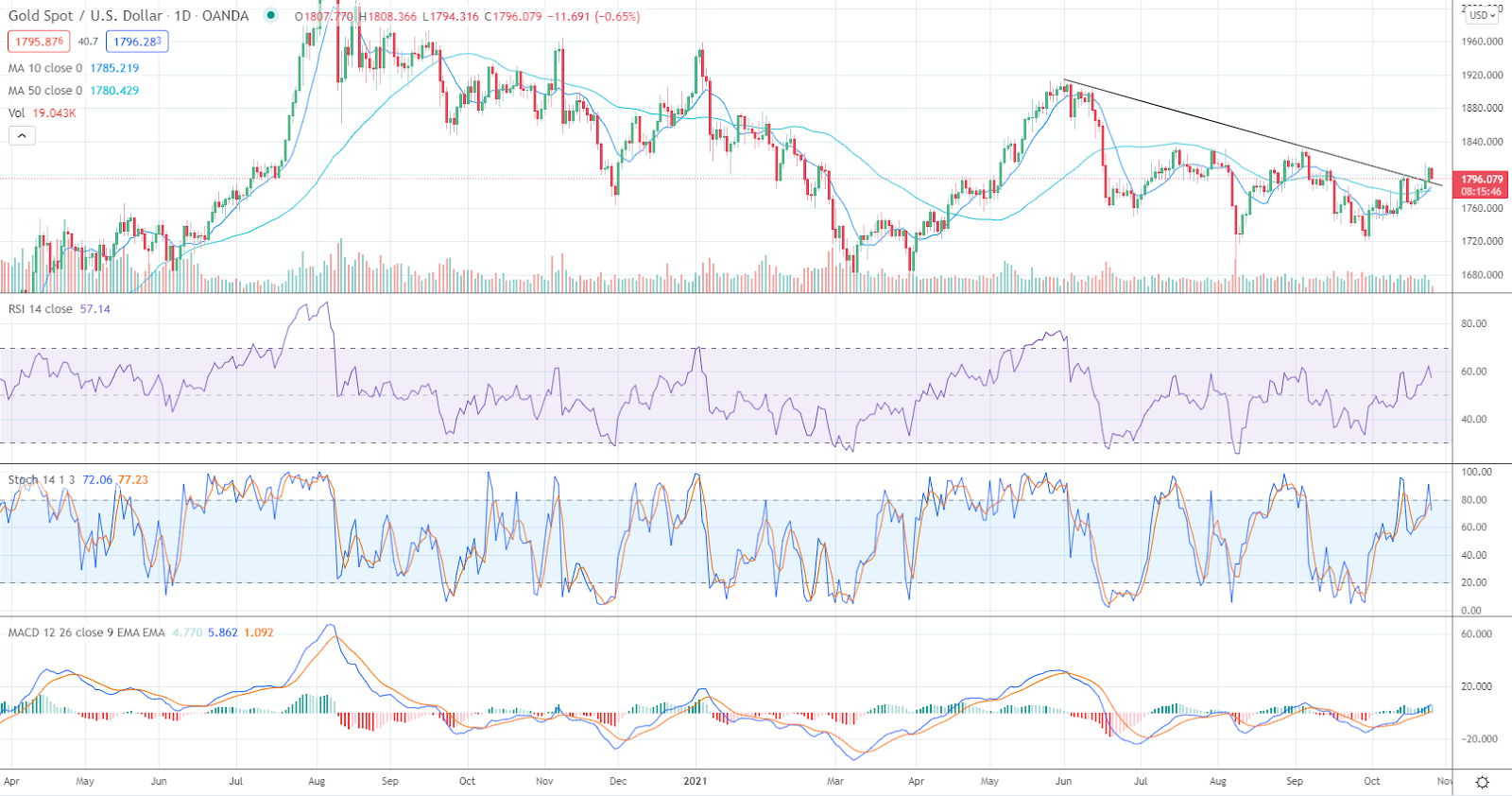 The upshot is that gold is viewed as a way to store value. Alternatives include other precious metals, stocks, bonds, cash, or cryptocurrency. Gold is mined in the earth, and the robust density of gold allows it to be separated from the water as part of the extraction process.

Gold offers a liquid market with an interest rate called the Gold Forward Rate. The movements between the dollar and gold prices have been negatively correlated. With U.S. yields rising, signaled by the Fed's willingness to taper their bond purchase program, the differential between U.S. yields and European yields could widen. This movement could help buoy the U.S. dollar and could put downward pressure on gold prices. While this might be the longer-term trend, the counter-trend moves can be sharp. The technical points to a breakout in gold prices, as momentum turns positive. Gold prices could remain volatile as the markets begin to price in further rate hikes as inflation stays elevated.

WieeMedia is an online performance marketing agency pecializes in working with Automotive, Health, and FinTech companies and startups