Published September 18th, 2022 - 07:00 GMT
Members of the public camp behind barriers lining the procession route, ahead of the funeral on Monday of the late Queen Elizabeth II, in London on September 18, 2022. Britain was gearing up Sunday for the momentous state funeral of Queen Elizabeth II as King Charles III prepared to host world leaders and as mourners queued for the final 24 hours left to view her coffin, lying in state in Westminster Hall at the Palace of Westminster. (Photo by Oli SCARFF / AFP)

Preparing for the funeral of the year, the UK is arranging a considerable state funeral for Queen Elizabeth II, who passed away peacefully on the 8th of September, 2022, but the event expected to host hundreds of world leaders comes at a very challenging time for the British economy. 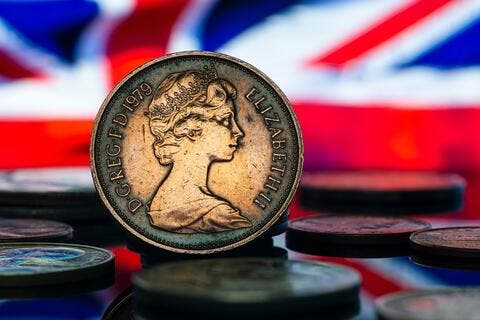 For the past 11 days, thousands of British people flocked to streets in London and elsewhere to pay tribute to the late queen, who has ruled over the United Kingdom for more than 70 years.

The UK is projected to spend an estimated $9 million on Queen Elizabeth's funeral, amid warnings the country is heading toward recession and skyrocketing costs of living.

Over 2 million people in the UK cannot afford to eat every day, surveys show. 🧵 pic.twitter.com/psgpVRAMbR

While the cost of 10 full days out of the 11 mourning days is said to be paid by the Royal family, the one-day state funeral scheduled on Monday, the 19th of September 2022 will be covered by the UK government and is estimated to cost more than 9 million pound sterling, according to a former royal security officer.

Even though this figure covers preparations of the formal ceremony security expenses for members of the royal family, the Queen's coffin, and local and international leaders attending the funeral, the number is still compromising one of the highest one-day expenses in UK history.

Media sources have also noted that the state funeral will feature one of the biggest police operations in the UK, as intelligence agencies will cooperate with London’s Metropolitan Police and the Secret Service to provide full protection for the historic event, which explains the extremely high cost of the funeral.

While the cost of Monday's funeral is still raising many questions in terms of the British economy's ability to survive such a major expense, at a time it's suffering its worst inflation in over 40 years, exceeding 10% in August 2022, many have noted that the 12-day mourning period has had an even more devastating impact on the UK and its people.

According to AJ+, the Queen's death will cost the UK economy around $6.9 billion, which does not only cover the funeral costs, but also the coronation of King Charles III, and the expenses of all the changes expected to take place in the country during the new era, including travel documents, coins, and others.

The disruption of economic activities expected on the day of the state funeral is also feared to leave a negative impact on the UK economy. Experts have pointed to the 0.6% drop in GDP last June, which has been linked to the nationwide celebrations of the Queen's Platinum Jubilee and the ceremonies that were held during that month as a result.

Current estimates reported by Fox Business fear that closures on Monday will cost the UK economy around $2.6 billion. However, they expected a boost in tourism as a result of the event's popularity, one that may not be profitable enough to make up for the losses. 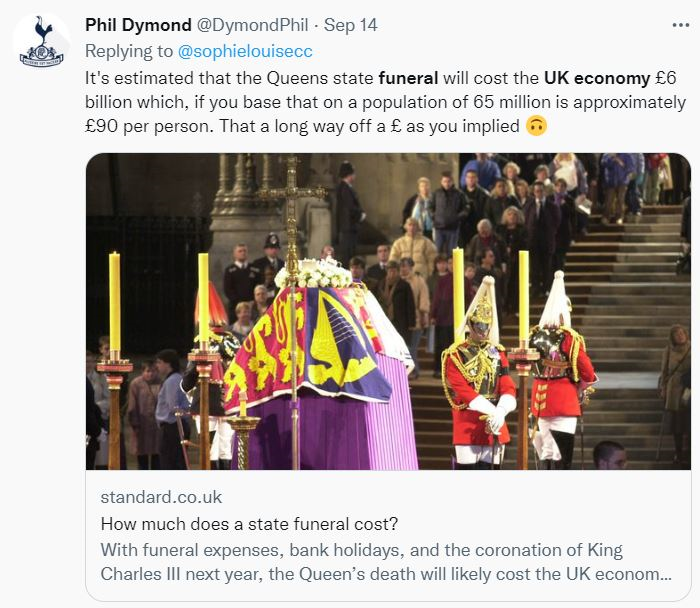 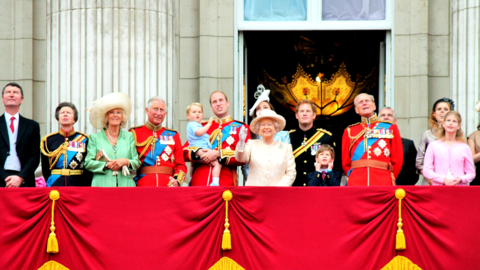 It was only two days before the Queen's passing that a new Prime Minister was appointed with the highest priority being tackling the economic meltdown and the energy crisis that is feared to affect nearly 70 million people across the United Kingdom this winter, in the wake of the Ukraine-Russia war.

During the 2022 winter, energy prices spiked by 27% in the United Kingdom, which means that the 2023 winter will be an even harsher one, given the changes in terms of gas availability to European countries, after sanctions against Russia and the country's measures when it comes to supplying its natural gas using the Russian ruble, instead of the US dollar.

Last May, British media reported that more than 2 million people across the country "can not afford food every day", a figure that is expected to grow higher in later months of the year.