Published May 1st, 2021 - 07:30 GMT
SAMA also pointed out that the record growth rates witnessed in the e-payments through the national payment system "Mada" is a result of Mada strategic plan, he added. (Shutterstock)
Highlights
The data covers 11 listed banks and some foreign banks operating in the Kingdom
Saudi Arabia-listed banks reported a 14 percent rise in aggregate net profit before Zakat and tax to the tune of SR 4.02 billion in March 2021 as against SR 3.53 billion a year earlier, according to data from the Saudi Central Bank (SAMA).

The data covers 11 listed banks and some foreign banks operating in the Kingdom. 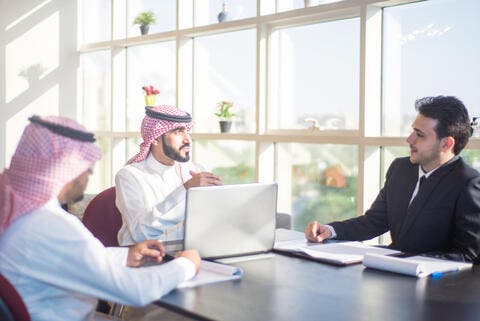 Banks' aggregate assets grew by over 11 percent year on year (YoY) to SR 3.035 trillion in March, combined deposits increased by 9 percent YoY to SR 1.980 trillion in the same month, whereas loans to the private sector saw an increase of 15 percent YoY to around SR 1.871 trillion by the end of March, financial news portal Argaam reported.

Talat Zaki Hafiz, financial analyst and banking expert, told Arab News: " the obvious reason for the aggregate reported net profit by Saudi banks to show a rise of 14 percent is the positive return back of the banking sector to the normal operations after a long period of lockdown (partially and completely) of more than than 70 days, between March and May last year due to the COVID19 pandemic as part of precautionary measures taken by the Saudi government to prevent the spread of the virus."

During the lockdown Saudi banks were able to serve its clients normally, despite the fact that in certain days of the lockdown the sector was operating with only 25 percent of its branches network capacity which exceeds in total 2000 branches Kingdom-wide, he added.

Saudi banks utilised technology and electronic payments to serve customers effectively as is evident from report by SAMA, which also indicated that the rate of e-payments for the retail sector - Individual Retail Payments by the end of July 2019, amounted more than 36 percent of all payments available, exceeding the targeted percentage of the financial sector development program (FSDP), one of the key programs of Saudi Vision 2030, he underlined.

FSDP stipulates that the share of non-cash transactions should be increased by 28 percent by 2020, he added.

"This achievement is based on SAMA's strategy for payment systems and the FSDP, which aims to enhance e-payment and reduce cash handling to reach 70 percent of total payments in the Kingdom by 2030," said Hafiz.

SAMA also pointed out that the record growth rates witnessed in the e-payments through the national payment system "Mada" is a result of Mada strategic plan, he added.

Launching Mada Atheer (NFC) service has had a major impact in enhancing e-payment, especially after the introduction of mobile payment services.

"These positive indicators were the result of SAMA's efforts to support use of electronic channels in cooperation with the local banking sector with the participation of relevant private service providers, as well as the constant cooperation of SAMA with government entities to promote e-payment," he added.

Dr. Osama Ghanem Al-Obaidy, Advisor and Professor of economic law at the Institute of Public Administration, Riyadh told Arab News: "The increase in net profits of Saudi banks and foreign banks operating in the Kingdom is due in part to corporate credit growth which picked up substantially in 2021 after the Public Investment Fund (PIF) programs helped generate additional business for contractors and credit to small and medium enterprises (SME)."

He said: "Saudi banks and foreign banks operating in the Kingdom outperformed their regional counterparts. This reflects the relatively low impact of the pandemic on the performance of Saudi banks loan books and higher growth of mortgage lending."

The outlook for Saudi banks and foreign banks operating in the Kingdom is expected to remain positive, he added.

This rise in net profits is also due to lower impairments and higher fees and commissions which is indicative of the Saudi economy’s resilience and recovery from the pandemic impact, he reasoned.

"Saudi banks have also benefited from an increase of their total operating income due to higher net commission income, invested related income and higher fees from banking services. Also mergers between Saudi banks such as the merger between the National Commercial Bank and Samba financial group will help increase such profits," said Al-Obaidy.