UAE: Employees are Keen on Being Part of AI Reskilling Revolution

Published September 21st, 2020 - 10:30 GMT
Companies putting AI first are focused on ensuring that it is complementing the talents of its staff, with employee skills being cultivated across each category. (Shutterstock)
Highlights
There is a direct correlation between skilling and the value that it adds to an organisation: Microsoft study
An overwhelming majority of employees in the UAE are keen to be part of the AI reskilling revolution, which would support the creation of company cultures more focused on innovation and learning, a new study from Microsoft has discovered.

The tech bellwether's Skilling for the Age of AI report for the UAE found that almost all workers - 97 per cent - want to be part of reskilling initiatives, with the majority (77 per cent) of those working in an organisation using more of artificial intelligence saying their company is actively preparing them for a digital future that will be increasingly powered by AI.

"Every business and industry has had to adopt significantly to the disruption that was unimaginable," Ihsan Anabtawi, COO and CMO of Microsoft UAE, said during a virtual presentation.

"The situation is evolving and [changing] behaviours will persist. there is a direct correlation between skilling and [the] value [that it adds to an organisation]."

Microsoft's study revealed that companies putting AI first are focused on ensuring that it is complementing the talents of its staff, with employee skills being cultivated across each category.

Among UAE firms that are most mature in AI adoption, 93 per cent of their top management say they are actively building their employees skills or at least have it in their plans. For employees, 78 per cent of those in these organisations say they have already benefitted from reskilling programmes. 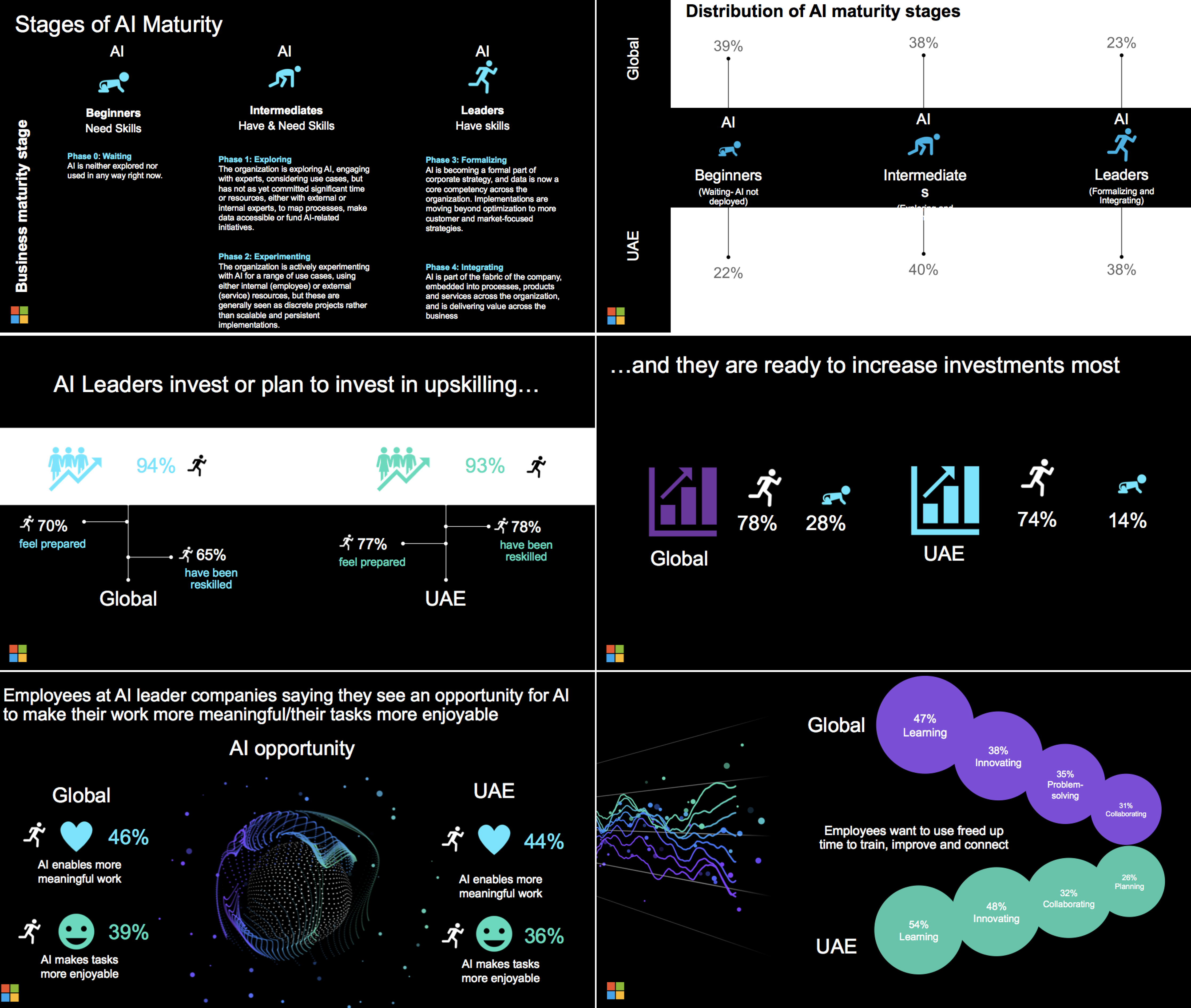 "We're seeing a virtuous cycle emerge among those companies that extract the greatest value from AI," Anabtawi added.

"These leaders have realised that having the right skills enables them to unlock more value from AI, which levels up skills across their whole organisation."

Employees in the UAE are also more pumped up to gain additional skills compared to global figures. About 97 per cent of those in the UAE are motivated and want to participate in reskilling programmes compared to 92 per cent overall. Sixty-two per cent in the UAE feel their company is currently doing enough to prepare them for AI against 42 per cent globally.

The figure is also significantly higher when it comes to employees considering a job elsewhere if their organisation doesn't invest enough in this endeavour (74 per cent versus 49 per cent).

Microsoft, in the study, also defined the stages of AI maturity to beginners, intermediates and leaders. Beginners is where AI is neither explored nor used in any way; intermediates have companies exploring the use of AI and engaging experts while they're at it; and leaders is where firms have AI as a formal part of their corporate strategy - even part of their fabric.

Managers saying their company is gaining value from AI at each maturity stage is also higher in the UAE, 83 per cent against the global 59 per cent figure in the intermediate level. The leaders level, however, sees the global number pip the UAE, 84 per cent to 77 per cent. No companies surveyed fell in the beginners stage.

AI leaders that are investing or planning to invest in upskilling are almost even on both stages, 93 per cent for the UAE and 94 per cent globally.

Microsoft's study was conducted with enterprise-level companies in 20 countries, involving over 10,000 employees and more than 2,000 decision makers.