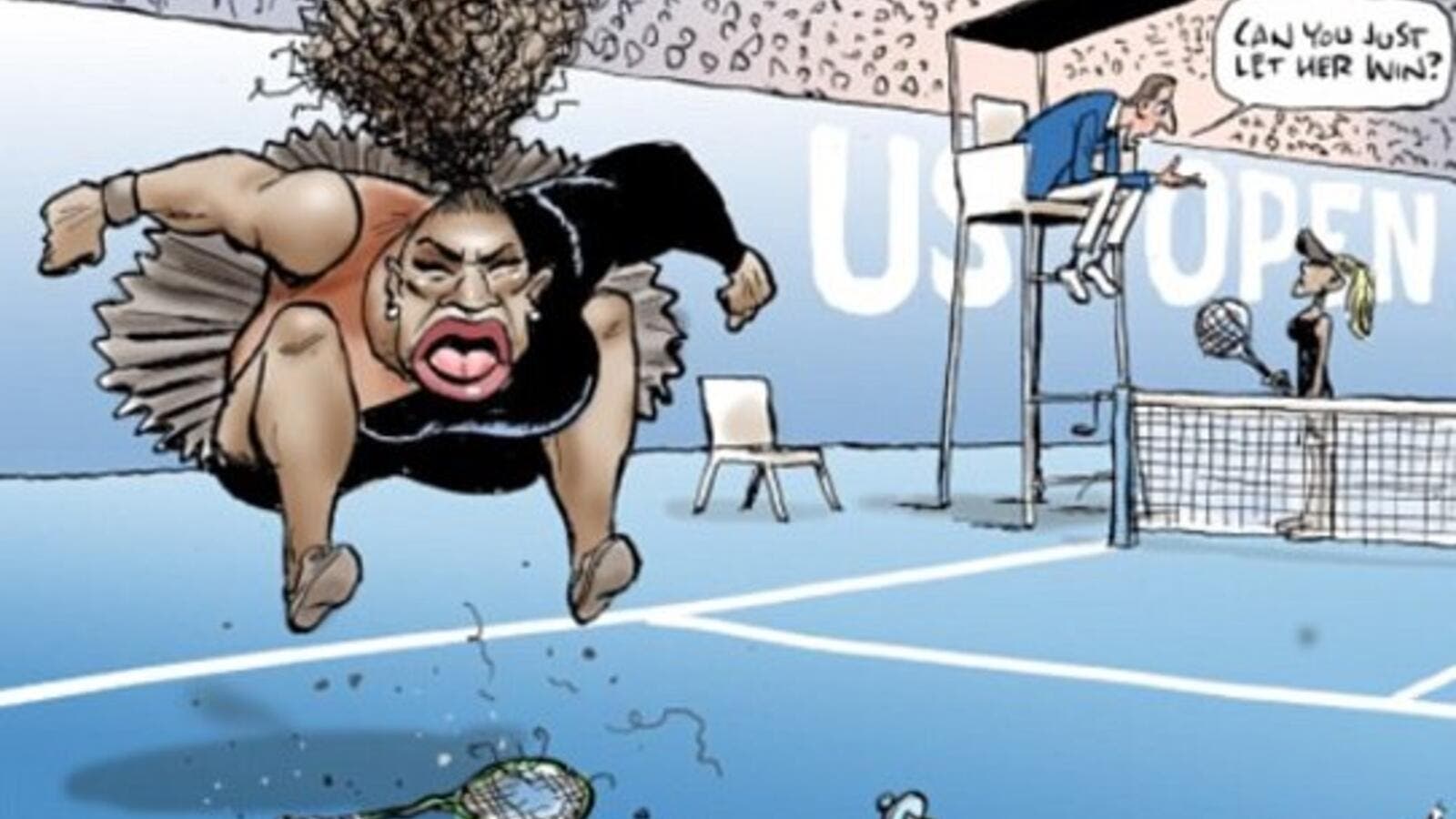 The Herald Sun has defended Mark Knight's cartoon of Serena Williams at the US Open, saying it has 'nothing to do with race (Twitter)

The cartoonist behind a racist depiction of Serena Williams at the U.S. Open final deleted his Twitter account on Tuesday as his Rupert Murdoch-owned newspaper tried to defend the controversial illustration.

On Tuesday, The Herald Sun ran an article titled 'Herald Sun backs Mark Knight's cartoon on Serena Wiliams' in which the newspaper's editor Damon Johnston said: 'It had nothing to do with gender or race. This was about a bad sport being mocked.'

Knight, who hit back at one Twitter critic who called him sexist but said nothing to the tens of thousands of people who labeled him racist, erased his profile after going on an Australian radio show to plead his case.

On Monday, he had shared the image proudly writing: 'My toon in today's Herald Sun.'

Within minutes, he was inundated with criticism from people all over the world who called the image 'disgustingly racist' and 'truly vile'.

The cartoon depicted Williams as a baby having a tantrum with a pacifier spat-out at her feet, her fists clenched and her eyes shut.

It was not the characterization of her as a baby which offended, but rather the enlarged size of her lips and nose which many said were reminiscent of Jim Crow-era illustrations of African American women.

Others were outraged by the fact her opponent, Haitian-Japanese 20-year-old Naomi Osaka, was depicted by Knight as slender, white and blonde.

But despite tens of thousands of complaints, neither Knight nor the newspaper acknowledged any wrongdoing.

Knight, in defending his illustration, told the radio show 3AW: 'It's a cartoon about poor behavior. It's nothing to do with race.

'I'm sorry it's been taken by social media and distorted so much.'

In a separate interview with ABC, he said: 'I drew her as an African-American woman.

She’s powerfully built. She wears these outrageous costumes when she plays tennis.

'She’s interesting to draw. I drew her as she is, as an African-American woman.

'So, this whole business that I’m some sort of racist, calling on racial cartoons from the past, it’s just made up. It’s not there.'

The newspaper ran three separate articles in support of Knight on Tuesday.

One was an editorial which read: 'The world has officially gone mad when a celebrated cartoonist is condemned by the social media hordes for depicting a famous sports star throwing an unedifying tantrum.'

Australian cartoonists lined up to defend him and said his critics had misunderstood his art.

Their comments celebrating him were promoted by the newspaper and included the assertion that the global outrage in response to the image was a sign of the 'PC brigade' going too far.

Among those who were enraged and disgusted by Knight's cartoon was J.K. Rowling.

'Well done on reducing one of the greatest sportswomen alive to racist and sexist tropes and turning a second great sportswoman into a faceless prop,' she said on Monday.

Kathy Griffn called him a 'racist piece of s**t' and told him: 'Just change your name to KKK cartoons.'

She challenged Knight directly, saying on her radio show: 'Our culture and our community loves this woman’s body, by the way.

'You drew this woman trying to be funny or looking like you were trying to make fun of her or some s**t like, are you out of your f****** mind?

'I am all for people having freedom, I’m not getting on him in terms of saying you’re not allowed to express yourself, but I just feel like you went out of your way to make her look badly, physically badly, and this is a sexy woman.

'Why the f*** is everyone allowed to be passionate but black women? Why? Give me a break.

'I just want to know why did you… draw a picture of this legend in our community, making her look like this? Like some sort of an animal having a temper tantrum.'

Others deemed it 'disgustingly racist', 'truly vile' and 'an insult to both women'.

'In 100 years time this cartoon will be viewed no differently than old images of Jim Crow, or the newspaper cartoons drawn of Jack Johnson. Mark Knight has just drawn his way into the history books,' said one critic.

Others likened it to the black mammy cartoons and memorabilia that are synonymous with the Jim Crow era.

They were equally outraged by his depiction of Williams as they were of him 'white washing' Osaka.

'And who is the white girl? Her opponent is Haitian & Japanese.

'You're clearly trying to send a racist message. Disgusting,' another critic said.