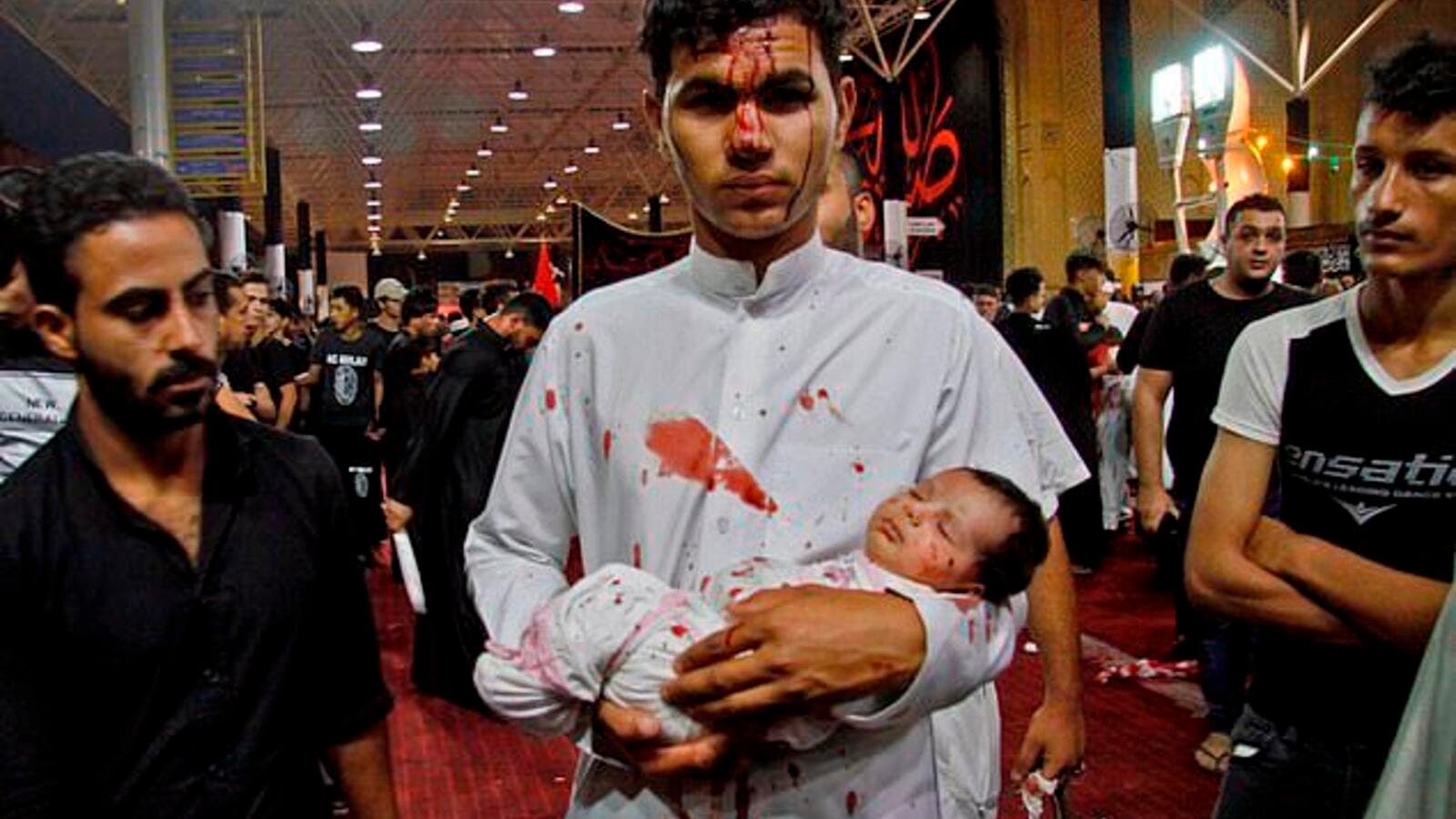 Young participant: A man holds a baby during an Ashura cutting ceremony, which sees male Shiite Muslims self-flagellate to commemorate the death of Imam Hussein, the grandson of the Prophet Muhammad, on the battlefield (AFP)

Celebrations of the holy Muslim day of Ashura is continuing around the globe, with sacred self-flagellation rituals leaving worshippers covered in blood.

The holiday is celebrated by Shiite Muslims, and mourns the death of Imam Hussein, the grandson of the Prophet Muhammad, on the battlefield in the 7th Century.

The gory ceremonies, which sees males of all ages cut themselves across the scalp, or whip themselves with blades attached to chains, are meant to commemorate Imam Hussein's violent end.

Photographs show babies spattered with blood after having been held by their fathers during a cutting ceremony in Najaf, Iraq.

Another image sees a woman bandage a young boy's head after he has had a small cut to his scalp.

Many of the worshippers wear white clothes, which are then coloured bright red by the blood streaming from head wounds and flagellation ceremonies.

Ashura is celebrated on the tenth day of Muharram — the first month in the Islamic lunar calendar. This year, Ashura begins in the evening of September 20 and ends at sundown on Friday September 21.

For Shia Muslims, the annual Ashura commemorations mark the killing of Imam Hussein by the forces of the Caliph Yazid in 680 AD.

The beheading of Imam Hussein and the killing of his family was part of a dispute over who should succeed the Prophet Mohammed.

This dispute eventually developed into a bitter schism between the Sunni, who make up around 90 per cent of Muslims, and Shia branches of Islam.

Many Shiite worshippers travel from neighbouring Iran and other countries each year to visit Imam Hussein's shrine in Karbala, which lies about 50 miles southwest of Baghdad, Iraq.

Millions of others across the Shiite world, from Lebanon to south Asia, hold processions in their home towns, performing a variety of mourning rituals.

Some of these involve Shiites beating their chests and slapping their faces, which is referred to as Latyma.

Others see them whipping themselves with bladed chains until they bleed, to commemorate the violent deaths of Hussein and his family.

The faithful also drive in convoys through the streets carrying colourful flags and playing songs dedicated to Hussein.

Sunni Muslims also mark Ashura, as the day Moses was saved from the Egyptians by God.

It’s observed as a day of atonement for Sunnis, allowing those participating to be forgiven for the sins they committed in the previous year. Many Sunni Muslims observe Ashura as a fast day.