The ‘Nasrin’ Film Spotlights a Human Rights Fighter in Iran

Published December 16th, 2020 - 07:47 GMT
Millions of people from more than 200 nations are calling for Nasrin Sotoudeh’s release. (Twitter)
Highlights
Filmmaker Jeff Kaufman tells of his admiration for Nasrin Sotoudeh and the activists who shot his documentary in secret inside Iran.

It is one thing to criticize the brutality of the Iranian regime from outside of the country; it is quite another to do so from within, under constant surveillance by the nation’s secret police or even from the inside of a prison cell.

Yet that is exactly what Nasrin Sotoudeh has been doing for most of her life. As a lawyer she fought for the rights of dissidents who dare to condemn the oppressive actions of Iran’s religious rulers.

Her poignant and inspirational story is told in a new feature-length documentary film that was secretly recorded inside Iran. “Nasrin,” which is narrated by Oscar-winning British actress Olivia Coleman, reveals how a woman who was one of her country’s leading lawyers, fighting to preserve freedom of speech and human rights, was torn from the arms of her husband and two children by Iran’s secret police and locked up. 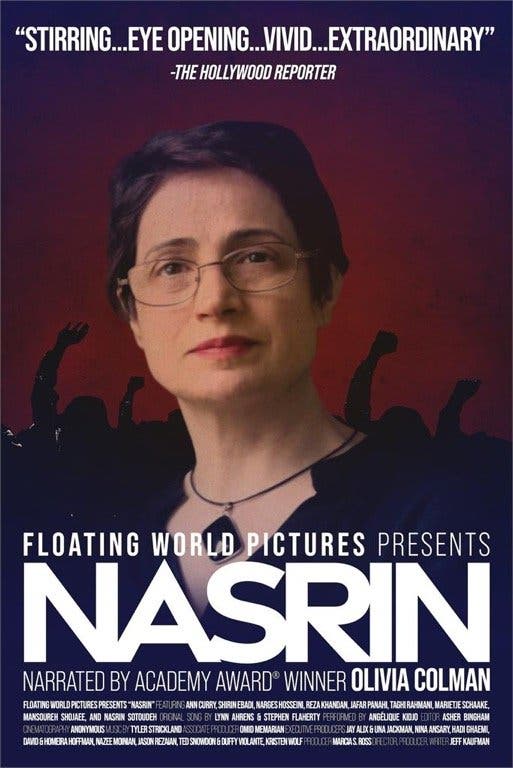 “Nasrin Sotoudeh is one of the most remarkable human-rights activists on the planet,” said Emmy-nominated filmmaker Jeff Kaufman, the film’s producer, director and writer.

“She has been called the Nelson Mandela of our time, for good reason. She has for decades used her legal work to advocate for human rights in Iran, grassroots democracy in Iran (often representing) people of religious minorities in that country, children, fighting against the death penalty.”

Kaufman explained that his film aims to show international audiences the reality of life as an Iranian in modern-day Iran.

“(The film) profiles Nasrin and her work but we also really wanted to bring alive the rich culture of Iran and show that there is a difference between the leadership of that country and the people of that country,” he said.

The documentary was secretly filmed in Iran by a team of men and women who risked arrest and harsh punishment to tell the story of Sotoudeh’s activism on behalf of prisoners and the families of people who “disappeared” after standing up to the Iranian regime.

He added: “Just picking up a camera and walking around with Nasrin Sotoudeh can get you in a lot of trouble.”

The film was shot over a two-year period, ending in June 2018, that included some shocking and frightening developments.

“One day, Marcia and I were talking to Nasrin and her husband on FaceTime as they were walking through a beautiful park in Tehran, talking about their lives and work and things like that — and about two days later, Nasrin was arrested,” Kaufman said.

“She was charged, in part, for defending women in this movement called the ‘Girls of Revolution Street’ where they take off their hijabs and wave them in public. But it was really retaliation for all of Nasrin’s human rights work. She was sentenced to 38 years in prison and 148 lashes.”

It is not the first time Sotoudeh has been locked up. She was arrested in 2010 and spent more than three years in jail before she was released. During her periods of detention, she has gone on hunger strike several times to protest against the way she and her family were being treated. In August this year she began another hunger strike, this time calling for the release of political activists from prisons “because the health conditions there are horrible — they are ravaged by COVID-19” Kaufman said.

“Rather than release Nasrin, they sent her to another prison where she contracted COVID herself and she (was sent) home on a temporary health leave, having both COVID-19 and a heart condition,” he added. “She was told that health leave would stay active for a while but last week she was abruptly sent back and is in prison now.”

Kaufman compared Sotoudeh to heroes of the American civil-rights movement who fought for equal rights and justice for African Americans, such as Georgia congressman John Lewis, who died on July 17 and with whom Kaufman had worked. Lewis was one of six leaders, including the Rev. Martin Luther King Jr., who organized the 1963 March on Washington. He and King were beaten by police during the 1965 protests in Selma, Alabama.

“(Lewis) saw that his own struggle for civil rights had a universal element, and he realized that connected him to the struggle for LGBTQ rights and for woman’s rights as well,” said Kaufman.

“Nasrin is very much like that. Personally, she reminds me so much of John Lewis: (she has) great warmth and a wonderful sense of humor, a smile that can light up a room.”

She also has great strength, he added, which can clearly be seen in the documentary.

“You see in the film, when she is arguing in Revolutionary Court in Tehran on behalf of Shirin Ebadi and there is a judge and a prosecutor in a room against her, she is tough,” said Kaufman. “She may be small, she may be frail right now, but she is one of the toughest people I have ever seen.”

Ebadi is Iranian political activist, lawyer, former judge and human rights activist who founded the Defenders of Human Rights Center in Iran. She was awarded the Nobel Peace Prize in 2003 for her work fighting for the rights of women, children and refugees.

“Nasrin” will be available to stream online from Dec. 18. Visit www.NasrinFilm.com for more details and to watch the trailer.