Published June 29th, 2022 - 07:31 GMT
Soft toys are seen inside the bag of an immigrant as they wait outside a shelter home in San Antonio, Texas on June 28, 2022. Every year, tens of thousands of migrants fleeing violence or poverty in Central and South America attempt to cross the border into the United States in pursuit of the American dream. (Photo by CHANDAN KHANNA / AFP)
Highlights
Sisters Carla and Griselda Carac-Tambriz were among the 51 migrants left to die in a semi-truck trailer

Two sisters pursuing the so-called American Dream were among the 51 migrants left to die in an abandoned semi-truck trailer in the sweltering Texas heat. 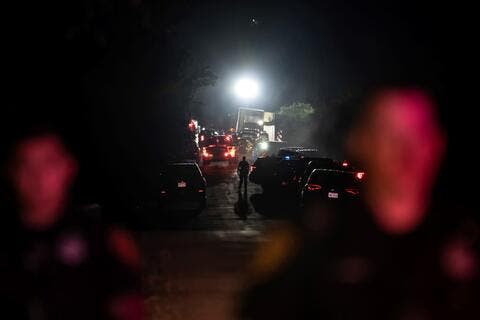 Biden is Shocked at The Death of 50 Migrants in Texas

Carla and Griselda Carac-Tambriz, of Guatemala, died Monday after boarding the truck in pursuit of a better life.

'Let's achieve our dreams and also help our family,' one of the sisters reportedly said before the pair embarked on their journey to the U.S.

Seven Guatemalan nationals were among those killed in the trailer. Twenty-two of the deceased migrants were from Mexico and two from Honduras.

The incident marks the deadliest human smuggling on American soil since 2003 when 19 migrants died after riding inside the rear compartment of sweltering 18-wheeler while they traveled from South Texas to Houston. The death toll rose to 51 from 46 on Tuesday afternoon.

It also comes as the U.S. has reported a record number of migrant crossings, rescues and deaths under the leadership of the Biden Administration.

Authorities believe the migrants were loaded into the semi-truck in Laredo, a border city, on Monday afternoon and driven 150 miles before smugglers abandoned the vehicle after it suffered mechanical problems.

A city worker found the vehicle discarded on the outskirts of San Antonio, next to a railroad track in an area surrounded by auto scrapyards, around 6pm after hearing a faint cry for help emanating from the truck.

'They had just parked it on the side of the road,' Bexar County Judge Nelson Wolff, the county's top elected official told reporters on Tuesday. 'Apparently had mechanical problems and left it there. The sheriff thinks it came across from Laredo.'

Forty-six people, including 39 men and 12 women, were found dead at the scene, authorities said. Four more later died after being taken to hospitals. No children were among the deceased.

Police suspect several migrants may have jumped or started falling out of the back of truck before the traffickers abandoned it along the roadway.

At least three bodies were found scattered down road, with the furthest one located about 75 yards from the truck, law enforcement sources confirmed to The New York Times.

Officials also said it was possible that those found along the road had died inside the truck, but fallen out when its doors opened. Police are now searching nearby fields for bodies and are trying to determine if anyone escaped the trailer alive.

Firefighters found 'stacks of bodies' in the truck after temperatures reached a high of 103 degrees Monday and officials claim there were no signs of water in the semi.

Some of the victims staggered out of the trailer before dying and were found several blocks away, police told The Texas Tribune. The migrants had been sprinkled with steak seasoning in apparent bid to cover up their smell as they were being transported.

Police were asking neighboring counties to help with the number of bodies. Authorities are not confident they have accounted for everyone from the truck and are still working to tally the total number of victims.

San Antonio Police Chief William McManus said the semi-truck driver, whose identity was not disclosed, is in federal custody. He was detained by officers in a nearby field after having fled the area on foot.

Initial reports indicate three individuals have been arrested in connection to the deaths. It is unclear what role the other two suspects played in the incident.

The truck had U.S. and Texas registration numbers listed on the cab. State department on transportation records connected the tags to an Alamo resident.

However, the resident's son-in-law, Issac Limon, claims those running the smuggling ring fraudulently printed the tags on the truck.

'It was a perfect setup,' Limon told The Washington Post. 'The truck is here. I'm looking at it right now. Sad to say, but he's a bit of a victim, too, because people believe it was him.'

Limon claims the truck that actually corresponds with the registration is a Volvo and was being used to haul grain over the past week in another part of Texas.

He noted that is father-in-law was 'shaken up' by the incident.

The truck was found abandoned by auto salvage yards and railroad tracks around 6pm Monday.

McManus said a nearby worker 'heard a cry for help and came out to investigate', before finding the trailer's doors partially opened upon arrival and discovering dozens of bodies.

Texas has been experiencing a near-record heat wave, while temperatures in San Antonio, which is about 160 miles from the Mexican border, swelled to a high of 103F on Monday with high humidity.

'The patients that we saw were hot to the touch. They were suffering from heat stroke and exhaustion,' fire chief Charles Hood said in a Monday press briefing.

'[There were] no signs of water in the vehicle. It was a refrigerated trailer, but there was no visible working AC unit on that rig.'

Local workers allege the area where the truck was discarded, along Quintana Road, has been a popular migrant drop-off spot since the early 1990s.

'I know when I first started in the yards a lot of people came from Mexico,' Rose Ann Iniguez, manager of Junk Yard Dogs auto salvage, told The New York Times.

'They were hungry and thirsty. They'd come through the yard and wanted to work, but we didn't have work. We'd let them pick up whatever parts were on the floor to get them going with a little money.'

She added: 'They're human. I know why they are coming. They have to survive, too.'

President Joe Biden, addressing the tragedy Tuesday, called the deaths 'horrifying and heartbreaking' and said it further underscores the 'need to go after the multi-billion dollar criminal smuggling industry preying on migrants and leading to far too many innocent deaths.'

White House Press Secretary Karine Jean-Pierre tried to deflect blame on Tuesday, but instead made a confusing statement that appeared to take ownership for the tragedy by saying the border is 'closed.'

'The fact of the matter is the border is closed, which is, in part, why you see people trying to make this dangerous journey using smuggling networks,' Jean-Pierre told reporters during a flight from Munich, Germany to Madrid, Spain.

Biden blamed the tragedy on 'human traffickers who have no regard for the lives they endanger and exploit to make a profit.'

'Exploiting vulnerable individuals for profit is shameful, as is political grandstanding around tragedy,' the president said, reiterating he was dedicated to combatting the skyrocketing migration at the southern border.

He added: 'My Administration will continue to do everything possible to stop human smugglers and traffickers from taking advantage of people who are seeking to enter the United States between ports of entry.'

Texas Governor Greg Abbott hit out at Biden following the deaths, blaming the deadly incident on his administration's lax approach to border control - a key issue for the upcoming November elections.

The deaths 'are the result of his deadly open border policies,' Abbott wrote. 'They show the deadly consequences of his refusal to enforce the law.'

'Horrific. This..is..WRONG' Sen. Ted Cruz tweeted after news of the deaths first broke. 'How many more people have to die before Dems give a damn?'

Secretary Mayorkas responded to the incident, alleging he was 'heartbroken' and issued his prayers for the injured.

'I am heartbroken by the tragic loss of life today and am praying for those still fighting for their lives,' he said. 'Far too many lives have been lost as individuals – including families, women, and children – take this dangerous journey.'

The DHS secretary called the human smugglers 'callous individuals who have no regard for the vulnerable people they exploit and endanger in order to make a profit' and alleged the U.S. Immigration and Customs Enforcement (ICE) was investigating the incident.

Democrats hit back, placing blame on the GOP for the tragic loss of life.

Democrats claim that Republicans ire toward Biden and his party over the migrants' death is just 'right wing talking points' to further peg the southern border crisis on the left.

The I-35 highway near where the truck was found runs through San Antonio from the Mexican border and is a popular smuggling corridor because of the large volume of truck traffic, according to Jack Staton, a former senior official with ICE's investigative unit who retired in December.

Staton said migrants have regularly been intercepted in the area since the 2017 incident.

'It was only a matter of time before a tragedy like this was going to happen again,' he said.

Monday's deaths highlight the challenge of controlling migrant crossings at the U.S.-Mexico border, which have reached record highs.

Migrants - largely from Mexico, Guatemala, Honduras and El Salvador - have been expelled more than 2 million times under a pandemic-era rule in effect since March 2020 that denies them a chance to seek asylum but encourages repeat attempts because there are no legal consequences for getting caught.

People from other countries, notably Cuba, Nicaragua and Colombia, are subject to Title 42 authority less frequently due to higher costs of sending them home, strained diplomatic relations and other considerations.

Border Patrol performed 14,278 'search-and-rescue missions' in a seven-month period through May, exceeding the 12,833 missions performed during the previous 12-month period and up from 5,071 the year before.

Border agents attribute the higher-than-usual number of repeat crossings in May due to the fact that migrants expelled under Title 42, a pandemic-era restriction currently tied up in court, face no legal repercussions if they try to cross again.

Border Patrol reported 557 deaths on the southwest border in the 12-month period ending Sept. 30 2021, more than double the 247 deaths reported in the previous year and the highest since it began keeping track in 1998. Most are related to heat exposure.

The International Organization for Migration, which documents migrant deaths, alleges that the number of people who died attempting to cross the border in 2021 was actually more than 650.

CBP has not published a death tally for 2022.

Big rigs emerged as a popular smuggling method in the early 1990s amid a surge in U.S. border enforcement in San Diego and El Paso, Texas, which were then the busiest corridors for illegal crossings.

Prior to that, people paid small fees to mom-and-pop operators to get them across a largely unguarded border.

As crossings became exponentially more difficult after the 2001 terror attacks in the U.S., migrants were led through more dangerous terrain and paid thousands of dollars more to smugglers.

Ten migrants died in 2017 after being trapped inside a truck that was parked at a Walmart in San Antonio. In 2003, 19 migrants were found in a sweltering truck southeast of San Antonio.

Other incidents have occurred long before migrants reached the U.S. border. 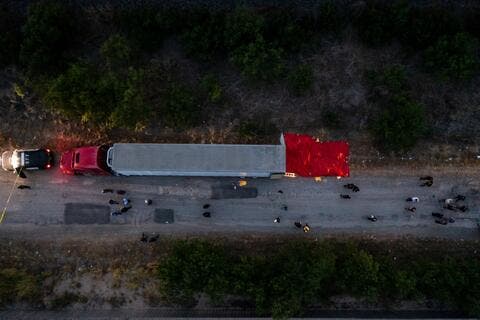 Last December, more than 50 died when a semitrailer filled with migrants rolled over on a highway in southern Mexico.

In October, Mexican authorities reported finding 652 migrants packed into six trailers near the U.S. border. They were stopped at a military checkpoint.