An ancient mausoleum with the largest illegal silversmithing site in Roman Britain has been discovered. 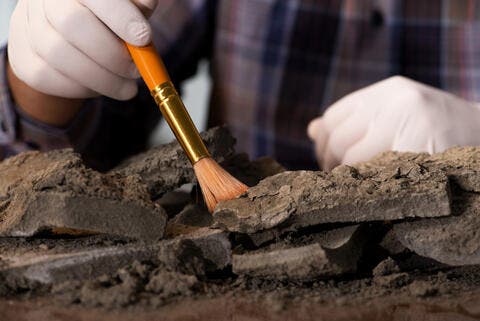 Archaeologists found a huge amount of litharge - a lead oxide and by-product of silver extraction - which suggests a clan was melting down metal to get at its precious material.

The 15 kilos of litharge discovered at Grange Farm, an excavation site in Gillingham, Kent, is the largest amount ever uncovered at a Roman Britain site.

Crikey this is in Gillingham in Kent where I grew up. Nice to see a bit of ancient British history discovered there.

The 15-year research project was triggered following excavations in 2005 and 2006, prior to a house-building.

The earliest evidence for occupation at Grange Farm occurs during the Late Iron Age, about 100BC, before the site grew into a small Roman rural settlement in the late first century AD, and the settlement evolved until the 5th Century AD when it was abandoned.

Metal extraction took place at one end of a building, with fireplaces in the middle, and at the other end high status domestic use.

Researchers say that it was likely a large clan who were also working the land, hunting, raising animals and metal working.

As the 3rd and 4th centuries in the Roman world operated on a gold and silver economy, the control of those metals was closely tied to imperial taxation.

This is why the investigators believe the silversmithing may have been done illicitly.

Dr James Gerrard, senior lecturer in Roman Archaeology at Newcastle University, said: 'Was that legal? Was that supervised?'

'Quite why people were refining silver from silver-rich base metal alloys is a mystery.

'Quite what the objects being melted down were is a mystery too.

'They probably weren't coins, as the bronze coinage had too little silver in it.

'We might expect that the refining of silver here was either being done officially by the 'Roman state', or perhaps illicitly. It's an unusual aspect to the site.

'Maybe they were making silver objects like the ingots in the Canterbury Treasure.'

The investigators also discovered a monument, which would have stood at almost the height of a two-storey house, proving the occupant was very high-status.

In the lead coffin, investigators found a middle-aged to elderly woman, who may have been a leader or chief of the clan.

Dr Gerrard said: 'The mausoleum is a house for the dead.

'It's basically a funerary monument. It probably dates back to the late 3rd Century or early 4th Century AD, and it was a stone building structure, probably with a tile roof.

'It was probably quite tall - certainly visible from the Medway - perhaps about the height of a two-storey house or a little less.

'It's quite unusual in that it had a tessellated pavement of plain mosaic - a plain red colour - which is really unusual for Roman Britain.

'This middle aged to elderly lady was buried there in a lead-lined coffin. She was probably local from the isotope analysis we did on the teeth.

'She had quite a hard life though. She had osteoarthritis but she lived to a good age and was buried with reverence. I think she was quite high status.. She was no peasant and she was someone with clout locally.'

Further evidence of wealth comes from gold jewellery found in the rubble of the mausoleum - including a necklace or bracelet made of gold filigree double-loop links threaded with polyhedral faceted beads of variscite.

Evidence of wear and modification suggests it may have been a necklace turned into a bracelet for a child, and it's not known if it would have come from the mausoleum itself or sarcophagi possibly located next to it.

Unusually, the mausoleum stayed intact until the 11th or 12th Century with the Anglo-Saxons left the ancient Roman structure alone.

But it was not unoccupied, as the researchers found the mausoleum had been taken over by owls.

Dr Gerrard said: 'We think during the 5th Century the grave is disturbed.

'We don't know why that was - and then the building stayed up until the Norman Conquest.'

'We've got tawny owl pellets. The building becomes ruinous and then you've got owls living here.

'It's the end of the Roman Empire, the mausoleum is abandoned and the owls take up residence - we can't be too precise about when that was but it would have been somewhere between the 5th and 10th Century.'

The researcher said he believes the monument was left alone by the Anglo-Saxons who may have used it as a navigational structure for people coming down the River Medway.

Dr Gerrard said: 'If the building is visible from the Medway it might be a navigational structure for people coming down the river.

'It's the 5th Century and water was more important as a means of travel.'

The mausoleum was moved after Domesday in 1086 when the land - recorded as having pasture, a tidal mill and six unfree peasants - was given to Bishop Odo of Bayeaux, half-brother of William the Conqueror.

Dr Gerrard said: 'The site then becomes the medieval manor.

'Probably what happened was they reused the stone from the building to build a chapel.'

At 1122, the manor was called Grenic, then Grenech in 1198, Grenge in the 14th Century, and more recently it became known simply as Grange Farm. 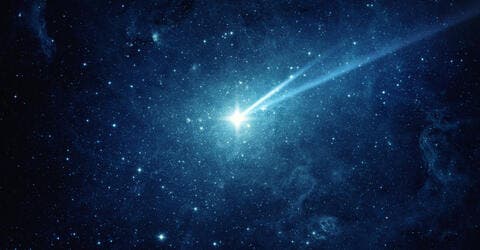 What is it Exactly? A New Type of 'FREAK STAR' Discovered

Dr Gerrard added: 'It's the end of a long process,' he said. 'I started my involvement in 2005 as a site assistant and digger on a short-term contract.. I was in my late 20s.

'It's 15 years later and I'm in my early 40s and I'm a senior lecturer at Newcastle University. It's been with me a long time - it's part of my career.. For all the other people in the report it's been a huge part of our lives..'