Published May 17th, 2021 - 07:18 GMT
Palestinian Children Are Being Traumatized. Stop The Bombing. STOP BOMBING OUR CHILDREN IN #GAZA (Instagram)
Highlights
“Art crosses all divides,” he said. 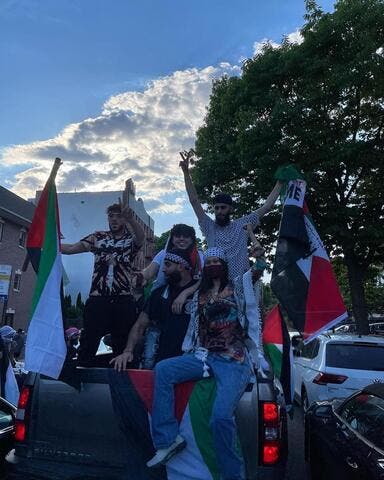 “Art in all of its forms represents a message. It is an expression of our thoughts, unity, solidarity and most importantly our rejection of the apartheid state of Israel,” 23-year-old Jordanian sketch artist Ayham Shammas told The Jordan Times on Saturday.

“Without the presence of social media platforms, the truth would not have come out the way it did, so as an artist or perhaps as a human being I have an instinctive urge to condemn the recurring violence, apartheid and persecution that are happening in Palestine,” Shammas said.

He said that with his recent sketch about Al Aqsa he only touched upon and gave a brief sight of the Palestinian issue, utilising the full potential of a black pen that helped him to create narratives and bring awareness of issues such as the Palestinian cause.

“I am using my Instagram to speak up about a great cause. The Palestinian cause! And it is unbelievable the extent of change a person can make by doing one simple act at a time. Art has helped people gain insight and understanding of the Palestinian struggle,” he added.

Art is “a pretty easy way” to send people one’s thoughts and concepts that cannot thoroughly be portrayed by words alone, according to Shammas who added that visual content now rules the social media landscape, such that a picture or an illustration may grab the attention of far greater numbers of people.

“Art crosses all divides,” he said.

Palestinian artist Zaid Ayasa from Jenin, whose artwork of the Dome of the Rock (Qubba Al Saakhra) went viral on social media platforms with his name being dropped from his own work, told The Jordan Times on Saturday that he still cannot find a suitable title for his now “very-known” artwork.

Ayasa, who is also a graphic designer and digital painter, is known for preserving the Palestinian symbols in his artworks that reflect specific concepts that examine the element of resistance that is used in real life.

The 2014 events in Gaza have greatly impacted his work in which he only used a combination of red, black and grey colours to reflect the unfortunate reality, according to the Palestinian artist who also plays the drums.

“The Palestinian symbols are things that are familiar to us and that we grew up with. They are also instruments that I, my father and grandfather used in our celebrations,” he noted, pointing out that art in Palestine, which represents the Palestinian resistance has begun with the Nakbeh (the Catastrophe).

Sharing the story behind his artwork, Ayasa said that “the silent Dome of the Rock turned into a person that is stressed, oppressed, filled with rage, imprisoned and cannot be reached by Palestinians from Jenin, Nablus or from elsewhere without a permit”, which only depicts a small part of the events happening in there. 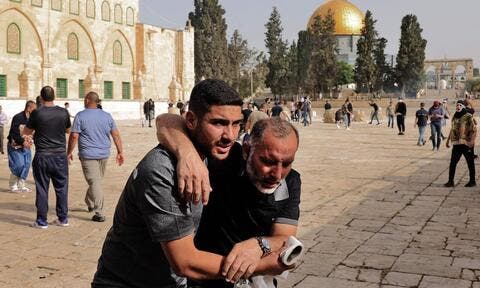 He said that his artwork is part of his “huge” Jerusalem art project.

Palestinian artist Bushra Rateb also posted on her Instagram account various artwork where she combines photos of bombing and destruction with pictures of children from Gaza with the caption “Palestinian children are being traumatised. Stop the bombing”.