Egypt’s Jon Stewart, Dr. Bassem Yousef on the Lessons of BLM for the Middle East

Published June 17th, 2020 - 02:13 GMT
Egyptian television program show host, comedian, art activist and surgeon Dr. Bassem Yousef
Highlights
One must accept when it comes to how people wish to express themselves without excluding non-veiled women, gays, lesbians, transsexuals, transgenders or atheists or people of different beliefs and convictions and chose to only empathize with Muslims.

In a 15 minute video talk shared on Facebook with his over four and a half million fans worldwide, Egyptian television program show host, comedian, art activist and surgeon Dr. Bassem Yousef, talked about why Arabs should not treat others as different or inferior as this is how they themselves are looked upon in the west.

Because the initial video created much controversy and had endless responses and arguments from spectators, Youssef, followed it with a three-part long video answering the different arguments people gave as to why certain freedoms should or should not be allowed.

Youssef asked his Arab audience to play musical chairs and put themselves in the shoes of those who in turn treat Arabs and Muslims as inferior or deserving of being persecuted. He argued that there are many differences that one must accept when it comes to how people wish to express themselves without excluding non-veiled women, gays, lesbians, transsexuals, transgenders or atheists or people of different beliefs and convictions and chose to only empathize with Muslims.

He said that "there are differences within the sub-sects in Christianity and Islam like Anglicans disagreeing with the Catholics and Orthodox and how much ISIS disapproves of the Muslim Brotherhood. Bottom line: an Arab cannot play God and decide who goes to heaven and who doesn't. And once you decide to exclude or punish others for being different, you are exactly like a militant playing Russian roulette."

Bassem Youssef; dubbed the Jon Stewart of the Arab World, hosted the popular TV show “A-Bernameg” – which was the first-of-its-kind political satire show in the Middle East. Originally airing as an online 5-minute-show in 2011, Al-Bernameg became the most watched show in the history of Egyptian TV with an average of 40 million viewers every week, in addition to over 2 million subscribers on its official YouTube channel and over 184 million views.

The first live audience show in the Middle East received wide acclaim around the world with coverage in some of the biggest media outlets, topping it off with Youssef’s appearance on the Daily Show with Jon Stewart several times, including Stewart's final show. Youssef and his team's bold criticism of the ruling regime throughout the seasons stirred a lot of controversy and led to over 100 complaints that were filed at the General Prosecutor’s office. After three seasons AlBernameg stopped airing in June 2014 due to pressure on both the show and the airing channel. 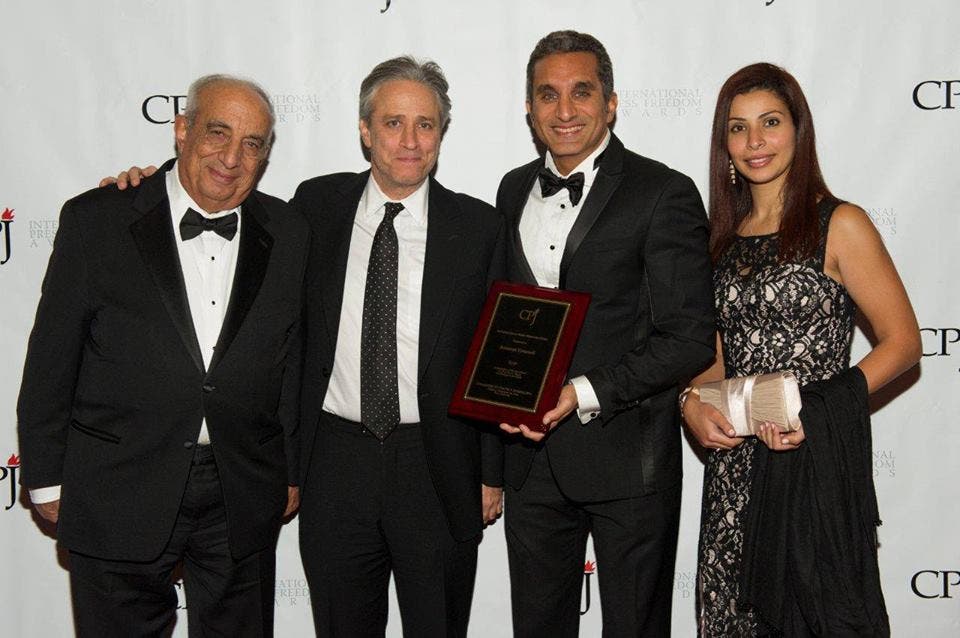 In 2013 Youssef was one of four recipients of the International Press Freedom Award by the Committee to Protect Journalists and in the same year he was named among Time Magazine’s most influential list for 2013 - under the “Pioneers” category. In the spring of 2015 Youssef served resident fellow at the Institute of Politics at the John F ‎Kennedy School of Government for one semester. ‎He has recently hosted the International Emmy Awards gala of 2015, as well as the 49th Carthage ‎Film Festival in Tunis.‎

Youssef majored in cardiothoracic surgery, passed the United States Medical License Exam (USMLE) and is a member of the Royal College of Surgeons (MRCS). He currently lives in California and runs comedy shows and documentaries from the U.S.