Published July 12th, 2020 - 10:35 GMT
Mahmoud Reda
Highlights
He is best known for co-founding the phenomenal Reda Group for Egyptian folklore dance, which was the first of its kind.

Legendary artist, choreographer and dancer Mahmoud Reda died at the age of 90, the Egyptian Actors’ Syndicate announced on Friday.

Reda, born on March 18, 1930, is the father of prominent Egyptian actress Shereen Reda. He is best known for co-founding the phenomenal Reda Group for Egyptian folklore dance, which was the first of its kind.

The deceased older brother, Ali, was a dancer and through his influence, Gene Kelly, and Fred Astaire films, he became interested in dance.

He originally trained as a gymnast and represented Egypt in the 1952 Summer Olympics in Helsinki. He attended Cairo University where he received a degree in Political Economics.

However, his main interest was dance and he joined an Argentinian dance troupe after graduating and toured Europe, while on tour in Paris he resolved to start his dance troupe back in Egypt, but due to lack of funds, he had to work as an accountant for Royal Dutch Shell.

Reda joined the Heliolido Club in Cairo, where he met Anglo-Egyptian Baladi dancer Farida Fahmy, who became his dancing partner. After the two performed in the Soviet Union in 1957, they decided to start a folk dancing troupe in Egypt with Ali. 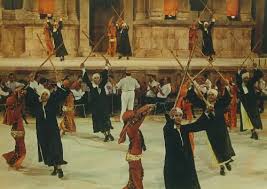 In 1955, he tied the knot to Farida Fahmy’s older sister Nadeeda Fahmy. She served as the costume designer for the Reda Troupe until her death in 1960.

The Reda brothers and Fahmy founded the state-sponsored Reda Troupe in 1959, which consisted of twelve dancers and twelve musicians.

The troupe began as a family affair. The Reda’s and the Fahmy’s were joint through marriage and their interest in dance, Egyptian tradition, and culture.

Mahmoud’s ambition to present a new genre of dance, and Farida’s strong desire to dance birthed a successful and fulfilling artistic enterprise.

Mahmoud was the lead dancer until 1972. He taught the dancers and choreographed and directed all stage performances while Farida Fahmy was the lead female dancer for twenty-five years. She was a role model for the recruited dancers, and her grace and elegance instantly captured the hearts of the Egyptians.

Reda created with his groundbreaking choreographers a genre of dance that embraced many styles, as his choreography combined traditional Egyptian folk dances with Western styles such as ballet.

He continued to teach dance workshops in Egypt and internationally, after his retirement.

Established in 1959, the group first performed onstage at Alazkabiya in 1959.  Reda’s signature choreography mixed elements of different folk dances from Egypt’s diverse landscapes, and with the support, later, of the Egyptian government, gained a strong national and international following.

In 1962, the Reda Troupe joined forces with Ali Ismael, who developed an orchestra counterpart and provided the musical score for their productions together.  The group would come to feature in Egyptian blockbuster films Ejazat Nusf Sana, Love in Karnak, and The Paper Thief, tour internationally in over 60 countries, collect multiple awards and perform on some of the world’s most prestigious stages: Royal Albert Hall, Carnegie Hall, Olympia, and the Stanislavsky theater.

Currently a collection of 24 dancers, 30 musicians and a 75 member chorus comprise the Reda Troupe, and under the direction of artist Ehab Hassan, continues to be Egypt’s premier folk group and an authority on oriental dance.