Published July 8th, 2021 - 06:33 GMT
Violin players hand detail during philharmonic orchestra performance (Shutterstock)
Highlights
“We still have at least one musician for almost every instrument, but the ensemble has been thinned out,” the young maestro told Arab News.

It’s hard, almost unimaginable, to find a Lebanese state or private institution not reeling under the burden of the country’s severe economic and financial collapse. 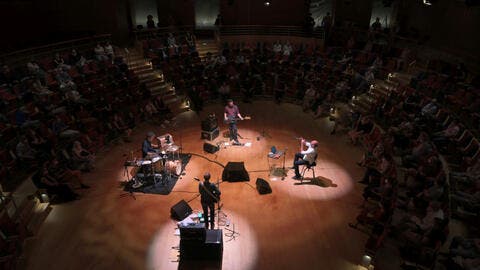 The Lebanese Philharmonic Orchestra, the only one of its kind in the small Mediterranean nation, is no different.

Founded in 1998 by the former President of the Lebanese National Higher Conservatory of Music Walid Gholmieh, the orchestra has found itself weaving through a crisis that the World Bank has said will possibly rank among the world’s three worst since the mid-nineteenth century.

The arts organization is one of Lebanon’s only state-sponsored cultural institutions with the ministry of culture paying the salaries of its members, while local and international donors contribute for anything from music stands to the purchase of instruments.

Its expenditures are part of the Ministry of Culture’s budget which has continued to drop over the years.

Over a 21-month period, Lebanon’s currency has lost more than 90 percent of its value, pushing more than 60 percent of the population below the poverty line as food insecurity soars and businesses shut down.

“Our biggest problem currently is financial and the struggle to retain our foreign musicians,” Lubnan Baalbaki, the permanent conductor of the orchestra, told Arab News.

Baalbaki, who hails from a family of artists, has been the chief conductor of the orchestra since 2012.

His father is a painter while his siblings have also left their mark on the world of music and art.

Now, however, he along with the other musicians that he leads, are facing an uphill battle.

“Their salaries, which are similar to local musicians, range now between $150 and 200$,” Baalbaki, who earned a Ph.D. in the ‘psychology of conducting’, said.

When first conceived, the orchestra was just composed of Lebanese, making it a chamber orchestra that was comprised of around 50 musicians. In order to fulfill his aspirations of turning it into a philharmonic orchestra, Gholmieh had to expand his horizons and attract foreign musicians skilled enough to play uncommon instruments like the trombone and double bass.

VIDEO: The Lebanese Philharmonic Orchestra rehearses in Baalbek after the famous summer festival was downsized to a single concert because of the coronavirus pandemic. The concert included music by composers ranging from Beethoven to Lebanon's Rahbani brothers pic.twitter.com/O7HJYqHcbK

“These instruments, such as the French horn, are only played by foreigners because we simply don’t have them in Lebanon,” he said.

“Unfortunately, foreign musicians are barred from working other jobs according to the employment law, unlike their Lebanese counterparts,” Baalbaki said.

Despite the financial distress, Lebanese musicians can play at private events, both locally and abroad, to secure additional sources of revenues, he explained.

As the crisis accelerated, several musicians have decided to seek pastures new, leaving behind an orchestra that has won accolades for its artistry, hosted countless international guest conductors and morphed into a national symbol of unison.

“We still have at least one musician for almost every instrument, but the ensemble has been thinned out,” the young maestro told Arab News.

The classically trained violin and lute player has also expressed concern about his musicians taking up other offers or abandoning the industry completely.

“Like school teachers, our musicians go on their summer break now and there’s a big concern that some of them will simply not report back,” Baalbaki said.

If that’s the case, the ensemble will find itself in a severe predicament, Walid Mousallem, the interim director of the Lebanese National Higher Conservatory of Music, told Arab News.

The Philharmonic Orchestra of Lebanon prepares for its concert at this years #baalbek festival, facing the glory of the past, the hardship of the present and the uncertainty of the future. #lebanon s great culture, they say, will never, never surrender. #lebanon pic.twitter.com/CgCFICsEFv

“Their monthly wages are barely enough to pay the rent of their homes,” Mousallem said, highlighting the importance of retaining European musicians in order to preserve the musical diversity of the ensemble.

“At the end of the day, a local musician can fall back on his family’s support, something that a foreigner cannot do,” Baalbaki added.

Before the first signs of the economic crisis began showing in late 2019, Lebanon was considered a cultural and financial hub that was able to draw skilled foreigners with higher salaries, housing and transportation benefits compared to their home countries.

But after coming for the money, they stayed for the country’s charm.

“A lot of them have a strong affinity for this country after being here for many years,” Baalbaki said.

Now, however, like many of the country’s disappointed youth, they are faced with the prospect of leaving Lebanon in search of a decent living.

“Without financial support, it’s hard to imagine that some of them won’t leave despite their love for Lebanon,” Mousalli said.

Before Lebanon’s house of cards came tumbling down in the immediate aftermath of mass protests that kicked off in late 2019, the orchestra was a staple ground within Lebanon’s once vibrant music scene.

Throughout any given season, which ran from September until July, the orchestra would play between 30 and 33 concerts that were mostly free to the public, Mousalli said.

These included breathtaking performances in the renowned Roman temples of the Bekaa in Baalbeck and in a 200-year-old Palace in Beiteddine, Chouf, among countless others.

But nationwide social unrest because of a broken banking system that wiped out life savings, rising food insecurity and soaring inflation made it almost impossible to arrange performances.

“Since September 2019 we’ve held around 10 or 11 concerts, including two this past June,” Mousalli said.

To make matters worse, the National Higher Conservatory of Music - which oversees the orchestra - has been without a permanent director since its former chief Bassam Saba died after contracting COVID-19 in December 2020.

In line with Lebanon’s power-sharing system, which distributes state positions among certain religious communities, the director of the conservatory must be a Christian Orthodox.

Almost seven months after Saba’s death, a new director has yet to be appointed as politicians wrangle over the top job.

“I’m not a Christian Orthodox so I can’t be the permanent director,” Mousalli said.

“Music is the last place where sectarianism should be involved,” Baalbaki added, noting the scarcity of qualified individuals that can take on this monumental role.

“We don’t have the luxury of picking from a pool of thousands of musicians from every sect. Lebanese musicians are already scarce,” he said, calling on policymakers to stop interfering in the affairs of the conservatory.

Without a permanent director, key decisions to safeguard the orchestra cannot be taken, according to Baalbaki.

Despite these almost insuperable obstacles and nonexistent governmental support, both men remain hopeful in benefactors recognizing their plight.

“We’re under threat yet fighting tooth and nail to safeguard the orchestra and the conservatory, as losing them would be a tremendous loss to Lebanon and its culture,” Mousalli said. 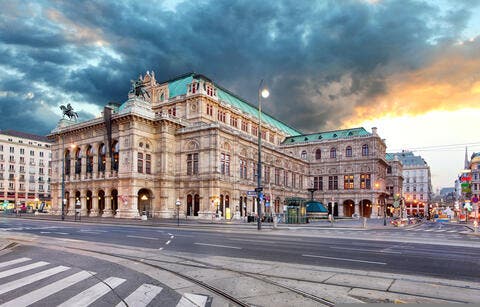 The conservatory is currently in talks with the European Union and foreign ambassadors in a bid to shore up financial support, the scholar, who holds a Ph.D. in political philosophy, said.

“Can you imagine that a country like Lebanon doesn’t have one single national theatre?” Baalbaki finally pointed out in disbelief