Published May 3rd, 2022 - 05:59 GMT
A man hires pushes kids on a swing in Tarlabasi at Beyoglu during the first day of Eid al-Fitr, which marks the end of the holy month of Ramadan in Istanbul, on May 2, 2022. (Photo by BULENT KILIC / AFP)
Highlights
The 3-day celebration begins with large family festivities, mass prayers.

Eid Al-Fitr, the holiday marking the end of the Muslim holy month of Ramadan, is being celebrated worldwide on Monday. 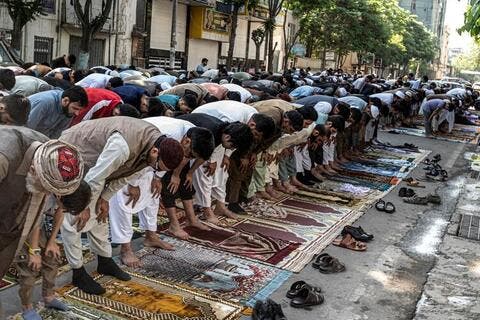 Traditionally, Eid is a three-day celebration marked by large family festivities and prayers.

People across Turkiye celebrated the first day of the holiday with many mosques packed for Eid Al-Fitr prayers early in the morning and people hosting friends and families at their homes.

Doug and I send our warmest wishes to all who are celebrating Eid al-Fitr. Muslims in the U.S. and around the world celebrate after a month of deep reflection, helping those in need, and connecting with community. From our family to yours, Eid Mubarak! pic.twitter.com/BjYbqbDv1I

The holiday has brought joy, particularly to children, who receive candies and presents as part of the tradition.

Families also visited the graves of their loved ones. Also, many people chose to travel to their hometowns or coastal cities for vacations.

In the Turkish Republic of Northern Cyprus (TRNC), citizens filled the mosques for the Eid Al-Fitr prayer. Eid prayers were held in Hala Sultan Mosque in the capital Lefkosa and all mosques across the country.

Mosques in Russia’s capital Moscow were full and thousands of Muslims had to perform Eid prayers on the streets. Some subway stations and streets around the mosques were temporarily closed due to crowds.

Eid Al-Fitr prayers were also held in the Azerbaijani capital Baku and other cities. People who could not find a place in mosques offered prayers in courtyards and gardens.

Muslims in the Swedish capital Stockholm performed the prayer at Fittja Mosque. In the Berdeng region of Stockholm, Muslims prayed on the football field due to the heavy crowd.

In Germany, worshipers filled the Cologne Central Mosque and its courtyard, with many some performing the Eid prayers on the sidewalks.

The roads leading to the Old City area of occupied East Jerusalem were filled with young, old, women, men, and children who wanted to go to Al-Aqsa Mosque.

The first hours of the Ramadan feast in Jerusalem started with a festive atmosphere. 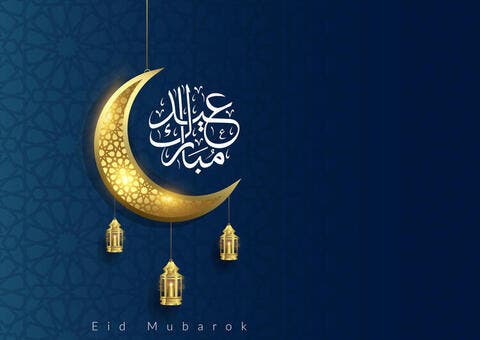 Thousands of Muslims living in the countries flocked to mosques in the morning to perform the Eid prayer and celebrated with their loved ones.