Published May 16th, 2021 - 08:09 GMT
Close-up pictures of the traditional pottery making in the old way (Shutterstock)
Highlights
The first is the choosing of appropriate clay, the main material, which is then cleaned and formed.

Al-Ahsa’s pottery markets and factories, which have operated for centuries, see a surge in business during the holy month of Ramadan. 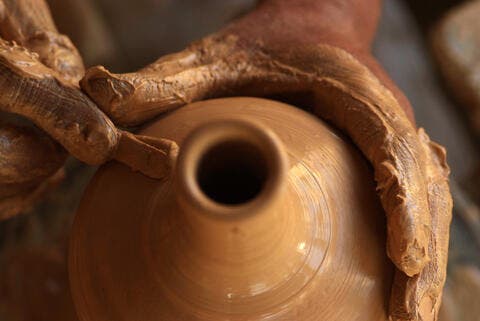 Nostalgic Saudis Wants to Revive The Ancient Art of Pottery

Many Saudis buy pottery products to prepare and decorate their Ramadan and Eid tables, as part of local customs and traditions.

Pottery vessels have a range of shapes and uses, including utensil and food containers, pots for preserving and cooling water, and antiques for decorating tables, including incense burners, vases and piggy banks. These are considered part of local heritage and folklore across the Kingdom.

Among the most prominent pottery site in Al-Ahsa is Dogha Al-Gharash, located west of Al-Qarah Mountain. This factory was founded more than 150 years ago and has become one of the main tourist and heritage sites in the region.

The chief craftsman in Al-Ahsa, Wassil Ali Al-Gharash, who supervises the factory, said that the pottery market during Ramadan sees “remarkable activity” in terms of manufacturing and sales.

“This is because of its uses and forms that overlap and suit Ramadan and Eid tables, in addition to the special aesthetic atmosphere that pottery adds, bringing back memories of past decades,” he added.

Al-Gharash said that pottery, a technique that has been honed for millennia in the Arabian Gulf, involves several steps. The first is the choosing of appropriate clay, the main material, which is then cleaned and formed.

Clay is then used to shape a vessel by hand or through molds and pottery wheels. The shaped clay is then left in a suitable place to dry. In the final step, the shaped clay is cooked in special ovens, thus becoming a high-quality product ready for sale and use.

Al-Gharash said that pottery is an art that requires patience, accuracy, skill and an experienced hand with a special touch.

Hand Crafted & Carved Saudi Pottery. These one of a kind pieces are inspired by the Al-Qatt Al-Aseeri Art from Southern Saudi Arabia, which is distinguished by many geometric patterns, colors, & lines. The ceramics are handmade in Riyadh. https://t.co/7gnGgviIiFخزف-و-سيراميك pic.twitter.com/Jt2firD0V4

Hassan Ali Al-Shomali, a young pottery maker, said that clay used in pottery vessels is sourced from Al-Qarah Mountain and its surroundings, and is of three types: Red, green and yellow, all of which are mixed in certain proportions with water to form a paste.

He added that pottery has preserved its place in households due to its many advantages, including low costs and its ability to bear heat when used to cook foods. 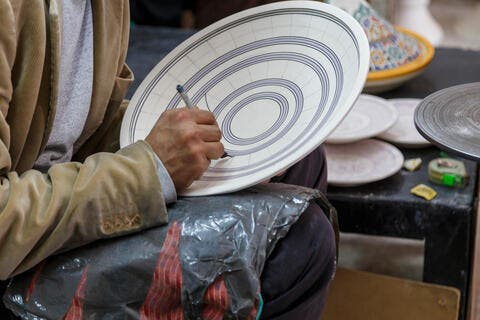 The pottery industry remains one of the most important parts of Al-Ahsa’s allure. A segment of the local community has managed to maintain a robust handmade pottery market despite modern developments in manufacturing and production.

Pottery producers also receive the attention and care of authorities concerned with preserving heritage, legacies, and social traditions as well as supporting professions and folk crafts.