Years of Struggle: The Women's Movement in Jordan by Rana Husseini

Published August 9th, 2021 - 06:35 GMT
Years of Struggle: The women's movement in Jordan by Rana Husseini
Highlights
The research for this book made me feel very proud with where we are today despite the gaps and work that still needs to be done, Rana writes in her book. 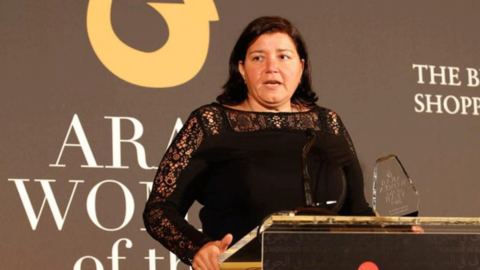 Where is Jordan in the Fight of Crime against Women? Activist and Writer Rana Husseini Tells the Whole Story.

"For the women and men of this country who dedicated their lives to fight for justice, equality and real freedom," with this dedication Rana Husseini, the author, journalist and women's rights activist starts her new book Years of Struggle: The Women's Movement in Jordan. Supported by Friedrich-Ebert-Stiftung / Jordan Office, this is Rana's second book after Murder in the Name of Honor.

The eleven chapter book, whose PDF version is already made available on FES site, covers the different stages of the history of the Jordanian Women’s Movement from the forties to the nineties, the activism, achievements and the "impact of the so-called Arab Spring," the Jordanian constitution and international laws, the fight about ‘Honor,’ the discriminatory laws’ fight, the political and labor scene in Jordan, the impact of the educational system on women’s lives in Jordan, empowering women with disabilities, the Syrian refugees crisis, Article 1325, lessons learned and next steps recommendations.

I truly believe that understanding our history, political developments as well as the sacrifices made by many over the years is crucial for anyone who wants to learn more about the history of the people of this country and how things moved forward or backward. Rana writes

Rana Husseini is a human rights’ activist and the author of the book “Murder in the Name of Honor”. She is also a senior reporter at The Jordan Times. Husseini focused on social issues for over 25 years with a special emphasis on violence against women, as well as the brutal crimes that are committed against Jordanian women in the name of family honor. Her coverage of, and dedication to, ending this unjustified practice against women helped raise national awareness on a topic that is traditionally considered taboo.

The government responded by introducing legal and judicial changes that suggest tougher punishments for perpetrators of such crimes as well as introducing new services to help abused women and children. In 2009, Husseini Ninished writing her book on so-called honor crimes in the world, with special emphasis on Jordan.

Her book, which was translated to English, Arabic, Dutch, and Finnish, focused on providing people with a credible source based on real-life experiences and tackling a sensitive issue which is often susceptible to misconception.

Murdered women: A history of ‘honour’ crimes https://t.co/sY5GHTJw92 via @AJEnglish

Husseini has earned 10 local and international awards, including a medal from HM King Abdullah II in 2007, the Reebok Human Rights Award in 1998 for reporting on such crimes and The London Arabia Organization Arab Woman of the Year Award in 2019 for social impact.

Husseini is currently serving on several boards including the Advisory Board of Equality Now Organization that is based in the United States, and the Jordanian National Committee for Demining and Rehabilitation. She is also a founding member of a newly established women’s group in Jordan that is called Jordanian Feminist Action, a collective of Jordanian women activists.

The research for this book made me feel very proud with where we are today despite the gaps and work that still needs to be done, Rana writes in her book.

The Friedrich-Ebert-Stiftung (FES) is the oldest political foundation in Germany with a rich tradition in social democracy dating back to its foundation in 1925. The foundation owes its formation and its mission to the political legacy of its namesake Friedrich Ebert, the first democratically elected German President.

The work of our political foundation focuses on the core ideas and values of social democracy – freedom, justice and solidarity. The activities of FES Amman aim at promoting democracy and political participation, supporting progress towards social justice and gender equality as well as at contributing to ecological sustainability and peace and security in the region. FES Amman supports the building and strengthening of civil society and public institutions in Jordan and Iraq.