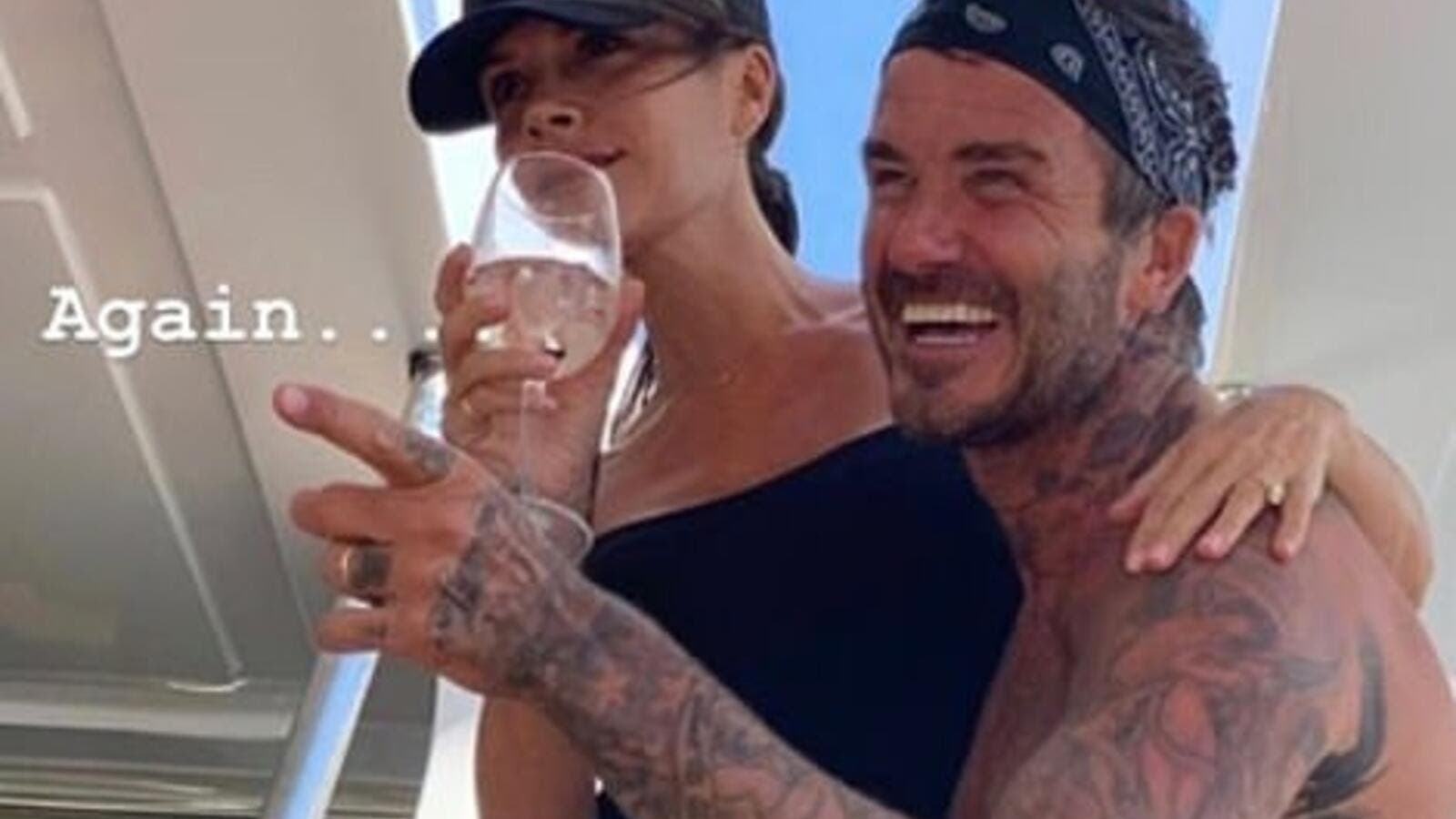 They have been enjoying time together as a family during a luxurious holiday in Italy.

And David and Victoria Beckham looked happier than ever as they cosied up to one another on board a yacht and continued documenting their idyllic trip to Puglia on Thursday.

The fashion designer, 45, posed with a wine glass in hand as she perched on David's knee. Smiling, she had one arm around the shoulders of her husband of 20 years, who was captured laughing animatedly.

The former Spice Girls singer looked effortlessly chic in a black swimsuit with a pair of ripped denim hot pants for the trip and opted to cover her brunette locks with a black baseball cap.

Looking equally ready for a day at sea, David, 44, displayed his intricate inkings as he sported a pair of dragon-printed swim shorts and a black bandana.

Captioning the shot, Victoria cheekily wrote: 'Again... Who knew I was so funny?!?!x'.

Former footballer David posted a slew of snaps to his Instagram Stories, showing more glimpses of their breathtaking trip and their yacht outing, including one of him looking adoringly at their daughter Harper, eight.

Smiling at one another, David sported a pair of shades and a straw fedora with feather detailing around the rim.

The couple's youngest child looked sweet in an orange swimsuit before she was captured parasailing alongside David and her brother Romeo, 16.

In the video, the trio can be seen getting harnessed in and slowly ascending into the air, although Harper looks a little nervous.

As Harper is being reassured by David, Victoria can be heard encouraging her as she tried out the activity. The words of support clearly worked as the youngest beamed when they landed on the boat and shared how 'fun' it was.

Her brothers Brooklyn, 20, and Cruz, 14, were also captured by their sports star father harnessed to the parachute with the jaw-dropping Italian scenery behind them.

Captioning the animated shot, David wrote: 'And they are off' before sharing a slew of clips of him trying his hand at wakeboarding. He joked that he'd have a 'sore back in the morning'.

The family also indulged in some relaxing morning yoga as they made the most of every minute of their break to the south-eastern tip of Italy.

In the clips, David captured Victoria performing a headstand alongside their children. Despite initially moaning he was 'useless at yoga', the sports star was seen successfully holding the pose without assistance.

Aside from their action-packed day, Victoria shared a number of candid shots of an elated David with their children; Brooklyn, Romeo, Cruz and Harper.

During their day out at sea, the family were able to take in Puglia's famed Adriatic beaches and gorgeous seaside villages. The south-eastern region is home to the longest stretch of coastline in Italy.

Aside from the region's renowned sights and sounds, Puglia is also known for its cuisine, especially its wine and seafood, which the Beckhams are no doubt enjoying.  It's also where much of Italy’s olive oil is produced.

The family's candid snaps come amid reports that Brooklyn and his model girlfriend Hana Cross have split.

Brooklyn and Hana haven't been spotted in public together since their last outing at Wimbledon on July 14, and the model, 21, appears not to have been invited on the Beckham family's holiday in Italy.

An insider told MailOnline the pair have called it quits after eight months of dating, in the wake of a string of explosive public rows.

Hana has been noticeably absent from the Beckham brood's social media activity this summer, despite having joined Brooklyn for family engagements with parents David and Victoria in the past.

The brunette beauty has been by his side at every major social occasion in 2019 until now, from the Cannes Film Festival to Victoria's Fashion Week presentation.

While the pair still follow one another on Instagram, Brooklyn hasn't liked any of her pictures since the end of July - and neither have his family.

In June, it was claimed David had told his son Brooklyn to distance himself from his girlfriend following a slew of public arguments between the pair.

The football star is said to have asked his son to get some space from Hana because of their constant bickering. The latest major row took place at the Cannes Film Festival in May.

A source told The Sun newspaper: 'David's got a tight bond with Brooklyn and it's been worrying for him and Victoria to watch him arguing with Hana.

'They've been so up and down these past few weeks and David wants Brooklyn to have a serious think about whether he's got a future with her.'

Brooklyn began dating Hana in December but, since then, they have split numerous times and hit the headlines thanks to their tumultuous relationship.

Security guards were reportedly forced to separate them after she 'lashed out' at him at Cannes.

They were said to be enjoying a champagne-filled lunch at the lavish Hotel Martinez in the French resort when the argument broke out.

During the boozy lunch at the hotel, Hana is believed to have challenged Brooklyn, which led to them both 'screaming and crying' during another public spat.

An insider close to Hana told the publication: 'They had had a couple of drinks and started trading insults. They are both still young, so of course everything is very impassioned at that age.'

The speculation comes a day after Victoria treated  Harper to a luxurious 'mummy-daughter' spa day on Wednesday.

Taking to Instagram, the fashionista shared a clip of Harper getting her feet massaged during a reflexology session.

Harper looked thoroughly relaxed with her head back in her hands as the therapist kneaded her feet, which were undoubtedly sore from Tuesday's pony trek.

Reflexology is an alternative medicine involving application of pressure to the feet and hands with specific thumb, finger, and hand techniques without the use of oil or lotion.

The youngest Beckham was back at the stables during the famous family's holiday on Tuesday, showcasing her enthusiasm for horses by picking a pony's hoof for stones.

Doting dad David took to his Instagram account to share some snaps of the youngster hard at work, including one of her plaiting her four-legged friend's mane.

Harper was dressed for the occasion in a white T-shirt, jodhpurs and boots as she tackled her 'jobs for the day'.

Retired footballer David later enjoyed a bike ride with son Cruz, taking to the cycling paths for some quality time together. 'Special time with Cruzie', the father-of-four captioned one snap.

Earlier this week, the former Spice Girl took to her Instagram Story to share a short clip of Harper as she showcased her equestrian skills around a paddock.

Harper displayed her flair for the sport as she confidently cantered around the training ground while Victoria proudly watched on.

In the clip, the youngster could be seen clutching onto the reins of her horse as she donned a helmet, riding boots and a crop for the outing. Captioning the short video, the fashion designer wrote: "We love u Harper x".

In another photo, Victoria captured Harper sweetly petting a grey stallion as she visited the horses in the Italian stables following her session.

David has also been sharing a slew of snaps from his glorious family Italian getaway.  The former footballer was seen kissing Harper on the cheek, while in another snap his wife Victoria showed off her style credentials as she relaxed in the sunshine.