Diplo's Ex Sues Him For Sexual Battery And Assault

Published June 27th, 2021 - 10:50 GMT
The allegations made by Diplo strongly resemble those made by Shelly in her filing.
Highlights
Diplo's ex, Shelly Auguste, has filed a lawsuit against the DJ for allegedly failing to inform her that he had an STI before they were intimate and pursing her as a minor

Diplo's ex, Shelly Auguste, has filed a lawsuit against the DJ, which accuses him of sexual battery, assault, defamation and fraud.

In new legal documents, obtained by TMZ, Auguste claims the 42-year-old performer first contacted her on Twitter when she was just 17 and 'solicited nude photos of her.'

They went on to exchange 'explicit' images 'before meeting in person for the first time in 2018, when she was 21.'

She went on to state that after she moved to Los Angeles 'Diplo really began pressuring her for sex by sending unsolicited graphic photos of himself in sexual situations.'

The court documents also alleged that after Auguste confronted Diplo about the rumors he had herpes, he 'cut off all communication' with her.

But after they reconciled, a year later, in 2019, she claims 'she gave in to the pressure and lost her virginity to Diplo.' 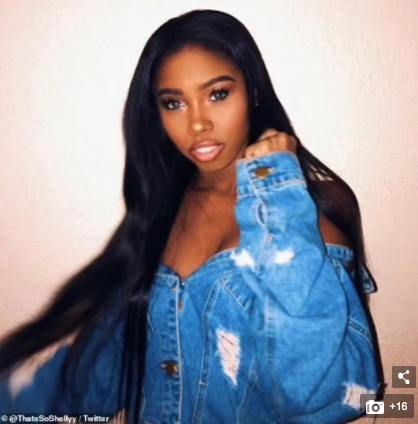 Not long after, she says she 'was diagnosed with chlamydia' and 'believes she got it from Diplo because she says he was her only sexual partner at the time.' 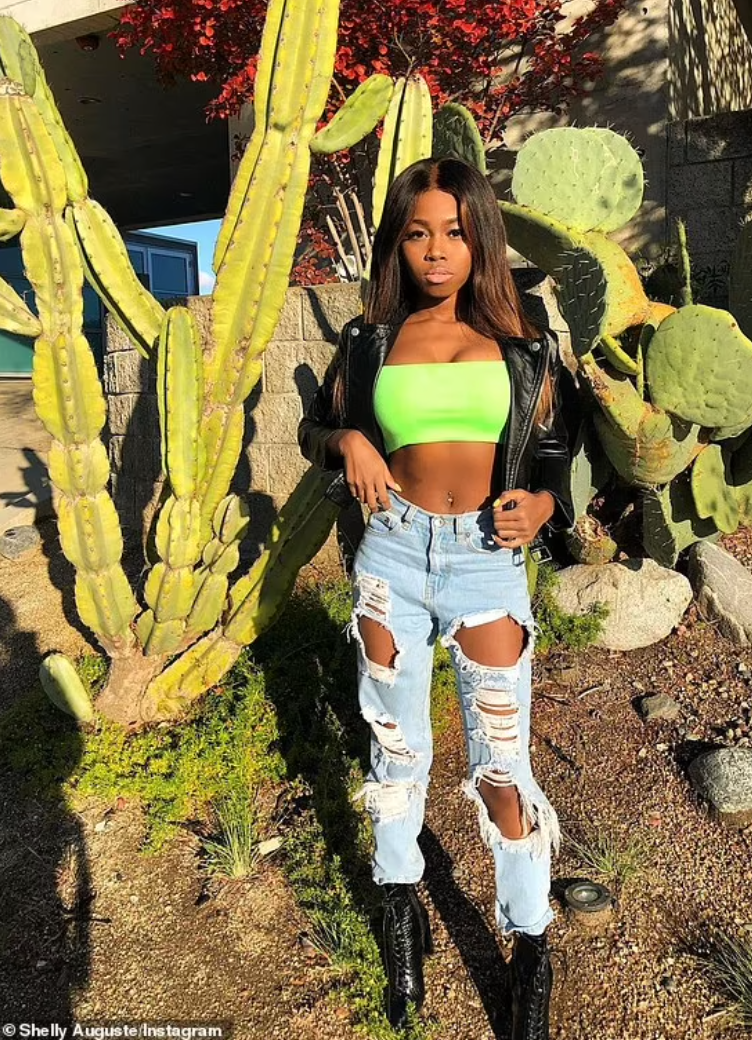 'As has already been made clear in the restraining order we obtained against this individual, she has repeatedly stalked, defamed, threatened and attempted to shake down [Diplo] and his family,' Freedman told the outlet.

Freedman continued: 'These latest false claims are just part of that ongoing campaign of harassment, and we will not allow them to deter us from pursuing justice against her to the fullest extent possible under the law.'

In December, Diplo requested a judge sign a temporary restraining order (TRO) against Auguste, citing incessant harassment of him and his family, TMZ reported.

Diplo also claims his accuser has been publishing nude images of him across social media, in addition to sending them some of his ex-lovers, including the mother of his children, Kathryn Lockhart.

The move came just over three weeks after his accuser, identified as 'Shelly', alleged that Diplo - real name Thomas Wesley Pentz - had 'groomed' her and filmed her engaging in sexual activity without her permission.

The woman first published the accusations on Twitter in October. Shortly afterwards, a nude image of her appeared on the site that was published by a user she believes was acting on behalf of the DJ in an attempt to 'humiliate' and silence her. 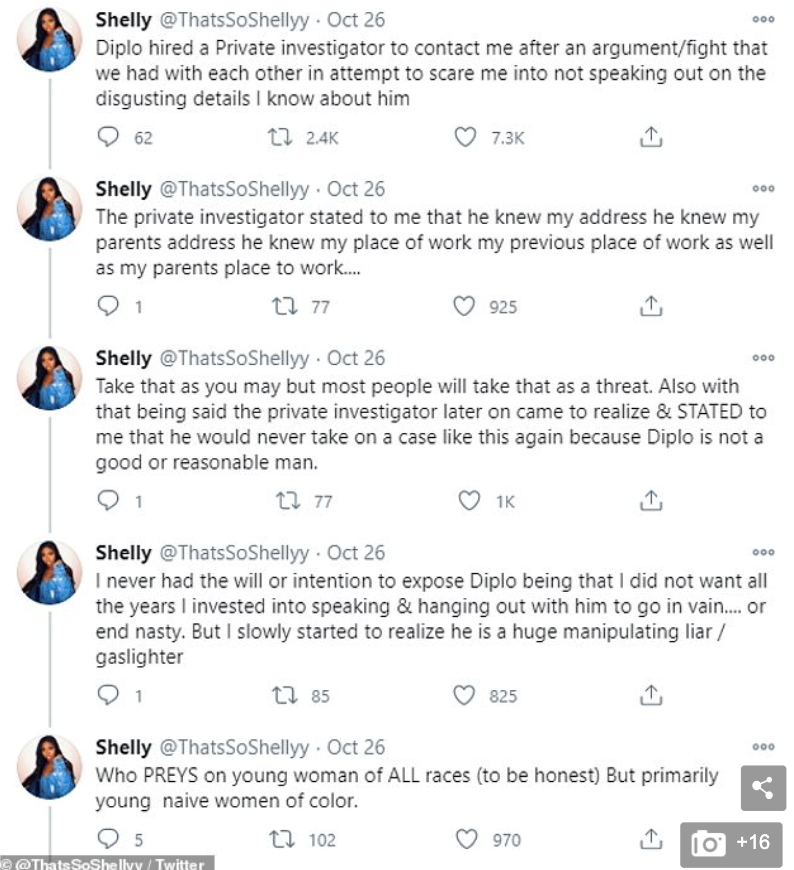 Through his attorney, Diplo denied the allegations to DailyMail.com at the time, before hitting back with his own filing.

The performer also claimed Shelly began circulating videos of him with other women that Diplo claims he'd sent to her.

He also claims Shelly has been routinely harassing and stalking him, and asked a judge to approve the restraining order to prevent her from allegedly leaking any further compromising footage of him.

The DJ's attorney, Bryan Freedman, told DailyMail.com: 'Unfortunately, in spite of repeated requests to stop, this individual has continued to stalk and harass my client and his family for more than a year.

'As a result, we have asked the Court to grant a restraining order against her and to continue this case so that this troubling situation can be resolved once and for all,' he continued.

The allegations made by Diplo strongly resemble those made by Shelly in her filing.

Attorney Lisa Bloom, who represents his accuser, told The Daily Beast: 'We are pleased to announce that by an order dated November 16, 2020, the Court ordered our requests 'all granted' and the restraining order issued.'

In response to the nude image of Shelly that was reportedly posted to Twitter, Bloom said: 'The only person that had that picture other than her was [Diplo],' adding that they think the photo came from a 'front account and a fake account' operated by Diplo or someone acting under his direction.

The attorney also claimed that she has spoken to three other women with similar allegations against Diplo.

Shelly had previously accused Diplo of 'preying' on her after the two first made contact when she was 17-years-old and he was 36.

Court papers state: 'Respondent messaged me on Twitter. I was shocked and excited because Respondent is a well-known DJ, record producer, and songwriter.

'After communicating via Twitter, we exchanged phone numbers and Snapchat usernames. I was 17 years old when we met and Respondent was 36 years old.'

They did not meet until March of 2018 but 'regularly exchanged sexually explicit photos, videos, and messages', according to the filing. They are said to have had sex for the first time time April 2019.

In her original filing, the woman adds: 'I was caught off guard and shocked when Respondent sent me unsolicited videos of him engaging in sex with other females in or about October of 2018. 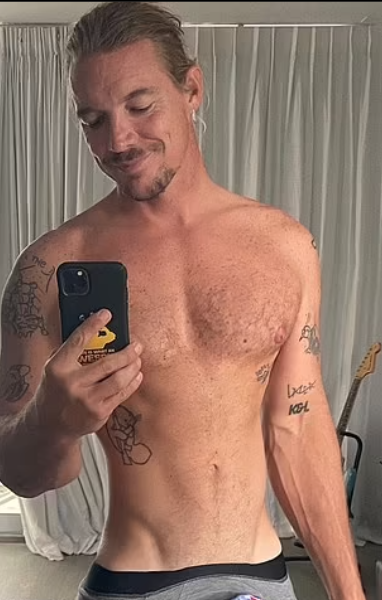 'I sternly told Respondent that I did not want him to ever record us engaging in sexual activities.'

After claiming to have been contacted by a private investigator hired by the DJ the woman says she felt 'threatened and intimidated'.

In her Twitter thread on October 26, Shelly alleged that Diplo took explicit footage of her without her consent, writing: 'I SPECIFICALLY asked him not too & his reply was 'f*** it. I'm recording this.''

She also claimed he hired a private investigator to contact her after they got in an argument - saying that he wanted to 'scare' her so she wouldn't share the 'disgusting details' she knew about him.

In another tweet Shelly wrote: 'I never had the will or intention to expose Diplo being that I did not want all the years I invested into speaking & hanging out with him to go in vain….or end nasty.

'But I slowly started to realize he is a huge manipulating liar / gaslighter who PREYS young women of ALL races (to be honest) but primarily young naive women of color.' 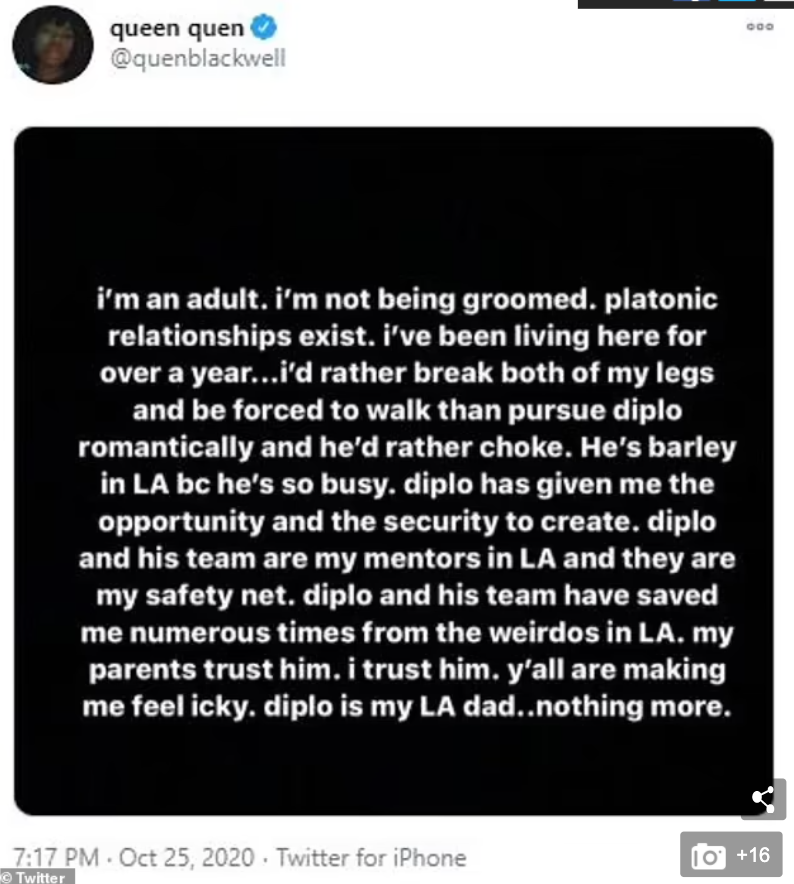 Shelly's Twitter thread alleged misconduct by Diplo came as he was hit with backlash over his relationship with 19-year-old TikTok star Quenlin Blackwell.

Blackwell announced that she was living with the artist 23 years her senior in a video that went viral as critics remarked that he is way too old for her.

She defended herself by saying that Diplo was more of a father figure to her than a romantic pursuit - as he insisted that they are only friends.