Yesterday evening, the art scene has witnessed an exchange of sharp tweets between Nancy Ajram and Elissa, with an interference from Myriam Fares.

The channel presented a report highlighting Elissa's achievements along the way.

However, the show’s host "Jean Nakhoul", who happens to be Elissa’s close friend, shared a new report on another show on MTV Lebanon, highlighting the most influential music videos in the Arab world.

Various clips by many artists were mentioned, such as Elissa, Nawal El-Zoghbi, Najwa Karam and Nancy Ajram, but Nancy's clips were highlighted superficially.

Nancy Ajram was furious after the two incidents, so she decided to respond throughout her official Twitter account.

In another tweet Ajram continued: "If it's about songs, clips, concerts, hits, or outfits ... and even numbers, the story only needs a calculator," concluding her statements: "Happy day .. full of credibility." 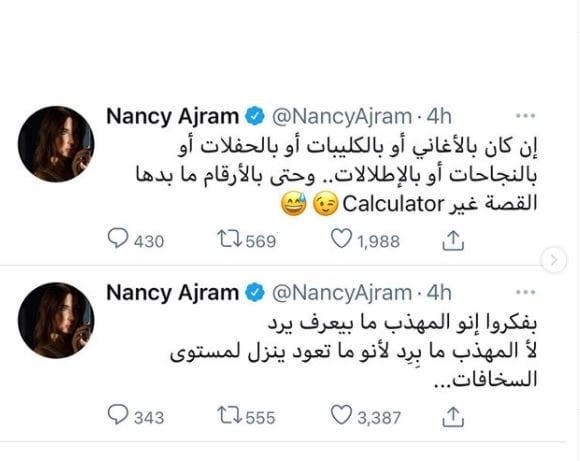 Nancy aimed her tweets at presenter Jean Nakhoul, but Elissa's fans thought that Nancy was aiming at Elissa herself, so they started attacking Ajram.

Later on, Elissa liked a tweet that said that her album "Bastannak" surpassed Nancy's album "Ya Tabtab".

As for Myriam Fares, she supported Nancy by tweeting: "My dear Nancy, unfortunately we are in Lebanon, the smell of corruption, hypocrisy and favoritism smells everywhere."

At this point, Elissa wanted to put an end to the controversy explaining what happened, so she tweeted: "Let me settle the controversy. Nancy, Haifa, Najwa, Nawal and I are all stars, and we are all competing with numbers and projects, and this is an honest competition and an evidence to a healthy artistic community. We are in a situation where we supposedly need to support each other in such circumstances, and plant love and a sweet word, unlike some intruders who create sedition. "

She continued: "Nancy’s tweets could be misunderstood, or she could be annoyed about a certain topic, but this does not prevent Nancy Ajram of being a big star, and we will continue to compete so that I can beat her or she beats me, because this is the honorable competition." 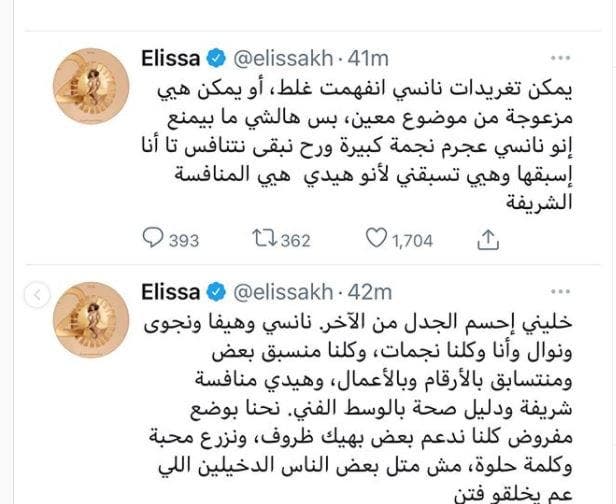 Elissa’s statements were considered as an insult to Myriam Fares because of the word "intruders," while Nancy, in turn, ignored Elissa's tweets and did not comment on them.

'Don't You Like What I Sing?' Elissa WITTINGLY Responds to a Critical Fan at Her Canada Concert (Video)
Tags:Myriam FaresElissaNancy AjramCelebrities FeudLebanon