George Segal, the Oscar-nominated actor who sparred with Richard Burton in Who's Afraid of Virginia Woolf, romanced Glenda Jackson in A Touch of Class and won laughs in the TV sitcom The Goldbergs, has died at the age of 87, his wife Sonia said on Tuesday.

'The family is devastated to announce that this morning George Segal passed away due to complications from bypass surgery,' Sonia Segal said in a statement to entertainment outlets Variety and Deadline Hollywood.

Charming and witty, Segal excelled in dramatic and comedic roles and had a life-long passion for the banjo.

Segal's acting career began on the New York stage and television in the early 1960s.

He quickly moved into films, playing an artist in the star-studded ensemble drama Ship of Fools and a scheming, wily American corporal in a World War Two prisoner-of-war camp in King Rat in 1965.

A native of Great Neck, New York, Segal's most famous role was in a harrowing 1966 drama, Who's Afraid of Virginia Woolf. 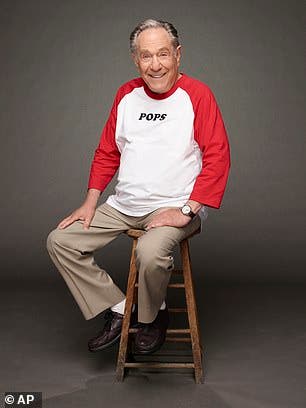 The entire cast of the film, based on Edward Albee's acclaimed play, was nominated for Academy Awards: Elizabeth Taylor and Burton for starring roles, Sandy Dennis and Segal for supporting performances. The women won Oscars, the men did not.

'Elizabeth and Richard were the king and queen of the world at that moment and there was a lot of buzz about it,' Segal told The Daily Beast in 2016.

'For me, there was a great satisfaction of being involved with it.'

To younger audiences, he was better known for playing magazine publisher Jack Gallo on the long-running NBC series Just Shoot Me from 1997 to 2003, and as grandfather Albert 'Pops' Solomon on The Goldbergs since 2013.

It was in comedies that Segal cemented his star status in a string of films in the 1970s with A-list directors and co-stars such as Jackson, who won an Oscar for her performance in A Touch of Class.

Segal played a lawyer in the 1970 dark comedy Where's Poppa with Ruth Gordon, a gem thief along with Robert Redford in 1972's The Hot Rock, an out-of-control gambler in Robert Altman's California Split and a philandering Beverly Hills divorce attorney in Paul Mazursky's Blume in Love in 1973.

He starred opposite Jane Fonda in Fun with Dick and Jane, fell for the charms of Barbra Streisand in The Owl and the Pussycat and played Natalie Wood's husband in The Last Married Couple in America.

'I always try to find the humor and the irony in whatever character I am playing because I think of myself as a comedic actor,' Segal said in an interview with the online movie journal filmtalk.org in 2016.