On His 35 Birthday! This is Why Kerem Bürsin and Hande Erçel Split up

While the very famous Turkish actor, Kerem Bürsin, celebrated his birthday as he turned 35 on Saturday; a Turkish reporter revealed the real reason behind his split up with Hande Erçel. 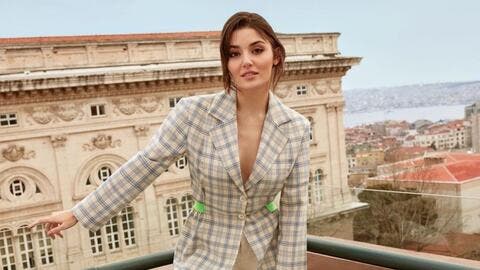 Hande Erçel Takes This Decision After Breaking up with Kerem Bürsin

The star of Sen Çal Kapimi or 'You Knock on My Door' Turkish series, in which he participated with actress and model Hande Erçel, said earlier to want to celebrate his special day at home along with his pet 'Hector' and away from any enormous celebrations or huge parties that celebrities usually do on their birthdays.

The humbleness of this man 🤍 he thinks its too much but i think he deserves all the love in the world and a little bit more 🤏🏻#TheBürsinBirthday pic.twitter.com/gwRFBWLvlT

"I will not do anything special. I will be at home with my dog ​​like a normal day," Kerem Bürsin explained in an interview with a Turkish medium according to the Spanish-language magazine Hola.

Bürsin shared and reposted the many many birthday wishes he received from other celebrities and fans who also donated in his name to mark the Turkish actor's 35 birthday.

Lipton Ice Tea Turkey, where Kerem is the commercial face of the brand, has also shared a video marking Bürsin's birthday.

Maya Başol who played his daughter in 'You Knock on My Door' series, and Elçin Afacan have also shared Instagram stories along with the Bürsin marking his 35 birthday.

A Turkish journalist shared yesterday the real reason behind Kerem Bürsin and Hande Erçel's split claiming that Bürsin cheated on the model with a girl outside the artistic community and that Hande broke up with him when she knew.

The couple, nicknamed Hanker by the fans, announced the start of their relationship while filming the Turkish Love Is in the Air T.V. series. They broke up 18 months later. However, the exact reason behind their split up remained unknown, despite the many theories shared by the fans, before this reporter spilled the rumor.