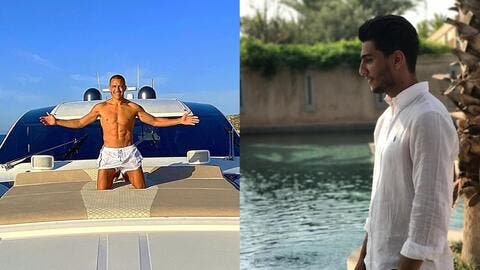 Taylor shared with her 1.1 million followers on Instagram two pictures from the proposal that took place in Mykonos, Greece.

She captioned the romantic moment: "There’s no one I’d rather do this life with, here’s to a lifetime of us. Can’t wait to grow old together. I Love You."

The Algerian international footballer started dating the English model in February 2020 after separating from his English ex-wife, Rita Johal, as the exes have one daughter, Inaya Mahrez, 6.

Followers interacted greatly with Mahrez's engagement to the English fashionista, especially those interested in sports, as they commented: "His level will drop after marriage," "No, that's too much, Mahrez," and "Oh God, the star caught her."

The Sun newspaper had learned from friends close the British beauty’s family, that the Manchester City playmaker spent a total of £2,000,000, to buy a luxurious apartment in a fancy building, as a big step to upgrade his relationship with the supermodel, a year after their first meeting.

Press sources confirmed that Taylor's mother is the one handling interiors of Mahrez's new home, since she is a pioneer in the field of luxury real estate development, which helped her amass a fortune in millions, that also helped her to live in a £15m mansion, with her husband Ashley, the former footballer.

Vin Diesel Reveals Cardi B Will Return to F10

Qatar: No Need For Selling Bonds After Q1 Surplus

Selena Gomez Opens up About Her 'Cursed' Past Relationships