Tamer and Bassma made up, yet McDonald's is making marketing strategies out of their online arguments!

Last weekend, Moroccan fashion designer Bassma Boussel has announced that she and Tamer are preparing the divorce papers.

According to reports, the dispute happened due to Bassma's excessive jealousy from female fans around Tamer.

After a series of back and forth posts between the couple, as well as the intervention of their friends and many Arab a-listers, Hosny and Boussel finally made up, with Bassma apologizing to Tamer.

Although the disagreement is old news now, there was one line that Tamer used when he was settling the dispute that stuck up in people's minds and social media lines - hey that rhymed!

It was his forgiving message to Bassma: "Reckless, but I love you."

The line has become very popular on social media, even celebrities like Egyptian actor Fathi Abdul Wahab used it too.

Simultaneously, McDonald's Egypt has seen this as a great marketing opportunity, so they used it in of their promotional posts on Instagram.

They wrote: "Reckless, but I'm lovin it" connecting it to the famous original McDonald's slogan "I'm lovin it." 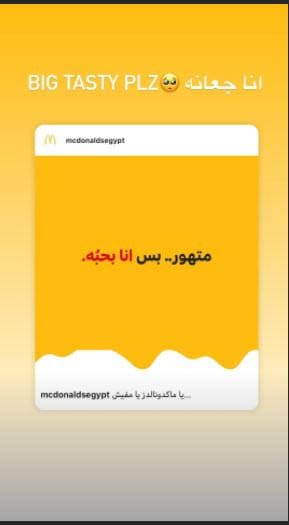 'Reckless, But I Love You! Tamer Hosny Makes an Official Statement Regarding Divorce Reports from Bassma Boussel
Tags:Bassma BousselTamer HosnyMcDonald'sEgypt