'Provocative'! First Response From Rawan Bin Hussain's Husband After She Branded Him "RAPIST"

Yesterday, Kuwaiti fashionista Rawan Bin Hussain exposed her husband Youssef Migariaf of Libyan nationality, and claimed that he cheated on her while she was pregnant, as well as infecting her with HPV Type 16 because he slept with random prostitutes.

Among 12 Stories she shared on Instagram revealing what happened, Rawan described her husband as "narcissistic psychopath."

Read more: 'He Infected Me With HPV After Sleeping With Prostitutes'! Rawan Bin Hussain Is Divorcing Her Libyan Husband

On his first indirect response to the scandal, Youssef proved Rawan's words right, by posting an image of him on Instagram Stories.

In the black and white picture, Youssef was sitting on a chair resting his elbow on a table while sporting sunglasses and a casual suit and looking up high. 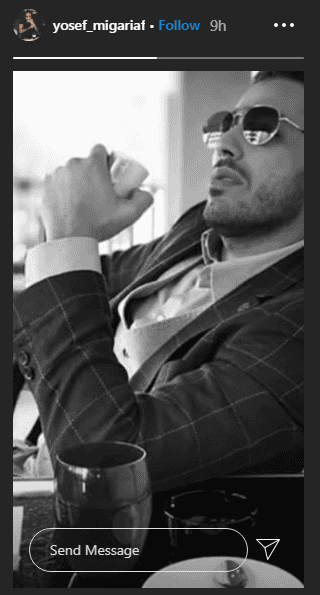 Social media users described the picture as "provocative and arrogant," especially with the timing of posting and not responding with any word despite of the huge scandals that are being circulated about him on the internet.