Published October 20th, 2021 - 09:11 GMT
the TV personality is now thinking of having a baby with the Blink-182 drummer
Highlights
Scott Disick feels like 'an outcast' since ex Kourtney Kardashian began dating Travis Barker

Kourtney Kardashian is still flying high after Travis Barker popped the question over the weekend. 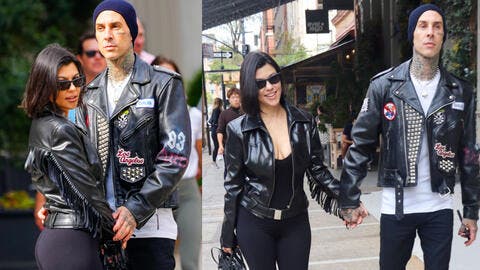 However, Kourtney's ex is not happy about the news, 'He avoids family get-togethers that Travis is at, and he has refused to be in the same room with him at times,The Kardashians adore Scott and tell him he's part of the family no matter what, but he feels very distant and feels like an outcast more than ever,' a source revealed.

And after the news of the love birds engagement, a source admitted that 'Scott is going crazy.'

'He's going to go off the deep end. It's really bad. It's about to get dark.'

Scott and Kourtney welcomed three kids over the span of their nine-year-old relationship.

Meanwhile, Scott's feelings are not stopping the newly engaged couple from showing off their love, earlier on Wednesday, Kardashian took to her Instagram page to share with her followers more pictures from the romantic engagement, ''I woke up all night thinking it was a dream.'' she wrote.

And the TV personality is now thinking of having a baby with the Blink-182 drummer, 'She can't wait to marry Travis and she would also love to have a baby with him,' a source said, and the Poosh founder previously revealed that she froze her eggs when she was 39-years old.