It was presumably the final vacation that Can Yaman and Diletta Leotta took together before the alleged end of their relationship. Before August, Turkish actor Can Yaman and his Italian bombshell, sports presenter Diletta Leotta, got us used to seeing them spending weekends and vacations together.

At the end of last July, the Turkish-Italian couple has spent one of the most romantic weekends in the waters of Capri, witnessed by tourists and paparazzi.

The alleged former couple was seen touring the stunning island hand-in-hand while fans took pictures of them.

The Mr. Wrong star sported one of his casual looks paring dark pants with a white shirt and sneakers. Meanwhile, The DAZN presenter paraded her fit figure in a thigh-high red dress and trendy sandals.

The romantic walk during sunset came after Yaman and Leotta were spotted by paparazzi lenses going intimate in a yacht.

The Erkenci Kuş star was enjoying the Capri sun and summer in a printed red trunks, while the sports enthusiast tanned in a dark navy bikini.

At first, Diletta was sitting on the boat bench having a phone call, before joining her claimed ex-boyfriend in the back of the yacht were he was tanning.

Following the Capri vacation, Diletta Leotta and Can Yaman have never been seen together again, sparking breakup rumors.

The separation gossips have intensified when Can did not attend Diletta's 30th birthday on August 16, he didn't even post a birthday wish on social media.

Since then, eagle-eyed fans have been closely watching the couple trying to get a sign to understand whether they are still together or not.

It was learned that the last picture they posted together was on July 12, when they watched Italy's victory in UEFA EURO 2020. 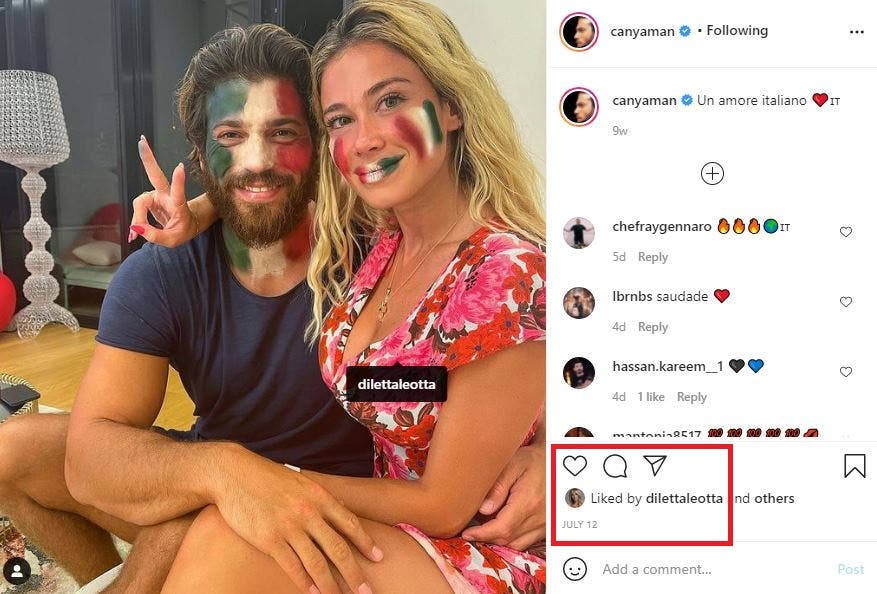 Followers of the couple on social media have noticed that Yaman and Leotta have stopped liking each other's pictures on Instagram.

Can and Diletta have not commented on the separation rumors yet.