Smack My Butt! Leaked Video of Nadine Njeim As a Man Approches Her Derriere In a Pool

Lebanese journalist Elie Bassil, who resides in Canada, has leaked a new video and claimed that it belongs to Lebanese actress Nadine Nassib Njeim. In the video, Nadine was sporting a one-piece swimsuit while dancing and drinking near a lavish pool with a handsome man.

In one shot, the man approached Njeim and touched her buttlocks, which prompted the actress to be heavily attacked on social media, not only for the scandalous video, but also for partying right after Lebanon was hit yet with another catastrophe, the fuel tank explosion in Al-Tilil Akkari town.

Nadine Njeim was labeled as 'hypocrite' by some followers, as they circulated her tweet praying for the explosion victims, and attached it with the partying video.

One follower mocked Nadine and wrote: 'Btw, she's so sad, and the evidence is that our brother is patting on her to calm her down', while another follower wrote: 'Wow, she has finally shown her truth. Many people know her, she is a snake.'

Meanwhile, many followers have doubted that the woman in the video is actually Nadine Njeim. 'Is This Angelina Jolie?!' Nadine Njeim Hailed For Her Performance in '2020' Series

A few hours after Elie Bassil has posted the video, he decided to delete it by justifying that people focused on the man with Nadine rather than focusing on the message he was trying to deliver, which is to stop hypocrisy and to try and help others.

Elie added that this is not the right time for this video that has turned into a celebrity scandal, and out of respect to the victims who were killed and wounded in the explosion, he decided to delete the video so that people won't get distracted from the real issue. 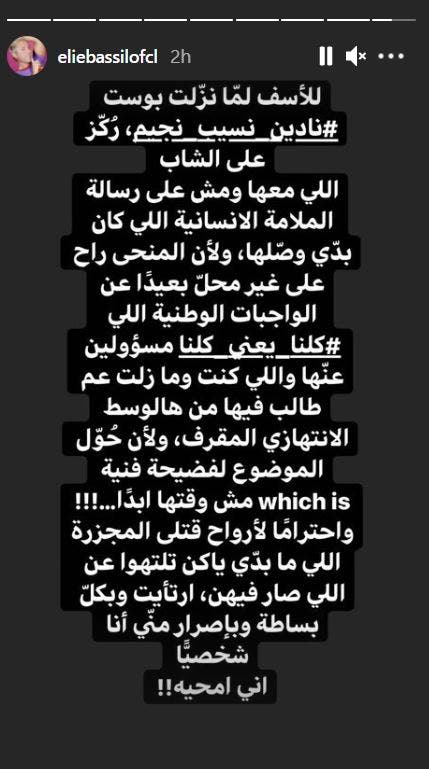